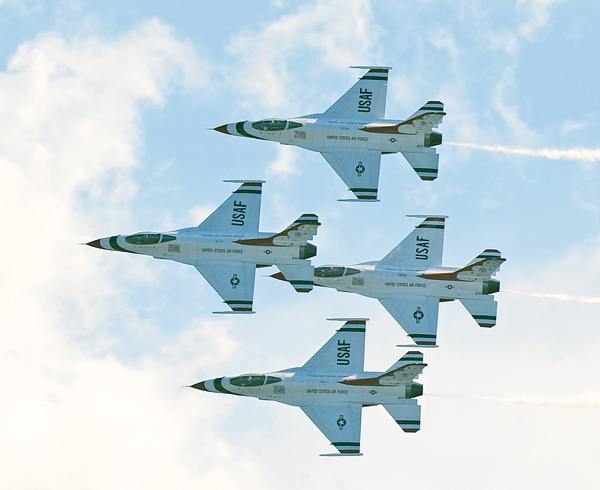 Pictured is part of the United States Air Force Thunderbirds display from a past Thunder of Niagara Air Show. (Photo by Kevin and Dawn Cobello, K&D Action Photo and Aerial Imaging)

Thu, May 10th 2018 07:00 am
Bigger, better lineup to excite at Niagara Falls Int. Airport
By David Yarger
Tribune Editor
We're just about a month away from the exhilarating action of the Thunder of Niagara Air Show and get ready - it's back and better than ever in 2018.
For those who enjoy hearing fighter jets scream across the skies, the sight of old fighter planes or are just flat out plane lovers - be prepared, because the 2018 edition of the Thunder of Niagara is planning to be one not to miss.
On Tuesday morning at the Niagara Falls Air Reserve Station, Commander of the 914th Air Refueling Wing Col. Mark Larson, Commander of the 107th Attack Wing Col. Bob Kilgore, director of the air show Maj. Ben Canetti and Vice Chairman of the Niagara Military Affairs Council Bill Wagner announced big plans for the upcoming show.
Getting to the lineup, Canetti summed it up as "striking gold." There are three major jet teams in North America and Canetti said two of the three will be featured at the show -- the United States Air Force Thunderbirds and the Canadian Royal Air Force Snowbirds. On top of the two teams, the show will include the F-22 tactical demo, an aircraft Canetti said, "people travel from all over the world to see fly."
The 2018 version of the Thunder of Niagara Air Show is slated for Saturday, June 9, and Sunday, June 10. The air show is free and gates open at 9 a.m., but two types of VIP tickets will be available. There will be 500 VIP tickets per day, with one type being a catered breakfast by Tim Hortons and a catered Brickyard Pub & B.B.Q. lunch VIP ticket for $165 and then a non-catered VIP ticket for $85. Each VIP ticket gets attendees entry at 8 a.m. (an hour earlier) and an up close and personal experience of the show. VIP tickets will be released to air show insiders at noon on May 17. Those interested in becoming an insider can visit www.thunderofniagara.com.
On top of the high-flying action, Canetti said the Experimental Aircraft Association and Lockheed Martin are going to bring flight simulators to give attendees a chance to test their skills in the cockpit of several jets. Canetti added that NASA will also be on hand to show their mobile display. 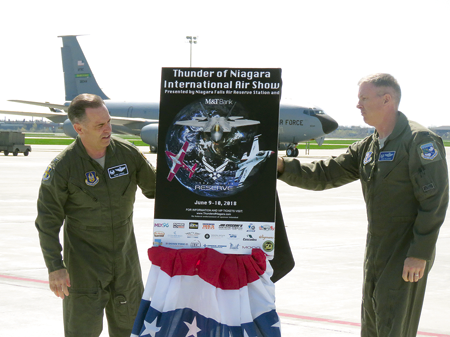 Col. Mark Larson and Col. Bob Kilgore unveil the 2018 poster for the Thunder of Niagara Air Show. (Photo by David Yarger)
Canetti and Wagner stressed that attendees should plan to arrive early due to the boosted air show lineup.
"Because of the performer lineup - the F-22, FA-18, the C-17, the Thunderbirds and the Snowbirds - this lineup is attracting a huge crowd that we can already judge from our Facebook responses, email and other forms of communication," Wagner said.
With the show expecting record crowds between 40,000 to 50,000 and more, Wagner recommended attendees parking off base compared to on base. Wagner recommended the Summit Park Mall, NFTA overflow lot, Niagara SPCA lot, Vantage Business Park off of Lockport Road; and a private lot on the west side of Tuscarora Road. All will include free shuttle services, which will have priority access from law enforcement.
Kilgore followed Wagner by announcing the 107th Attack Wing and the 914th Air Refueling Wing would be joining the community in the Memorial Day Parade in Niagara Falls. The parade will start at 10 a.m. on Saturday, May 26 and run from the City Market, down Pine Avenue and finish at the Niagara Falls Veterans Memorial.
Larson said people around the city may see planes buzzing around a few days prior to the actual show. He said, "The air show itself capstones a celebration that we and the reserves are having. This is our 70th anniversary of the Air Force Reserve, so there will be other events during the week."
Larson said a Wings of Heritage flight would take place on Thursday, June 7, with vintage airplanes flying over the Buffalo area. The same day, the Air Force band will play a show at 6 p.m. in Academy Park.
Each Thunder of Niagara Airshow provides a jolt of excitement to the community, but this year with the bolstered lineup, Canetti said there's reason for even more excitement.
"Our social media is going crazy with messages that a few of us have the pleasure to answer every night. We have people messaging us from the UK. I put out a message on our Facebook the other day just to test how many Canadians are coming down and I've heard from Quebec, Alberta, Vancouver; they're coming from all over. There are actually a lot of airshows in Canada coming down just to see how we pull this off. ... So, yeah, quite the buzz," Canetti said.
Wagner said the official lineup for the 2018 Thunder of Niagara Air Show, along with more information and details, will be fully revealed at noon on Monday, May 14, via the Thunder of Niagara Air Show website.
Categories
Around WNY Home feature NFP Top News Tribune Tribune feature Tribune HP Feature List Tribune HP Feature Picture