Local officials joined with NYPA leaders to unveil a new plaque on Tuesday.

Tue, May 8th 2018 03:30 pm
New historic marker unveiled at Power Vista
New York Power Authority representatives joined with local elected officials and members of local preservation groups at the Niagara Power Vista visitors center in Lewiston on Tuesday to commemorate the listing of NYPA's Niagara Power Project in the National Register of Historic Places.
NYPA Chairman John R. Koelmel and NYPA President and CEO Gil C. Quiniones joined with Niagara Falls Mayor Paul Dyster, Town of Lewiston Supervisor Steve Broderick and Village of Lewiston Deputy Mayor Bruce Sutherland to unveil - near the Power Vista's entranceway - a new historic designation marker, which recognizes the Niagara Power Project among the significant historic sites in the U.S.
Koelmel said, "Last year, we were very proud that this Niagara Power Project received a wonderful honor, being listed on the National Register of Historic Places. Today, we've chosen to gather to not only celebrate but commemorate that recognition with the unveiling of a historic register plaque."
He noted the marker identifies, "The important work that Thomas Edison and Nikola Tesla did right here at the birthplace of hydroelectricity and transmission.
"There is no question that the design and construction of this incredible Power Project was a fabulous engineering and construction milestone. We're very proud that it's now all part of the growing heritage tourism that attracts visitors to our region, in addition to the wonder of Niagara Falls, itself." 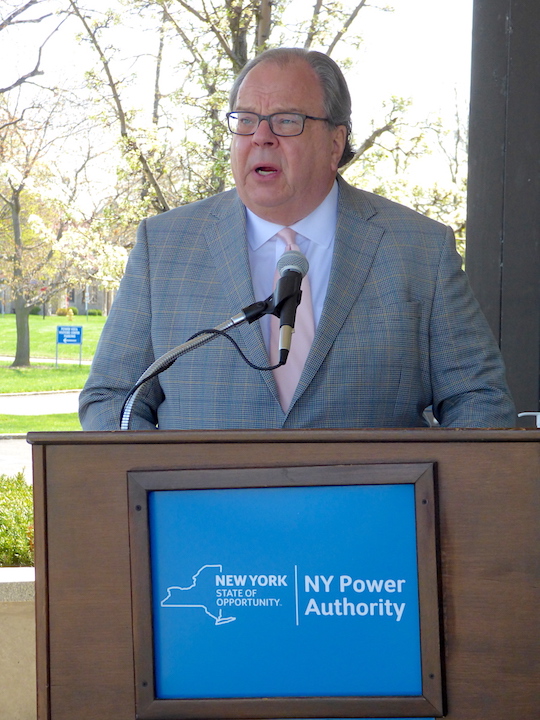 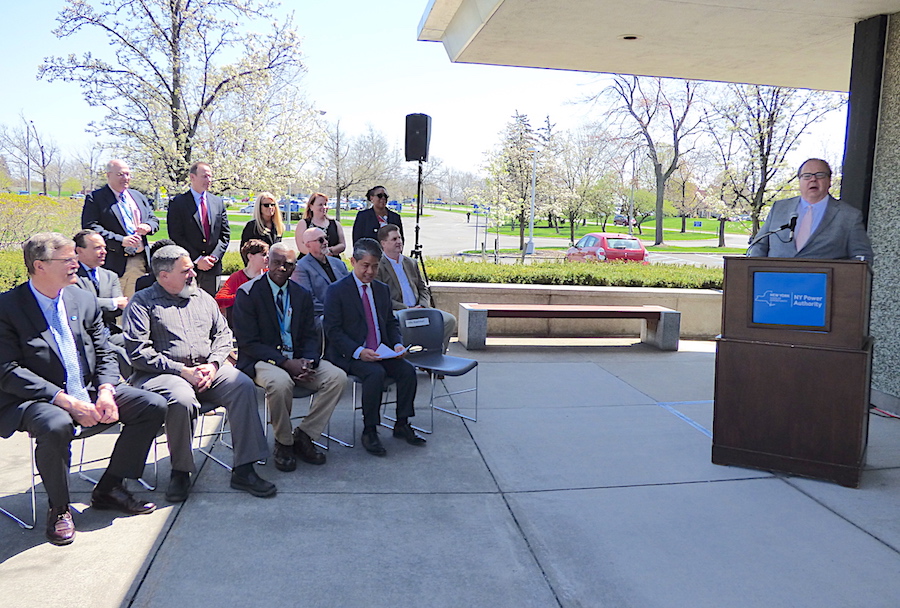 Quiniones said the facility is "really exceptional, and something for us all to be proud of." He noted, "I'm glad that we're putting the national register plaque right by the door of the Power Vista, so visitors can be reminded of the historic nature of this hydroelectric facility as one of standout public works initiatives of the mid-20th century. ... This plaque is also a tribute to everyone here who works at the plant and who has continued the tradition of excellence in every aspect of the project's operation."
He added, "This new plaque is a reminder of the rich and long history that we at the New York Power Authority have with the 'jewel in our crown,' our largest facility: the Niagara Power Project. Reflecting on the history of the Power Authority and the long line of men and women who worked to build, operate and maintain this premier project makes us greatly appreciate our roles as stewards charged with preserving this magnificent project, which provides clean, renewable hydropower to our state, for many years to come." 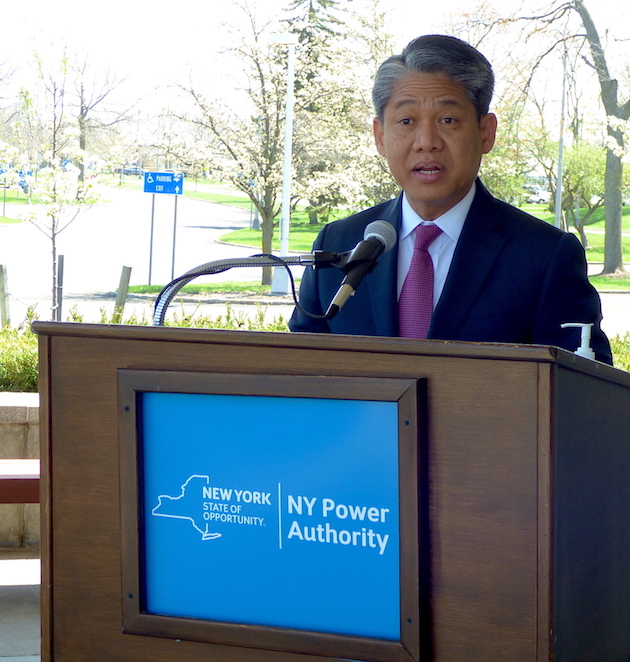 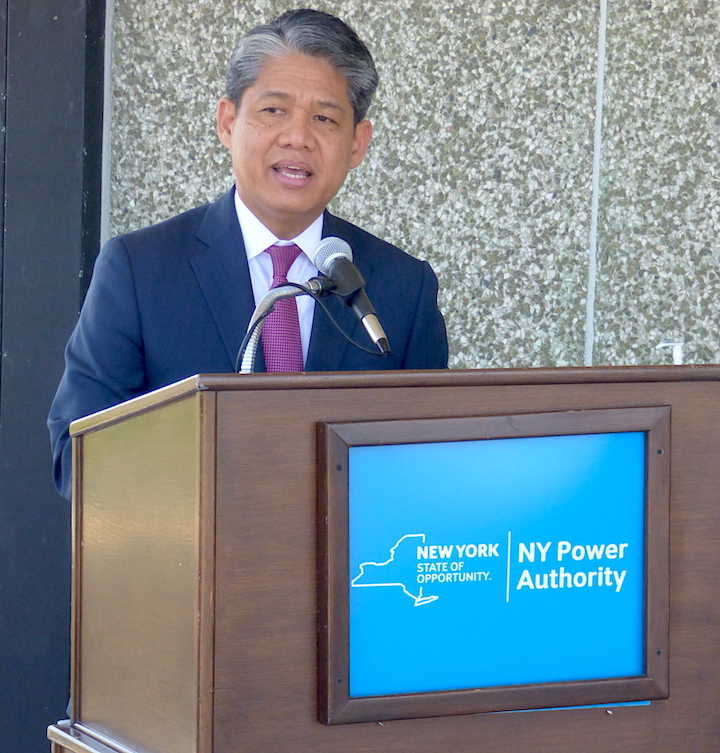 NYPA sought historic recognition from the U.S. Department of the Interior for the Niagara Power Project as an integrated public work, including six structures related to the hydroelectric power generation and transmission, as well as surrounding structures, like the project's administration building and Power Vista visitors center, and recreation facilities in Reservoir State Park.
Affirming the Niagara Power Project's massive scale and bold design, and the fact the project has remained largely unchanged since it was first completed in 1961, the New York State Historic Preservation Office recommended NYPA's application to the U.S. Department of the Interior, which administers the National Register of Historic Places. The Historic Places designation was conferred last year.
In its application, NYPA highlighted the massive scale and engineering represented by the project, which is the largest hydroelectric facility in New York state and one of the largest in the country. The engineering structures, which include the Robert Moses dam and power plant, and the Lewiston Pump Generating Plant, are executed in the Brutalist architectural style with utilitarian designs that express their sheer weight and massiveness with reinforced concrete, metal and stone.
The application also chronicled the use of the Modernist Miesian architectural style named after the architect Mies van der Rohe for its two prominent support buildings - the administration building and the Power Vista - which are characterized by modular rectangular forms established by structural steel frames, glass walls, precast concrete roofs and exterior wall panels.
The Niagara Power Project facilities were constructed under the direction of the New York City architectural firm of Slater and Chait with John B. Peterkin of New York City serving as consulting engineer. Supervising engineers were Uhl, Hall & Rich of Boston and the landscape design was by the firm of Clark and Rapuano, also of New York City.
First commercial power at the facility was in January 1961. The facility has the capability to produce 2,675,000 kilowatts of clean, renewable hydropower. 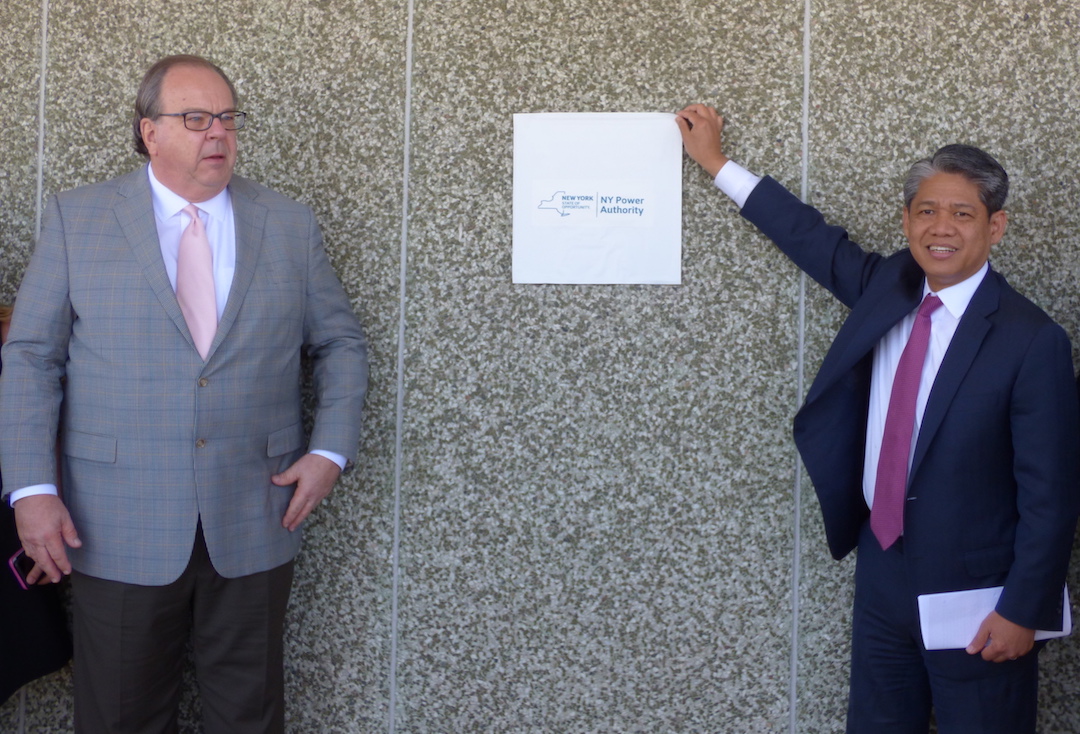 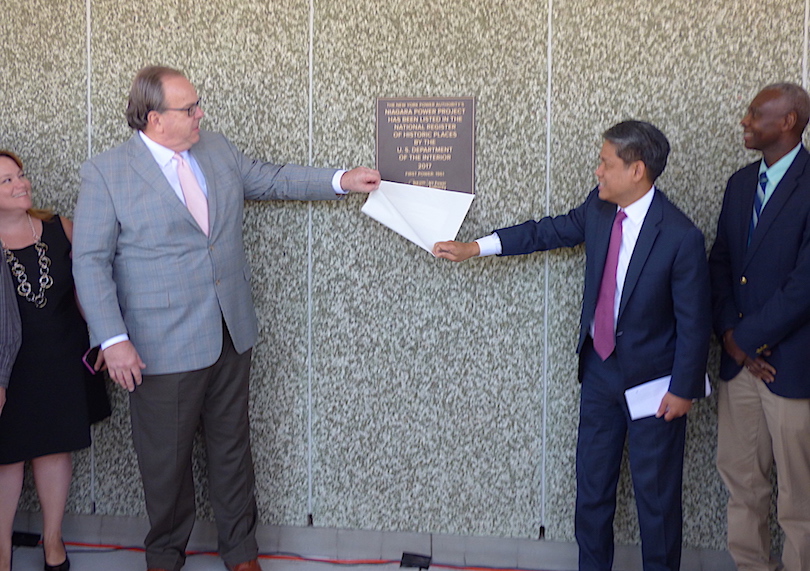 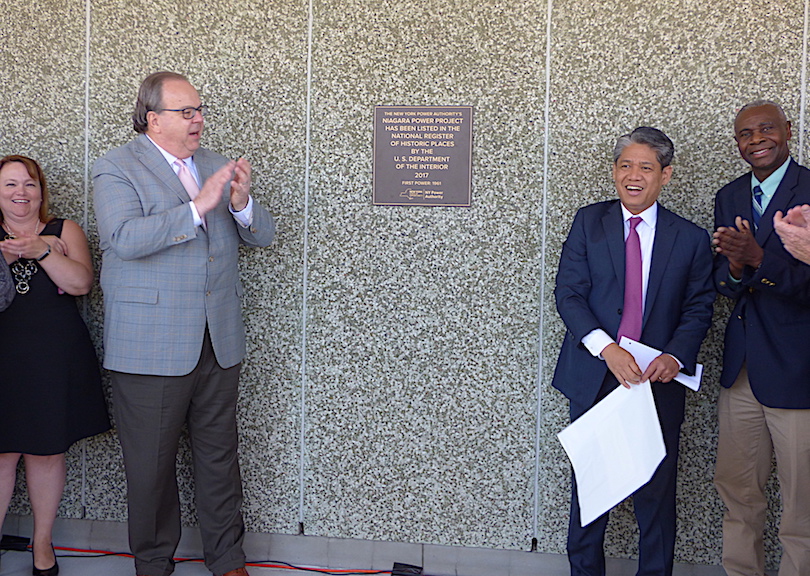 The marker is unveiled. 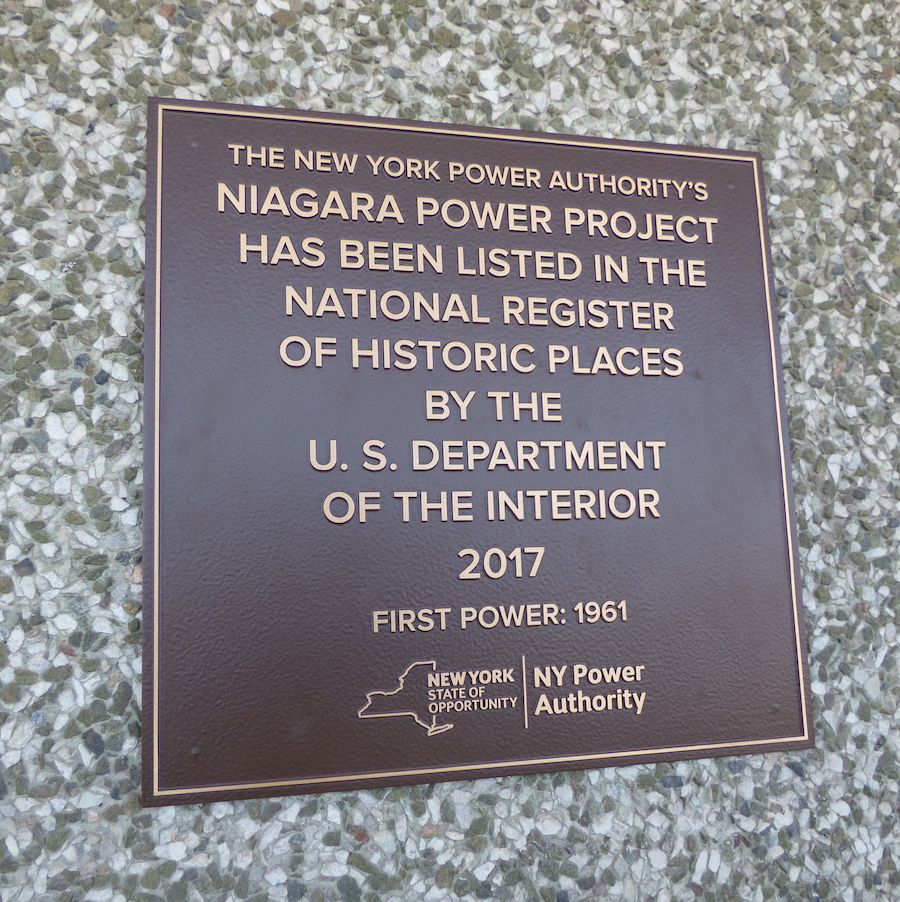 Not in attendance, but submitting comments for a press release, Congressman Brian Higgins said, "More than 50 years ago, Western New York demonstrated initiative ahead of its time by capitalizing on the resources that were naturally ours to create the Niagara Power Project. Through this engineering wonder, the lake that fuels the river that feeds Niagara Falls was directed to produce the cleanest, cheapest hydropower in the United States. The Niagara Power Project plays a central role in our region's history and future, and this designation affirms that standing."
New York State Sen. Rob Ortt said, "For decades, the Niagara Power Project has served as an example of technological advancement and human ingenuity. This new designation marker not only recognizes the historic value of the power facility, but also symbolizes the commitment and forward thinking the workers and engineers of the past had toward a sustainable and clean energy source. It's vital to Western New York and I encourage all who have yet to visit and tour the facility's grounds to stop by and learn of the historic and technological implications this project has had on the development of energy in our state and our nation."
Assemblyman Angelo J. Morinello said, "Being placed on the National Register of Historic Places in the United States is not only a great honor, but also a well-deserved recognition for the New York Power Authority and the Niagara Power Project. This is a true example of renewable energy using a natural resource to produce power."
Dyster said, "The Niagara Power Project has long stood not only as a modern-day feat of engineering, but as a testament to the men and women as strong and steadfast as the project itself who continue to make the mission of the New York Power Authority possible. They, along with Gil Quinones and team should be congratulated on this unique distinction and for their efforts to ensure that the story of the Niagara Power Project will be preserved for generations to come." 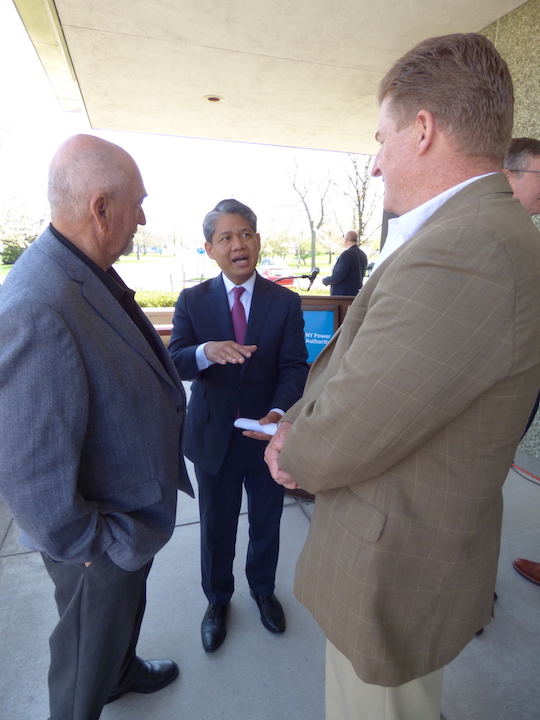 Quiniones speaks with Brucer Sutherland and Steve Broderick (also pictured with the plaque). 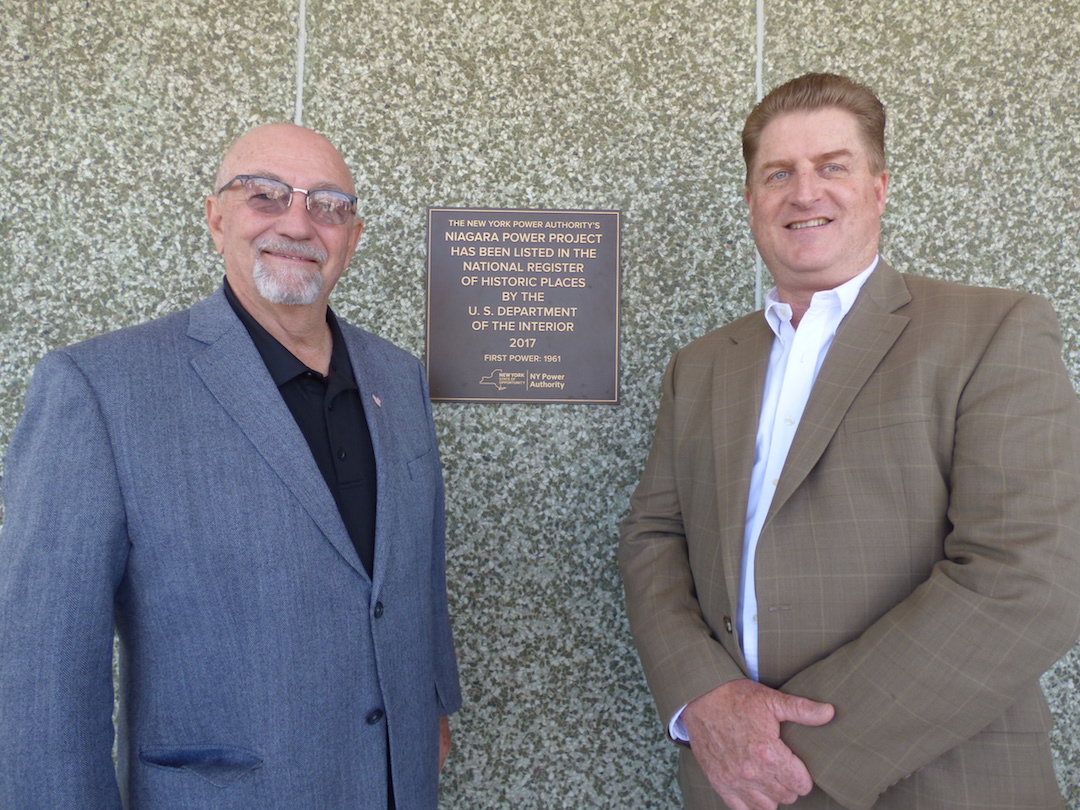 Broderick said, "The Town of Lewiston is proud to learn of the New York Power Authority's Niagara Power Project being placed on the National Register of historic places. As the host community of the Niagara Power Project, it is with great honor that we were asked to participate in this celebration. The New York Power Authority has been a great neighbor and we look forward to a continued relationship."
About NYPA
NYPA is the largest state public power organization in the nation, operating 16 generating facilities and more than 1,400 circuit-miles of transmission lines. More than 70 percent of the electricity NYPA produces is clean renewable hydropower. NYPA uses no tax money or state credit. It finances its operations through the sale of bonds and revenues earned in large part through sales of electricity. For more information, visit www.nypa.gov. 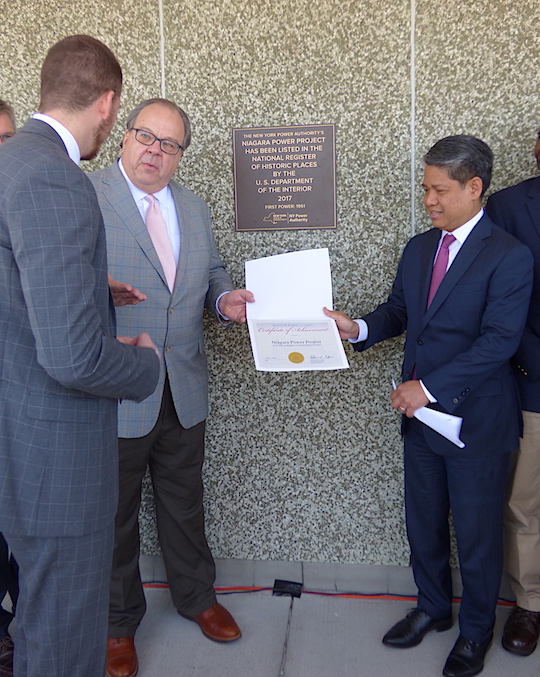