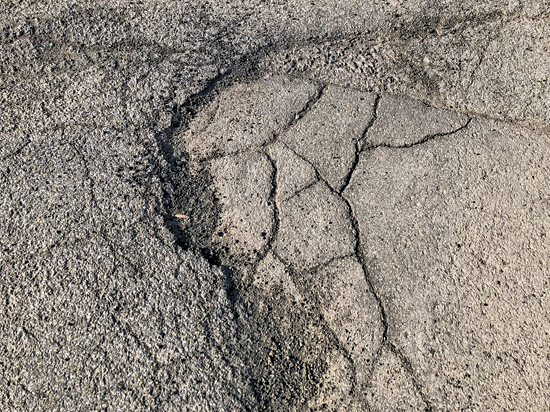 Pictured is a section of roadway in the Morgan Farms subdivision.

Post-winter headaches in Town of Lewiston

Sat, Apr 28th 2018 07:00 am
By Terry Duffy
Editor-in-Chief
Spring has sprung. With it, post-winter road repairs, paving, waterlines and flooding occupied a portion of an otherwise low-key session of the Lewiston Town Board on Monday.
Resident Mark Elias inquired on the rough road conditions plaguing Morgan Drive, the Morgan Farms area and the town's plans on addressing the matter. Jumping right into it, Town Highway Superintendent Dave Trane replied the town's considerable schedule of road related work and repairs is at last underway, with paving delays thus far placed on the prolonged winter type weather conditions.
"Today's the first nice day we've had of the year," Trane said, referencing last Monday's balmy spring weather. "They probably won't start making hot patch till the end of this week; as soon as I get that I can start (with paving)."
Trane said town highway crews would likely begin with the Pletcher Road paving job on the north end and work their way down. "It's not something we're avoiding," said Trane to the resident.
"It's the first nice day; we still have plows on our trucks. I can't get everything done (at once)."
But winter is not the only reason for road paving hang-ups, it was soon learned. The town's pending waterline replacement project, a significant $10 million undertaking approved last year by the Town Board for northern Lewiston is also forecasted to impact a long list of needed road paving projects.
Trane said that water lines on Morgan Drive are among those on the list to be replaced and that, for the time being, the town would be handling needed repairs on Morgan, as well as others awaiting new waterlines, with a series of hot patch repairs versus a complete milling and repaving.
Expanding on the waterline project Town Engineer Robert Lannon told Town Board members that the actual replacement work and completion is still a few years down the road. "The schedule for the waterline at this point is the surveys are being conducted and parts of that are under design," said Lannon. "We're targeting to advertise for bids, pending approval" of the town water department, Niagara County Health Department and others - a process he forecasted should be complete by later this fall.
"We anticipate (it) at this point to be about an 18-month construction duration. We're still a little way yet from laying waterline in the ground."
On a question from Town Councilman Al Bax as to "how long" would the town need to continue the temporary repairs to roads until the waterline is actually completed and new paving can be addressed, Trane replied, "It's going to be two years down the road."
"The waterline at this point, in real broad strokes might be completed two years from now," said Lannon. "However, just to be clear, that includes new waterlines, valves, hydrants. It includes trench restoration, but not full road reconstruction."
The delays on addressing Morgan Drive paving were not what the resident necessarily wanted to hear. "I can tell you from experience, there is no way that Morgan Drive is going to last two years, just patching potholes," said Elias. "It's a mess, somebody's going to get hurt; there's a lot of walkers, a lot of cul-de-sacs in that neighborhood. Somebody's going to get hurt."
"There's a lot of roads, some county roads in the town that are in real rough condition," said Town Supervisor Steve Broderick.
"Our hardest part is keeping our good roads good," added Trane, adding that roads that were paved just two to three years ago are already showing problems with potholes. "It's becoming a problem for the whole town."
Wrapping up, Jeff Ritter, superintendent of the Lewiston wastewater treatment plant briefly discussed the heavy rains of April 15-16 that resulted in numerous reports of unwelcomed flooding problems in the town.
"Between Sunday, April 15, and Monday, April 16, (the) Town of Lewiston experienced nearly 3 inches of precipitation in addition to snow melt," Ritter said. "As a result, yards and ditches, as well as the town's sewer collection system, were filled beyond capacity. This resulted in multiple sewer backups in homes, low-lying areas with sewer laterals under their basement slabs.
"As town residents I want you to be aware the Lewiston Sewer Department has been proactive in its efforts to repair the aging infrastructure since the 1990s," he said.
Ritter said this work continues and that Lewiston remains focused on the needed work to prevent the extent of sanitary sewer overflows in the town through limits on inflow/infiltration.
"The town has been working diligently on this plan," he said.
Categories
NFP Sentinel Sentinel HP Feature List