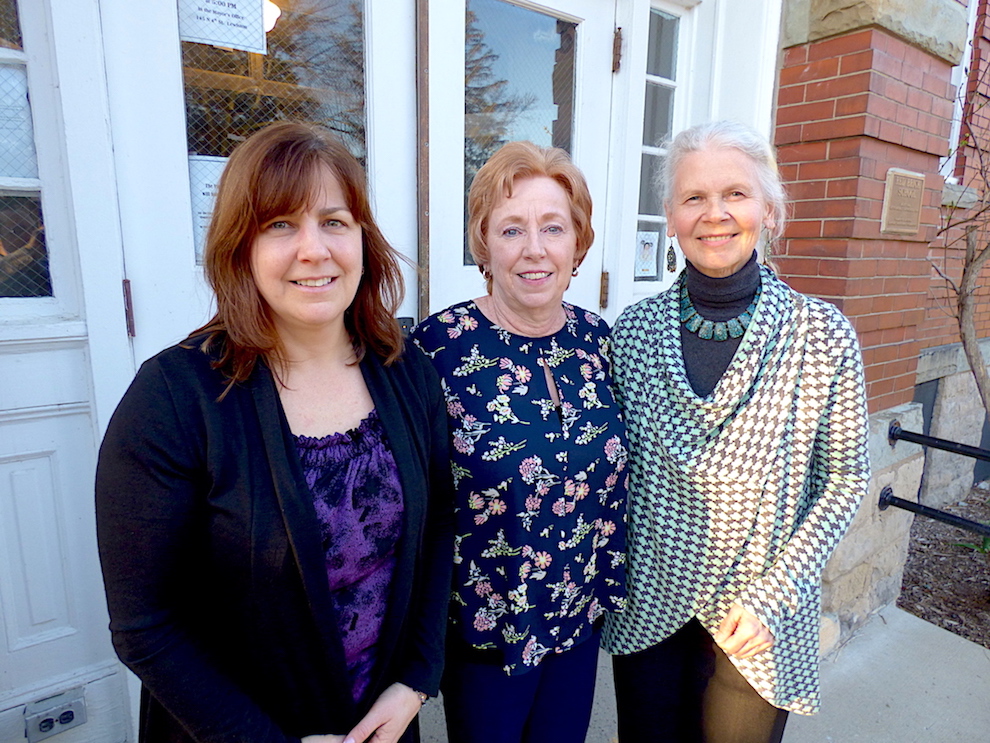 by jmaloni
Thu, Apr 26th 2018 08:05 pm
By Joshua Maloni
Managing Editor
Longtime Village of Lewiston Clerk/Treasurer Anne Welch received the Democrat Party nomination for mayor at Thursday's caucus, and will challenge Bruce Sutherland in the June 19 election.
Welch, a Republican, sought the GOP endorsement at Tuesday's caucus. She lost the vote to Sutherland, but was quickly nominated for trustee. Welch won that bid, but on Thursday said she would decline it to pursue the village's top elected office.
To the applause of nearly 60 people inside the Morgan Lewis Village Boardroom, the Democrats selected three women - including trustee candidates Claudia Marasco and Tina Coppins.
With Welch set to decline the GOP nod for trustee, Marasco, the third-place finisher on Tuesday, also will be a Republican nominee. Incumbent Vic Eydt is the other Republican selection for trustee.
Two, four-year positions are available. The position of mayor also carries a four-year term. 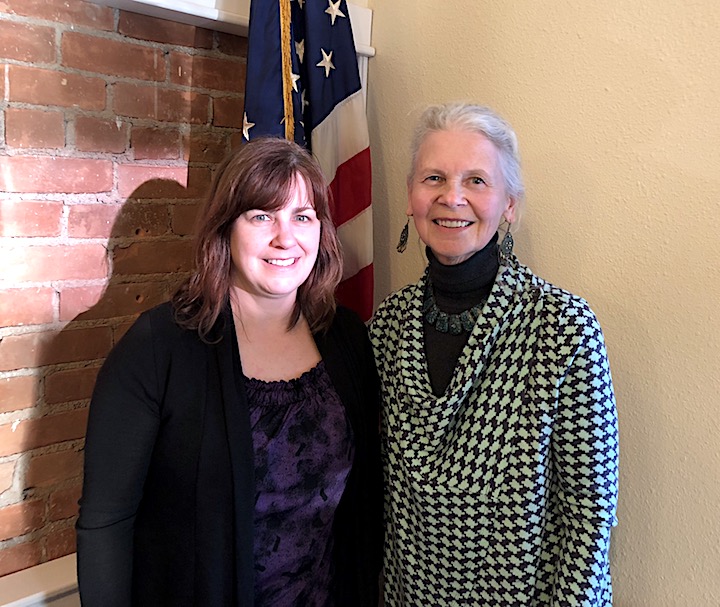 Coppins and Marasco.
Welch presently serves as vice chairwoman of the village's Planning Commission. In 1983, she was hired by the Village of Lewiston to serve in the clerk's office. Welch was promoted to deputy clerk and then to clerk/treasurer. She served in that capacity until her retirement in 2014.
During her time with the village, Welch served as the clerk to the Historic Preservation Commission, the Planning Commission and the Zoning Board of Appeals. She also served on the village's master plan, zoning update and Local Waterfront Revitalization Program committees.
Welch is a 1968 graduate of Lewiston-Porter High School. She completed courses through the New York State Department of State Building and Codes Administration, the New York Conference of Mayors Clerk's School, and attended the state seminar on historic preservation, planning and zoning. Welch was a member of the New York State Society of Municipal Finance Officers, the New York State Association of City and Village Clerks, and the Niagara County Clerk's Association.
Over the years, her success and dedication to Lewiston earned her many awards, including the 2001 "Community Leaders Award" from the Niagara Falls Chamber of Commerce, the "New York Conference of Mayor's 30 Years of Service Award," and the Historic Association of Lewiston's "Friend of History Award."
Welch has recently chaired the Memorial Day parade and reception, while also opening her home for the Lewiston Garden Walk and Historical Association of Lewiston's Tour of Homes.
Anne is married to Robert Welch. They have three children - Robert, Michele and Michael - and eight grandchildren.
Marasco serves on the Village of Lewiston Planning Commission and is a frequent attendee at Village Board and Historic Preservation Commission meetings. She helped found and fund the "Invest in a Vest" program that outfitted Lewiston Police Department officers with new tactical ballistic vests.
Marasco heads up the volunteer group collecting money and food donations for Ransomville's Care-n-Share food pantry, Community Missions and Heart, Love & Soul. Marasco and her team accumulate items outside of Artpark prior to the summer "Tuesdays in the Park" concerts.
Year-round, Marasco can be found at the International Peace Garden, where she volunteers as a caretaker.
She was the recipient of the Village of Lewiston Citizen of the Year in 2010 and 2017. Her additional honors include the Paul Harris Fellow Rotary International Award, the New York State Senate's "Woman of Distinction," Community Missions of Niagara Falls awardee and the Lewiston Police Department's William H. Galls Memorial Award.
Marasco received a bachelor's degree in history and political science from the University of Minnesota and a master's degree in education from Niagara University. She also has an advanced graduate degree in school counseling.
Coppins is a property manager, a position she has held for almost two decades. She oversees a 425,000-square-foot property, which has approximately 2,000 people employed within its walls. She manages a $1.8 million expense budget, which includes capital improvements. Coppins also is working with an architect and contractor on a $3.75 million housing project.
A frequent visitor to Center Street businesses, and a member of Embody Health & Wellness, Coppins is well versed on Lewiston. When she wed her husband, Peter, she married into the Coppins Service Station family. The village fixture has been in operation since 1937.
Tina and Peter (a member of the Historic Preservation Commission) have two sons. She serves as a member and treasurer of the Cheektowaga Chamber of Commerce. Coppins also is past president of the Greater Buffalo Building Owners and Managers Association. 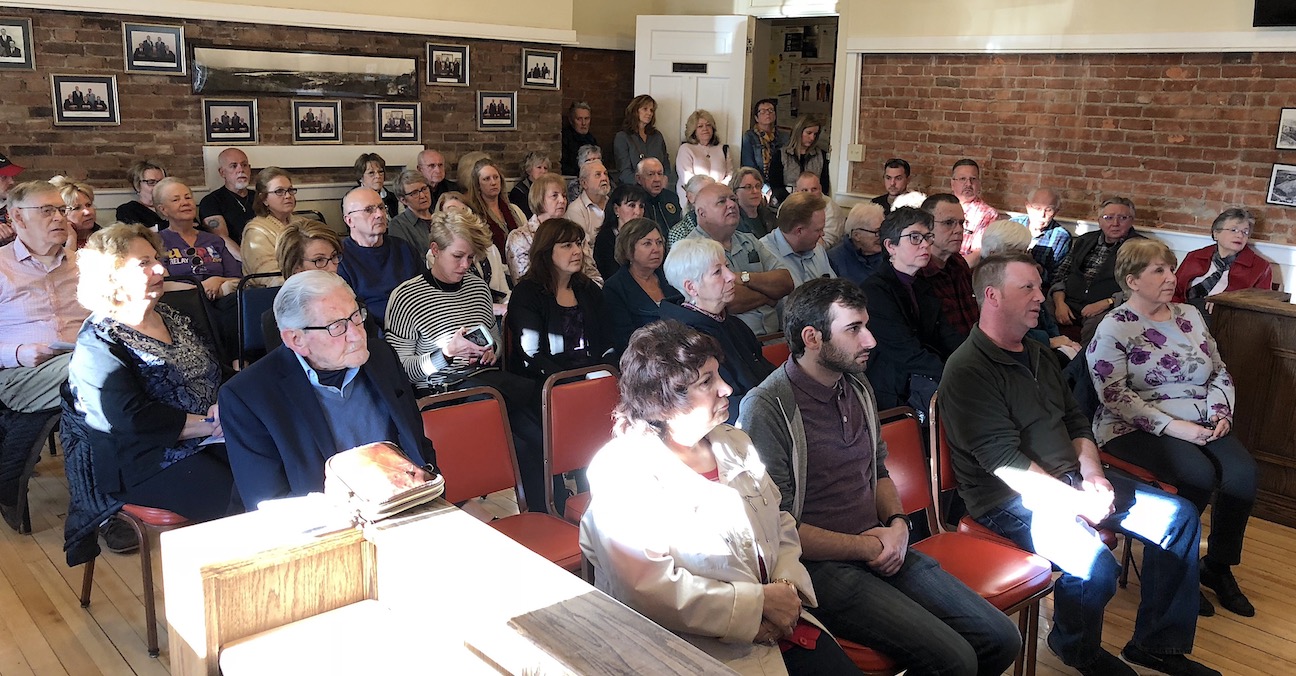 A look inside the Democrat Party caucus room.
Sutherland has served two terms as deputy mayor.
He has lived in Lewiston for nearly 15 years. Earlier in his career, he was a member of the Air Force for 26 years, serving as commander of the 463rd Tactical Airlift Wing and the vice commander of the 7th Bomb Wing. Sutherland retired from active duty and went on to work for almost 12 years as a pilot for Southwest Airlines.
He is a charter member of the Lew-Port Alumni Association. Sutherland graduated from the Creek Road campus in 1964, and then from Niagara County Community College, State University of New York at Geneseo and the University of Southern California.
Sutherland is a member of the Historical Association of Lewiston and Niagara Frontier Country Club, in addition to being a lifetime member of the Air Force Association.
Bruce and his wife, Jackie, have three children and four grandchildren.
Eydt has served the Village of Lewiston since 1993. He was a member of the Planning and Historic Preservation Commission and served as chairman before joining the Village Board. Eydt will seek a third term as trustee.
He is involved in many of the village's community volunteer organizations. Eydt is a member of the Historical Association of Lewiston, junior governor of Lower Niagara Moose Lodge 584, a board member of Lewiston's Memorial Day remembrance committee, and works with the Niagara Region Chamber of Commerce's annual Lewiston Smelt Festival.
The Democrat Party did not reveal the caucus vote totals.
William Gallagher served as caucus chairman. Party Chairwoman Diane Perri Roberts offered opening remarks.
Categories
Home feature NFP Sentinel Sentinel feature
comments powered by Disqus