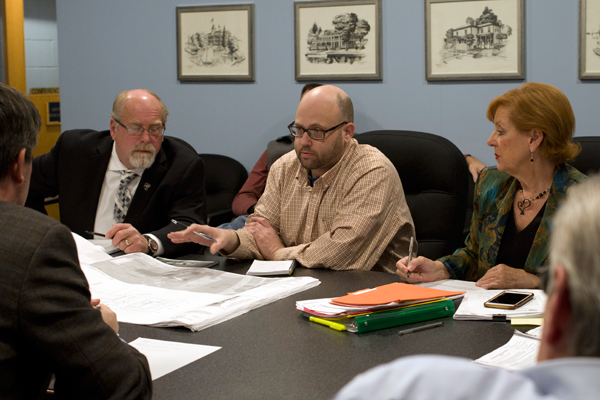 Jim Churchill, center, of Churchill Architectural, reviews diagrams with Grand Island Town Board members Monday during a work session at Town Hall. Councilmembers were reviewing plans for a pavilion in Veterans Park. (Photo by Larry Austin)

Sat, Mar 24th 2018 07:00 am
By Larry Austin
Island Dispatch Editor
With many citing a need to protect the Island environment, members of the public spoke at a hearing in support of a local law that would ban travel plazas townwide.
Monday at Town Hall, during a regular monthly meeting of the Grand Island Town Board, residents supported local law intro No. 1 of 2018 to amend the zoning code of Grand Island to regulate truck stops/travel plazas. The proposed law came after informal plans were made by Love's Travel Stops to build a truck stop on Whitehaven Road.
Resident Mike Jablon said residents "beg the board" for action. He said he was on the road for 30 years, and in his experience, no matter how truck stop companies try to keep their facilities clean, there will be pollution and diesel fuel dumped. Considering residents think of Grand Island as a town known for parks and green areas, building a truck stop would be "about the worst thing that could happen to Grand Island."
Nicole Gerber thanked the board for taking action on the law, and said residents appreciate the town's quick response.
Liz Lutnick reminded the board that the Island is "a closed eco-system" and that there were plenty of other areas for truck stops companies to set up near Niagara Falls and Buffalo that are already concreted and cemented over.
Bob Eddy of Staley Road favored the law and pointed to the parking area at the Burger King on Grand Island and Staley Road, where he said trucks are parked all the time. There, "You'll find all the stuff that truckers leave behind. He also complained about noise pollution, saying he can hear traffic coming from a mile away when he is sitting on his deck.
The audience applauded Sara Schultz of the Sierra Club Niagara, who said diesel engines are one of the most pervasive sources of pollution and contribute to health problems and death. "Everything we do today will matter tomorrow," she said.
Ron Rezabek of Havenwood Lane supported the law but said it "missed the key part for Grand Islanders." It needed to address the stream corridors of Grand Island, saying that both a proposed truck stop on Whitehaven Road and the Burger King were located near headwaters of two of the six major creeks on Grand Island.
Town Supervisor Nathan McMurray said, "This law is a zoning law," not an environmental law. He read the law to the audience and pointed out that it would not apply to gas stations like the NOCO on the boulevard, nor would the law apply to existing repair shops.
After the public hearing, at which no one spoke in opposition to the law, McMurray said he has worked on many issues in his time as supervisor, but the travel plaza law is one of the rare instances that an issue has received the Island's 100 percent support.
He added that the law could not be passed that night, but once a 30-day time limit expired, the board would vote and submit it to the state. Nine days remained as of Monday.
Veterans Park Pavilion
Jim Churchill of Churchill Architectural met with the Town Board during a work session that preceded the regular meeting to review diagrams and discuss options pertaining to a proposed pavilion in Veterans Park.
The pavilion idea began as an accessory to the current Little League snack stand, but grew in cost and size like a Chia pet.
Town Engineer Bob Westfall said, "We were heading down a very dreary avenue" as the original concept of a shelter morphed into what McMurray likened to a ski lodge. Churchill pegged the cost of that concept plan at north of half a million dollars and closer to $600,000, which made the councilmembers balk.
At the work session, the board reviewed options and favored a more modest project for a pavilion in the neighborhood of $200,000 and constructed in phases, and one that might incorporate materials already purchased.
"That park is overwhelmed in summer," McMurray said pointed out, saying ballplayers needed shelter from the elements.
The board agreed to have Churchill put a plan together for a phase 1 design, with his work cost not to exceed $4,000.
Welcome Center
The 100 percent agreement at the meeting ended after the public hearing as McMurray and Councilman Mike Madigan argued about the welcome center under construction on Alvin Road.
At both the regular meeting and a work session that preceded the regular meeting, Madigan and McMurray traded charges of misinformation.
Madigan called "obsolete welcome center plans" discussed at a Feb. 5 board meeting are not what went out to bid, and instead bids for the welcome center include plans to tie in to the town's sewer system. McMurray denied the claim and also pointed out "they don't get a sewer unless we say yes." 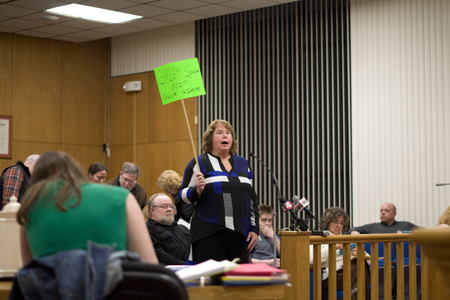