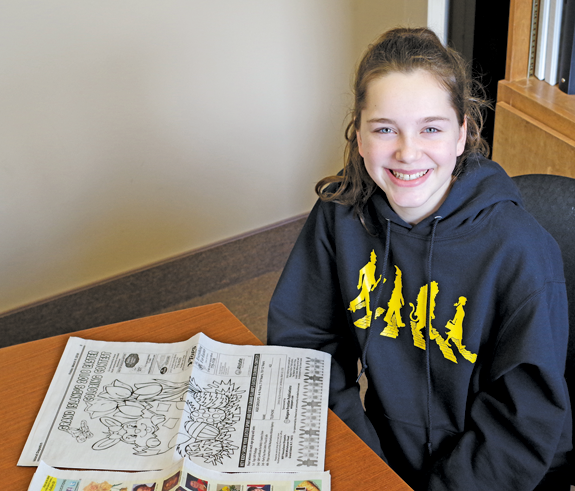 Rebekah Thompson won three firsts, four seconds and five thirds in the Island Dispatch/Grand Island PennySaver coloring contests. (Kids, your chances of winning are better now that Rebekah is too old to enter the contest.)

You can win the Island Dispatch Easter Coloring Contest!

Sat, Mar 17th 2018 07:00 am
Story and photo by Larry Austin
Island Dispatch Editor
Rebekah Thompson remembers the first time she ever entered an Island Dispatch coloring contest. She didn't win a prize, but her older sister won a gift card, and that just ignited an artistic and competitive fire.
"Whenever my sister won, she always got prizes. I was like, 'Oooh, I want a gift card, too,'" Rebekah said.
The second time Rebekah entered the contest, she won a stuffed animal. It was the start of an unmatched string of success. According to the Dispatch's unofficial totals, Rebekah won a prize in the newspaper's coloring contests a dozen times, more than anyone else ever.
"What I liked about it, I'm a very competitive person, so whenever my sister and I did it, I always liked to try and beat her. If you're competitive, it'll be fun," she said of the contest. "The prizes are great. And it's nice to be creative because in school and stuff, you're always forced to do projects. You have to draw this, or you have to make this. But this, it's kind of like your own creation, so you get to do whatever you want."
This year's Easter Coloring Contest entry form was printed in the March 9 Dispatch and March 13 Grand Island PennySaver. Extra entry forms are also available at the contest sponsors: Tops Markets, John's Pizza & Subs, Kelly's Country Store, and Allstate Insurance.
Now, 13, Rebekah has aged out of the contest, which is open to children ages 4 to 12. She still shares her secrets with a younger neighbor, who knew her record of success. "I would sometimes give her tips and stuff because she's like, 'Oh, you always win so many times.'"
So what is her secret?
"The key is not to just color, you have to draw, too, and add your own touches," Rebekah said, explaining that at Easter she would draw her own patterns on the eggs and draw a bunny or chick, to make the design more interesting. For the Christmas contest, she would add glitter and decorate trees.
She didn't use marker, because the ink bleeds together. "I liked colored pencils because you can blend the colors together nicely and they're a lot easier to control than markers, too. They have a nice, smooth finish. Crayons sometimes look waxy."
She preferred to do her drawing on the entry forms available at Tops, rather than on newsprint, because she said the white paper makes the design look pretty and vibrant.
Rebekah's mom, Carolyn, liked the contest because it gave her children and their friends and neighbors a chance to work together. "It's just fun to see kids be creative. They don't have enough opportunities today to be creative when they're younger," she said. "It's good old-fashioned fun. It's not online, and it forces them to get offline and use different media."
Perhaps no one in the family enjoyed the contest more than Rebekah's father, Bob, whose favorite prize was the party tray from John's.
"Whenever I'd tell my dad that I won, he's like, 'Oh, what's your prize? Did you win the pizza?"
Categories
Dispatch Dispatch feature