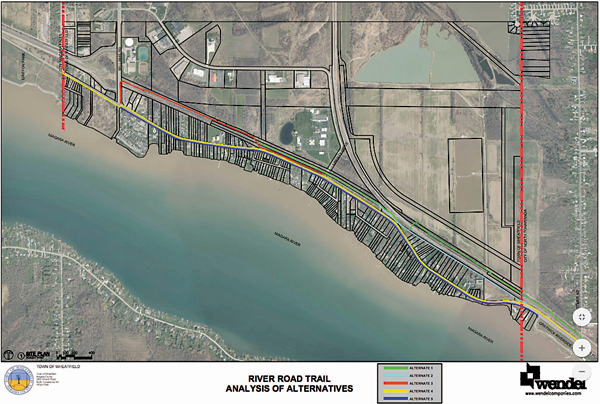 Pictured are the five different alternatives for a River trail that would run from Gratwick Park in North Tonawanda to the City of Niagara Falls line at 102nd Street.

Fri, Mar 9th 2018 05:55 pm
By David Yarger
Tribune Editor
Last Wednesday, Town of Wheatfield residents gathered to view five alternatives for the Niagara River multiuse trail that would extend from the City of North Tonawanda line to the City of Niagara Falls line along River Road.
The alternatives were presented by Wendel Engineers, the town's engineering firm, and the Department of Transportation was also on hand to answer questions and hear opinions from residents.
The first alternative in green would require a 20-foot high bridge be constructed for pedestrians to cross over due to CSX railroads. The route would also cut through the backwoods behind homes on the north side of River Road. The alternative accrued the highest cost, estimated at $6,317,000.
Alternative two in light blue started at Gratwick Park on the north side of River Road and ran along residents' backyards, but Tim Zuber of Wendel said, "There's not enough room; CSX won't let us in their right-of-way, so we would have to ask the folks for some 20 to 30 feet of the back of their property."
Zuber added that meetings had been held prior to the Wednesday open house and no residents were interested in giving up parts of their land. The alternative was an estimated cost of $3,381,000.
Alternative three in red had the trail running down the north side of the road from Gratwick, then crossing into a backwoods trail around Liberty Drive, down to Williams Road, then down River Road to 102nd Street. This alternative was an estimated cost of $3,237,000.
The majority of the fourth alternative in yellow runs along the north side of River Road, until Williams Road, where it crosses over to the south side of River Road and down to 102nd Street. Zuber said alternatives four and five would cause less of an environmental impact than the others. This alternative was an estimated cost of $3,607,000.
The fifth alternative in dark blue runs all along the south side of River Road from Gratwick to 102nd Street. The final alternative was an estimated cost of $3,982,000.
An opinion voiced heavily was safety, which Zuber addressed saying, "If someone has a heart attack and emergency services can get right there (along River Road), opposed to having to drive down the trail.
"The trail can be a little narrower too, because it's right along the road. Once they go off road, they have to be at least 12 feet wide so emergency people can get down there."
Another concern for the backwoods trails is that ATVs use the backwoods as a trail. Policing that ATVs or snowmobiles don't use the trail would be another significant factor.
One resident residing along River Road commented putting the trail behind homes felt like "an invasion of privacy," and she advocated for the trail to be in front of homes along the road.
Another resident said "I think we're fortunate to having a bike trail put in that will connect us all the way to the Falls."
The trail, when finished in Wheatfield, would connect from Buffalo to the Town of Porter.
Another big debate was whether the DOT would take over the project from the Town of Wheatfield.
A representative from the DOT said the state group would not take over the project and they had no money for the project.
Councilman Larry Helwig replied, "I think our hopes are that they're going to take it over. They haven't officially taken it over."
Helwig also voiced his concern over some alternatives, saying he felt River Road was a dangerous spot due to the 45-mile-per-hour speed limit, as well as traffic accidents that occur at times.
Leanne Voit, project manager from Wendel, said the DOT has a process they go through, which involves evaluations.
Helwig and Voit added that public involvement had been difficult, but the showing Wednesday night was the greatest they'd seen for the project.
Voit mentioned choosing correct routes was also difficult, because "there are so many different ways that you can go here. ... Coming up with the best route, evaluating how much each might cost and really trying to dive into the details without getting too far ... has all been pretty challenging."
Voit said she heard a "pretty even consensus" at the open house and a major concern amongst residents was safety.
No recommended alternative was given by Wendel or the DOT at the presentation.
For more information of the project, visit the Town of Wheatfield's website at www.wheatfield.ny.us. To submit comments, questions or concerns on the project, contact a project representative at [email protected].
Categories
NFP Tribune Tribune feature Tribune HP Feature Picture