Sat, Mar 3rd 2018 07:00 am
After 18 months of meetings and public input sessions, consultants helping the Town of Grand Island develop a new comprehensive master plan presented the first update to the public Wednesday.
About 75 people attended the comprehensive plan meeting in the Grand Viking Theater of Grand Island High School. Prior to presenting the plan in a PowerPoint demonstration, Brian Kulpa of Clark Patterson Lee, consultants hired by the town to guide the process, said, "I think you have a document that is uniquely Grand Island."
It was the third public meeting on the comprehensive plan and the first draft update presented.
Jim Sharpe, chairman of the town's Long Range Planning Committee, said that over the past 18 months, participation in the comprehensive plan "isn't just a group of people sitting in a room, but it's a group of people that represent all of us."
Kulpa estimated the plan has received 2,400 hours of work from volunteers. Their work product, which will be online for review before the Grand Island Town Board tackles the nuts and bolts of it, is "a plan document that we think is in line with those ideas" of residents, Kulpa said.
Kulpa said the spirit of the comprehensive plan is to look at land use and the way a town allows or doesn't allow development. The plan, Kulpa said, will "frame an expectation for 20 years."
Some highlights of the new plan are an emphasis on trails with mobility and access, which Kulpa called "a big component for us."
Also, whereas the last plan was focused developing the town center, Kulpa said that philosophy deserved reassessment because the town has a drive-up service town center that is "sort of forced," and residents might like more boutique retail. 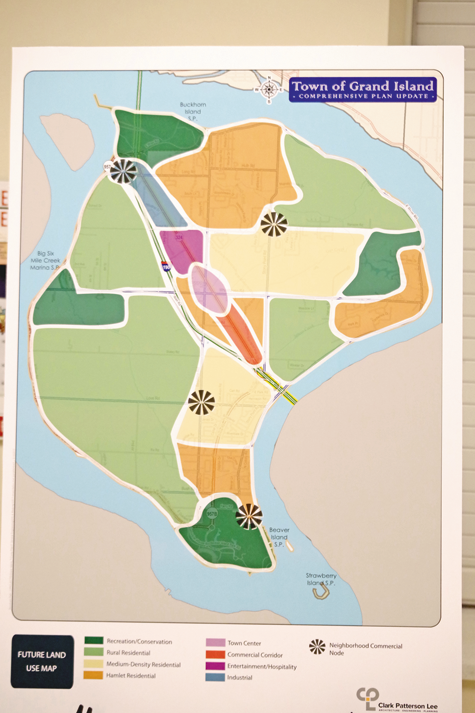