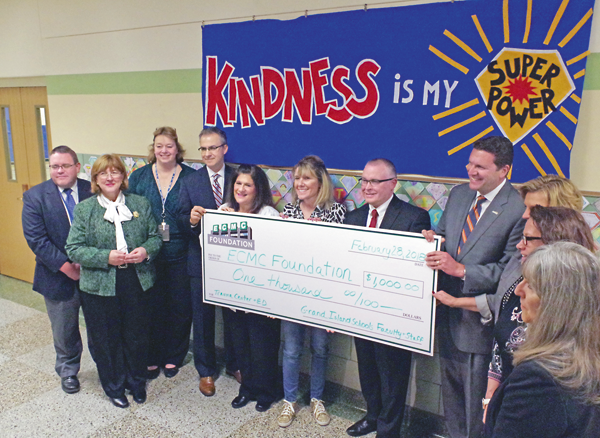 Sat, Mar 3rd 2018 07:00 am
Employees throughout the Grand Island Central School District had a personal connection when they donated to the Erie County Medical Center Trauma Center/Emergency Department Capital Project.
On Wednesday, the district donated $1,000 to ECMC's campaign to build a new level 1 trauma center and emergency department. Funds were raised through dress-down Friday fundraisers. The request for donations was sent districtwide and many employees throughout the district participated with individual donations.
AnnMarie Stewart, a school nurse at Kaegebein Elementary School, headed the fundraiser. Her daughter Amy was the victim of a pedestrian hit-and-run accident in March 2009 that left her with severe traumatic brain injury. Amy is a 2004 graduate of Grand Island High School. After recovering from her accident, she earned her master's degree in education and works as a special education teacher in Syracuse.
"Through the efforts of the skilled doctors and nurses in the emergency department and trauma center at ECMC, Amy not only survived her trauma, but has made a remarkable recovery," said Stewart. Her daughter is expecting her first child this week, Stewart said.
Also on hand for the check presentation at Kaegebein Elementary School was Dana Papaj, a teacher aide from Huth Road Elementary School, who was severely injured in June during a hit-and-run accident while walking her dog. Papaj also received lifesaving emergency and trauma care at ECMC.
"I want to thank everyone at ECMC for all their help," Papaj said. "It's been wonderful. I've come a long way since I've been there. I don't know what else to say but 'Thank you.' They're really wonderful people."
Thomas J. Quatroche Jr., Ph.D., president and CEO of ECMC Corp., and Dr. Michael A. Manka, chief of emergency medicine, ECMC Corp., were among the hospital representatives attending the event at Kaegebein.
"Ann Marie's daughter Amy and also Dana are living examples of what ECMC's all about," Quatroche said.
ECMC will double the size of the existing Trauma Center/Emergency Department, breaking ground this spring with an expected completion in 2019.
"Your continued support of ECMC is helping to ensure that all Western New Yorker's have access to the lifesaving care only a level 1 trauma center can provide. Thank you again for your confidence and support of the work of ECMC and the ECMC Foundation," said Susan M. Gonzalez, ECMC Foundation.
Donations can be made online through www.supportecmctrauma.org or www.ECMC.edu.
Categories
Dispatch Dispatch feature NFP