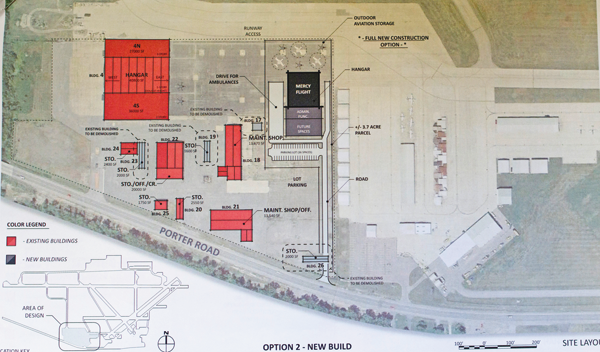 The recommended site plans as presented by LaBella Associates.

Fri, Mar 2nd 2018 06:30 pm
Plan proposes to build state-of-the-art facility at old NF U.S. Army Reserve Base
By David Yarger
Tribune Editor
On Tuesday evening, the Town of Niagara Town Board welcomed LaBella Associates and the Niagara County Center for Economic Development for a special Town Board meeting, in regard to the proposed Western New York First Response and Preparedness Center at the old U.S. Army Reserve Base off of Porter Road.
Daniel Pieters, vice president of LaBella Associates, along with Ben Bidell, senior planner of the NCCED, guided the Town Board, as well as Niagara County Sheriff James Voutour, through a presentation of the Building Conditions Survey of the current site off Porter Road, concept designs and final design selections, estimated values, 3-D graphics, recommendations and also the next steps in the right direction.
Town Supervisor Lee Wallace began the meeting noting the town has worked on the concept for three years and it's evolved significantly from where it started.
The proposed transformation of the site would house Mercy Flight, the Niagara County Emergency Operations Center, the Niagara County Sheriff's Aviation Unit and the Niagara Crime Analysis Center.
The town hired LaBella Associates to study the feasibility of placing the WNYFRPC at the old reserve site and the group identified the conditions of building at the base, needs and requirements, and developed renovation plans that would be best fit. The total space needed to house the four tenants was estimated at 22,160 square feet.
The project has also managed to gather $1.775 million in state grant funding from Sen. Rob Ortt's office. More funding will be required for the project, but Bidell said, "They are comfortable that the funding can be secured from state and federal sources."
In the Building Conditions Survey, Pieters said "What we do is we go through, survey, inspect, review, try to turn things on, turn things off, exercise the equipment as much as we can and make our professional opinion on the remaining useful life of it. ... Then, we put costing to each item on how much it'd be to replace it."
In the review of the old site, architecturally on the outside, all buildings needed new roofs, bricks needed work, lintels were failing and rusted, and all doors and windows were way too old. On the inside, all finishes were "past life expectancy" and there was a possible asbestos issue with buildings 4N and 4S connected to the hangar.
Structurally, there was cracking, and mechanically, the buildings needed new heating and cooling systems, as well as new exhaust and heating distribution systems. Carrying on, plumbing, electric and sewer evaluations all show a need for renovation, mainly in fact to the age of the facility and lack of activity at the base for quite some time.
LaBella, after several concept designs, decided on two final designs; renovating the hangar and 4S and 4N buildings and then new construction.
After reviewing space that the four tenants believed they'd need, LaBella highly recommended the new construction, which would place a brand-new facility on about three acres of vacant land on the site.
Along with it, they recommended the project be done in phases, with the first being space for Mercy Flight, Mercy EMS and the NCSO Aviation Unit. The facility would then be designed to accommodate expansion for the Niagara County Emergency Operations Center and Niagara Crime Analysis Center in phase two.
All phases combined carry an estimated cost of $8,423,665. The initial phase would be an estimated cost of $6,131,427. Pieters said he expected the numbers to go down "once we really hone in on the final drawing phases."
Pieters added, "It really makes sense, as far as our recommendation, to go with this new build. There are a lot of reasons, but cost is really a main driver."
Something Bidell said may need to be worked out is a through-the-fence agreement with the NFTA, so planes could go from the facility and on to the airport property to take off. The agreement is strictly for planes, as helicopters take off vertically and would just need to contact the airport's control tower.
"We met with Bill Vanecek, the director of aviation for the NFTA ... and he told us a private developer is not going to get a through-the-fence agreement, because the FAA requires that any airports that receive federal funding be as financially viable as possible.
"On top of that is the TSA requirements for security. He said it would be more likely as a publicly controlled building, whether the NFTA owns it in some capacity or Mercy Flight, because of its first responder mission and long-standing relationship with NFTA at the Buffalo Niagara International Airport, would have a greater chance at getting a through-the-fence agreement than a private developer would," Bidell said.
Bidell added if the agreement can't be reached, the jets proposed to be housed at the new site would not be able to.
Continuing, the presentation listed more recommendations as to why option two was the best fit. These include good separation from the existing facility, that the new build would have less condition issues, the new build will be one floor and no stairs or elevator would be necessary, and the flexibility of expansion.
If option two were to be decided upon, Pieters said the drawing phase would take around eight months, two months for the bidding phase and 18 months for the construction phase from the time of bidding.
Everyone in the room knew, though, the process is still a long way to go. Late in the meeting, Bidell said they "were probably three years out from construction between the funding, funding agreements, the leases, the solicitation process and so on."
Bidell said he anticipated the next step from LaBella to be a modified proposal from the original proposal.
The meeting was a progress update and no action was taken. The Town Board now has time to look over the options given to them by LaBella.
Categories
NFP Tribune Tribune feature Tribune HP Feature Picture