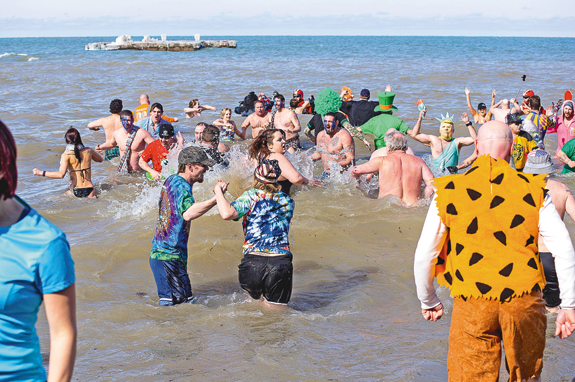 A look back at last year's Polar Bear Swim for Sight.

Sat, Feb 24th 2018 07:00 am
By Terry Duffy
Editor-in-Chief
You had enough of it?
Let's face it, the winter of 2017-18 has had its share of ups and downs. We saw a return of what many rate as a normal one, weather-wise, with average snowfall and temperatures - the kind we knew from years back.
But winter by now has also entered the doldrums of misery. What many may have actually enjoyed earlier on - a very wild Bills-Colts snow bowl game last December; the joys of actually having a white Christmas; some cool outdoor skating in the area; the thrills of boarding or tubing in the southtowns and more - has now become a winter of drag and wear. Over the past month, we've been battered with cold spells, warm-ups, bouts of heavy snow, freezing rain, those rough driving experiences, etc., etc.
February now moves into March, and with it hopefully an early spring. But don't fret; there are also some pretty fun events coming up on the calendar in northern Niagara to look forward to.
One is next Sunday with the Olcott Lions 49th annual Polar Bear Swim for Sight, on the Lake Ontario waters off Krull County Park in Olcott Beach.
County officials report the Lake Ontario beach areas at Olcott have sufficiently recovered for limited use from last year's flooding, and Olcott Lions officials are putting their best foot forward for what they hope to be another banner event this year. Their event is held to benefit numerous area organizations and Lions sight programs.
" 'Swim for Sight' is a fundraiser and community 'fun' day that is WNY's oldest charity swim. At 49 years young, it is where thousands gather in Olcott to watch up to 1,000 happy and zany souls who swim in the frigid water, enjoy tailgating with family and friends, the events vendors, music, restaurants and bars of this beautiful, friendly community that is located on the southern shores of Lake Ontario - all to help those less fortunate," reads a Lions post.
From 10 a.m. to 4 p.m. Sunday, March 4, Olcott Beach will reawaken from winter, with a full slate of outdoor fun, including tailgating, food sales and vendor services on the hamlet's streets, DJ music, an all-new "Official Polar Beer Tent" by Corey McGowan Productions of Grand Island and more, all leading to the mid-afternoon swim.
Area fire companies will join in a tug of war to determine the Polar Bear Championship starting at 10 a.m.; swim registrations - now underway online at https://goo.gl/zLwBCd - will continue throughout the morning and early afternoon; and the always-popular Polar Bear Queen competition, starting at 1:45 p.m. on the beach, will lead to the annual swim that is expected to draw hundreds.
"There are no polar bear swimmers more dedicated than those that head to Olcott Beach to plunge into the icy waters of Lake Ontario to raise money for the blind and visually impaired!" the Lions post read.
For more on this year's Swim for Sight, visit the listed registration link, and check out the Olcott Lions on Facebook, or online at the club's website: www.olcottlions.org.
Down in Niagara Falls, another good one is on the calendar.
Come Friday evening March 9, stop by the Niagara Arts and Cultural Center, 1201 Pine Ave., as "the NACC" puts on its 12th annual Art of Beer. The venue's largest fundraising event runs from 6-9 p.m. Visitors will experience what is perhaps the most elaborate celebration of suds in Niagara. How elaborate? How about 75 tasting stations scattered about the three-plus floors of the NACC, offering visitors a truly wide variety of beer, cider, wine and culinary pairings.
And that's only part of this year's "FUNdraiser" experience, proudly dubbed by the NACC as "WNY's Original Beer Tasting Event."
Vendors on tap for this year's Art of Beer read like a "who's who" among WNY brewing and vintner circles. Included are 12 Gates Brewing Co., 1991 Hard Cider, Big Ditch Brewing, Blackbird Cider, Black Willow Winery, Brickyard Pub & B.B.Q., Buffalo Brewing Co., CB Craft Brewers, Cider Creek, Chateau Buffalo Ciderhouse, Community Beer Works, Consumers Beverages, Ellicottville Brewing, Empire, Flying Bison, Founding Fathers, Four Mile, Hamburg, Leinenkugal, McKenzie's Hard Cider, Mister Goodbar, Niagara Craft Spirits, NY Beer Project, Ommegang, Pearl Street Grill and Brewery, Pan American Grill and Brewery, Resurgence Brewing, Southern Tier, Thin Man, Traveler and Woodcock Brothers.
Complimenting the beer and wine samplings will be culinary tastes from such Niagara-area favorites as Bella Vista, Craft Kitchen and Bar, Dispenza's Meat Market, Hard Rock Cafe, Power City Eatery, Tim Hortons locations in the Falls, Niagara Honeymoon Sweets, Parkway Prime, Rise Up Bakery, the Village Bake Shoppe, the Brickyard Pub and B.B.Q., the Red Coach Inn and Soliday's Bar and Grille.
But wait, there's more. Visitors can view a homebrewing demonstration by Niagara Tradition Home Brew, check out an interesting collection of beer art along with some interesting "live art" in the NACC gallery, and partake in some Art of Beer "fun and games" provided by Niagara Tradition Home Brews, Blackbird Cider, Simon Pure Collectors, Brewed and Bottled Craft Shop of Lewiston, King of the Keg and the Clean Beer Initiative, WNY.
And then there's some pretty varied entertainment on schedule throughout the evening. Included will be performances by WhatheFolk, Bobby Skrzypek and the Pedestrians, PANGEA, Rad Bromance, Billy Draws 2 and a "silent disco" by In Your Ear Events.
Sounds like another pretty good one to check out. Advance tickets are priced at $35 per person and include a signature collectable Art of Beer tasting glass. Free parking is available, as well as overnight accommodation packages at Niagara Falls hotels. There's also a safe and sober taxi service offering.
For more, visit the NACC's Art of Beer Facebook pages, on the web at www.thenacc.org, or call the NACC at 716-282-7530.