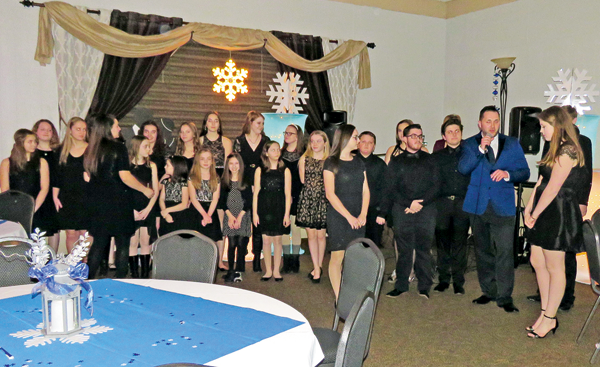 Members of the Matt's Music vocal performance team prepare to sing two songs in front of the crowd at the 2018 Snowflake Ball.

Fri, Feb 23rd 2018 06:00 pm
Proceeds from event donated to Boys and Girls Club
By David Yarger
Tribune Editor
On Saturday, North Tonawanda Mayor Arthur Pappas and his wife, Linda, hosted the eighth annual Snowflake Ball at Gratwick Banquet Hall.
The annual ball collects proceeds and later donates it to a local charity or organization.
For 2018, the charity of choice was the Boys and Girls Club, which the organization currently runs at eight different sites in the Tonawandas including Spruce School, Drake School, North Tonawanda Middle School, the Newman Family Club, Fletcher School, and Tonawanda Middle School.
Pappas continued the tradition set by former NT Mayor and current New York State Sen. Rob Ortt and his wife Meghan. Ortt was unable to attend this year due to a family vacation.
Pappas said to continue the tradition wasn't more about him; it was about the good of the event.
"It's what it means to the different organizations and whom they represent. It provides some extra funding for them, which they're able to take on another project or complete a project. It certainly benefits all the people involved with whatever charity it happens to be and that's our goal; to help the people around us," Pappas said.
Pappas credited his wife for the continuation of the event saying, "We didn't know if at first we were going to continue, because the timing wasn't just right, it was a little late, but we did and my wife said we're going to continue this and if the wife says you're going to continue it, you're going to continue it. ... I have to say, if it wasn't for my wife Linda, probably this wouldn't happen."
The event included a special music presentation from the Matt's Music vocal performance team, a dinner, open bar, dancing, raffles and presentations from Pappas, Robert O'Brocta, CPO of the Boys and Girls Club of the Northtowns; and Paul Schmidt, a longtime member of the club who flew in from Colorado for the event.
O'Brocta thanked everyone for the generous donations that would benefit the club.
Schmidt spoke about his experiences with the club, including winning New York Youth of the Year and how the club changed his life. Pappas called Schmidt's presence "extra special."
"He really feels that kind of saved his life and made him a better person, because he spent an awful lot of time in there. ... It's been so influential in the Tonawandas between our locals here in Tonawanda and the City of North Tonawanda. It's benefitted so many youth that we can't say enough about them," Pappas said.
The turnout for the event was strong, and with attendees knowing where the proceeds were going, Pappas said it reflected well on the area.
"People in our area are very giving people and whether it's a benefit for someone or a telethon of some kind or just these smaller local groups; they turn out and they do give very generously. They're just super about giving to other people," Pappas said. 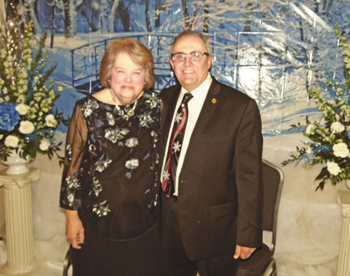