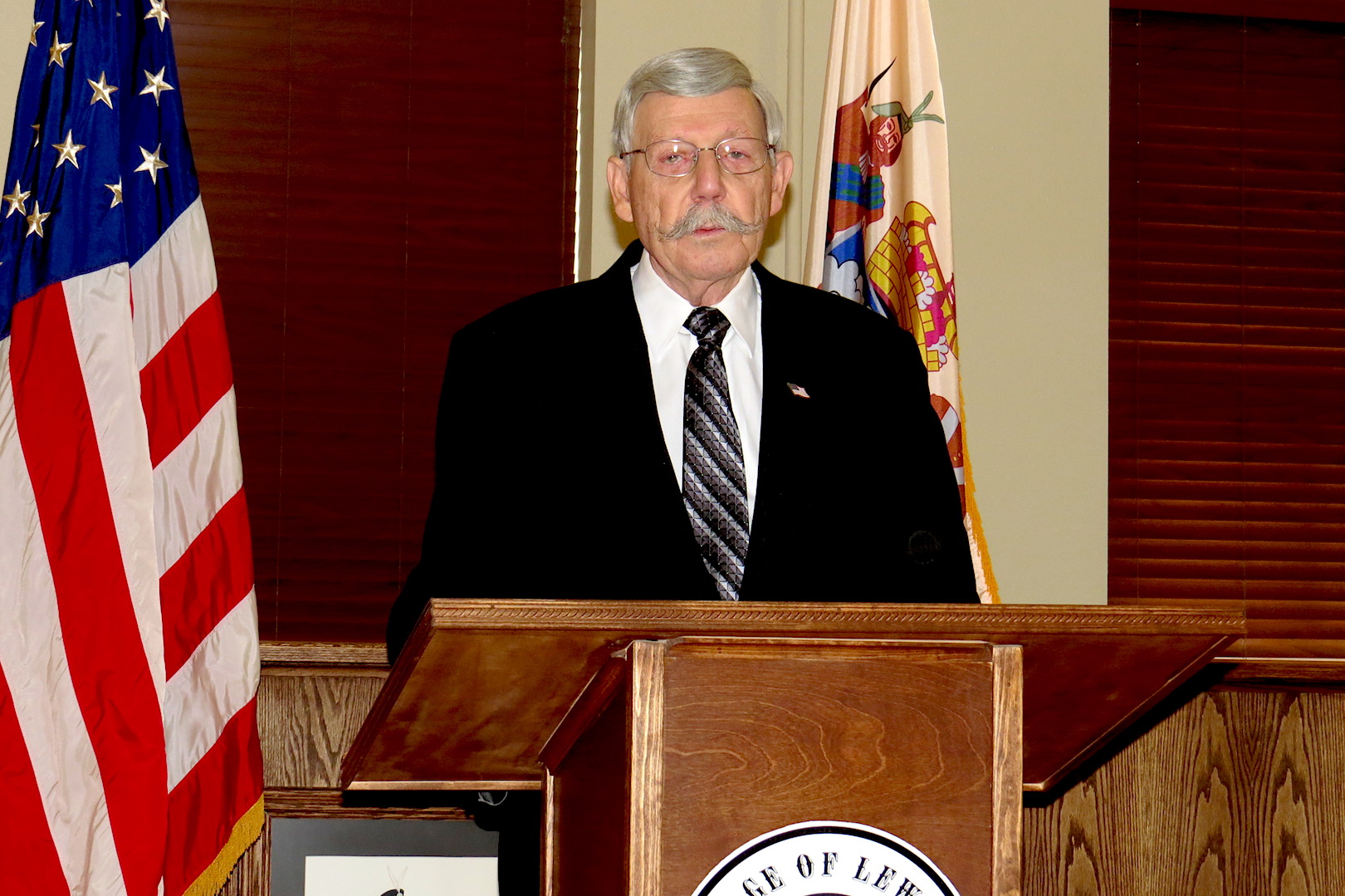 Mayor Terry Collesano address family, friends, co-workers and reporters at a press conference Monday at the Red Brick Municipal Building. He will not seek a third term as mayor, opting to retire from public service after more than 40 years in office.

by jmaloni
Mon, Feb 19th 2018 12:55 pm
By Joshua Maloni
Managing Editor
Village of Lewiston Mayor Terry Collesano held a press conference Monday morning to announce he will not seek a third term as the municipality's chief executive. He was joined in the Morgan Lewis Village Boardroom by family, friends and colleagues.
Collesano said the decision was made after consulting with his wife, Jeanette, and family.
"I think it's time for me to step down," he said. "After 43 years, my term will be completed as of June 30, 2018. That will be my last day on the job."
Collesano said retiring from public office is "bittersweet."
"This is an announcement that I'll be making that I feel a little strange about doing, but, as you know, I have served this Village of Lewiston for many years," he said.
Collesano quipped, "Many of you probably think I'm a permanent fixture, I've been around for so long. It's been 43 years that I've served the Village of Lewiston."
He said two terms "is enough for any mayor in this village," and "change is good. You will all adapt, and I know that you will adapt successfully."
A lifelong resident of the Village of Lewiston, Collesano, 77, has been involved with community clubs, causes and activities for five decades. Since 2000, he has operated the Olde Time Barber Shop on Center Street.
WATCH COLLESANO'S ANNOUNCEMENT:
Collesano was first elected to the Village Board in 1978. In 1994, he was chosen to be deputy mayor. Collesano would serve 12 consecutive years in this position, working under four-term Mayor Richard Soluri. Collesano was elected mayor in 2010 and then re-elected in 2014.
During his term, he had to contend with two major developments (Ellicott Development plaza, Fairchild Place residential reuse); a growing parking problem brought about by the success of Artpark, Niagara River Region Chamber of Commerce, Kiwanis Club and Lewiston Council on the Arts programming (not to mention the growing popularity of village restaurants); and the uncertainty of the village's "crown jewel."
"I think my greatest appreciation is being able to serve, first," Collesano said. "Secondly, I think what we've done with this village, to keep and enhance the beauty of our village, and the promotion of the village, but yet holding on to our heritage and our past, is a very important thing for all of us. That is my greatest accomplishment.
"The thing that I feel very badly about, though, is that we never were able to accomplish anything with the Frontier House. That has been a thorn in my side for the last 10 years. I've worked diligently to try and get something done, but it just hasn't happened.
"Hopefully, with new blood - with new people coming in with new ideas - something can happen. That's what I look forward to."
Collesano said he is "Leaving the most dedicated and loyal employees. I look at them as family, and I love them all so very much."
He said he's departing a "very good team" on the Village Board. Collesano gave credit to the other municipal bodies, as well as the Department of Public Works. He called trustees Bruce Sutherland, Vic Eydt, Nick Conde and Dan Gibson "excellent, excellent gentlemen. ... They've done a world of good for our Village of Lewiston. I have a lot of confidence in all of them."
Sutherland, who has served two terms as Collesano's deputy mayor, said, "We all thank him."
"I really enjoyed him. I learned a lot from him - from his grace and respect for everyone," Sutherland added. "He always said that we can't please everyone, but we can at least listen to them, and then make the best decisions for the community. He did that. I think that he has helped make Lewiston the great place it is, to live and raise a family. And it's become more of a destination during his term than ever before.
"When he retires, we're going to miss his leadership. He will be greatly missed."
No mayoral candidates have come forward. Election Day is Tuesday, June 19. 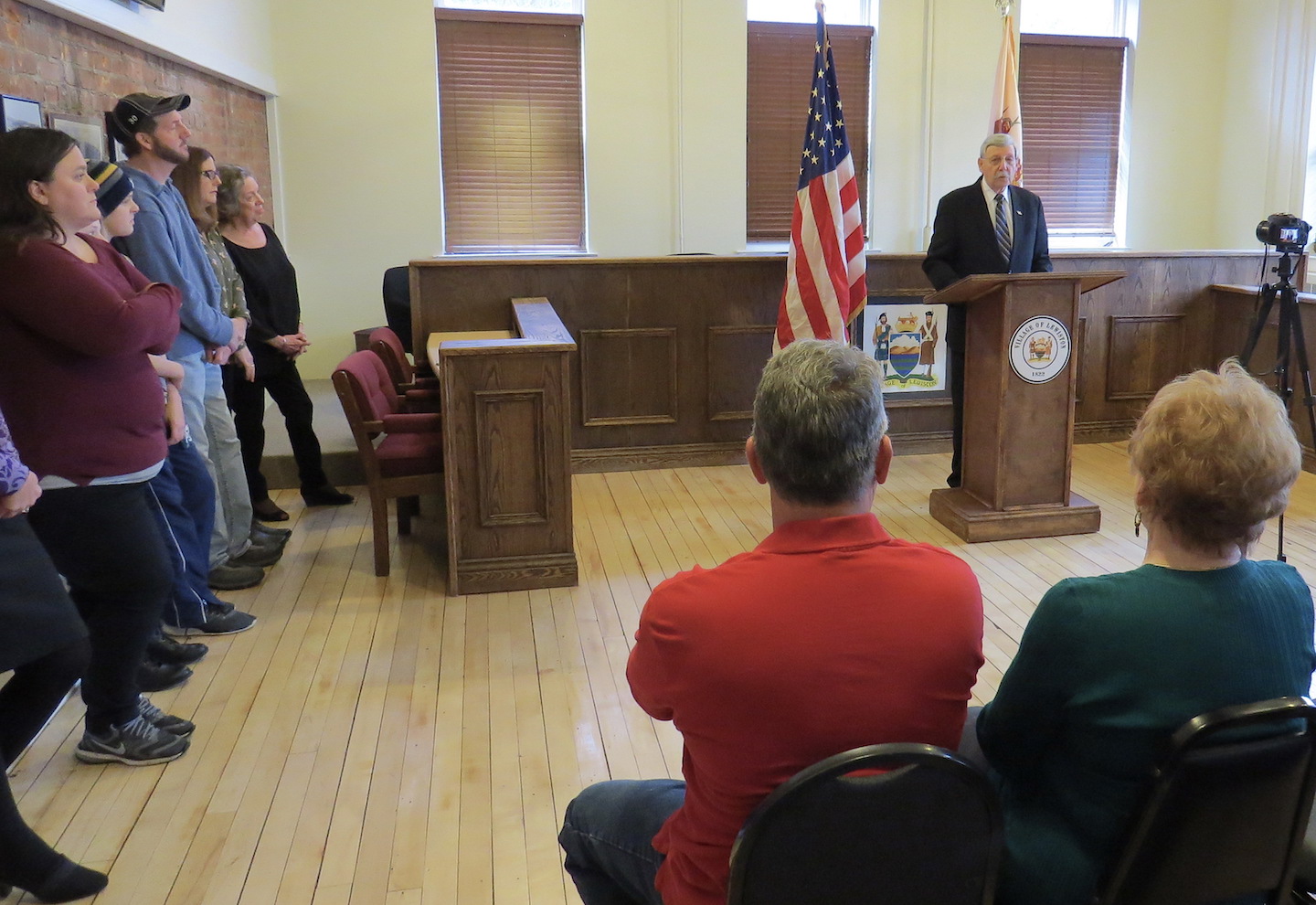 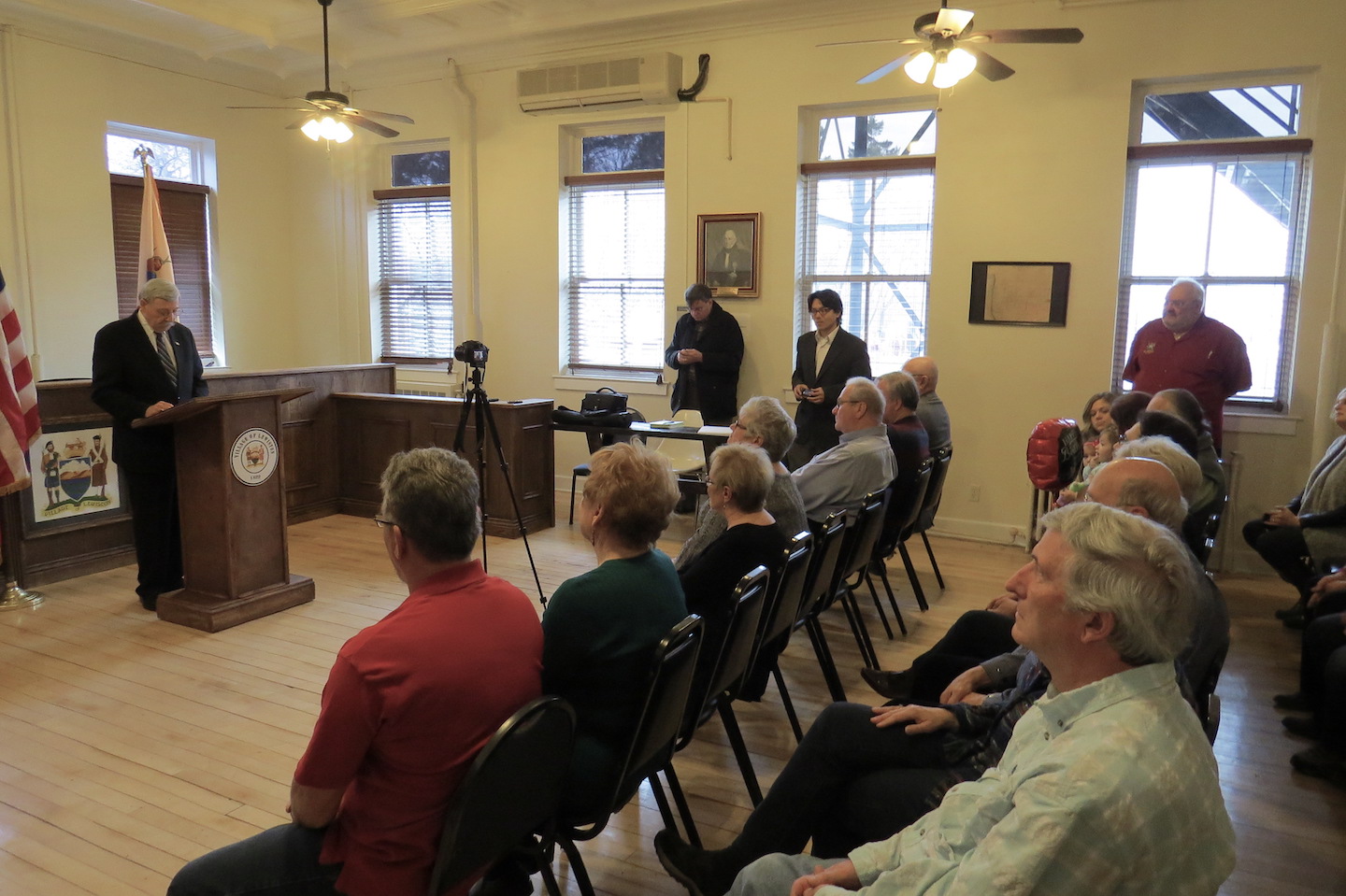 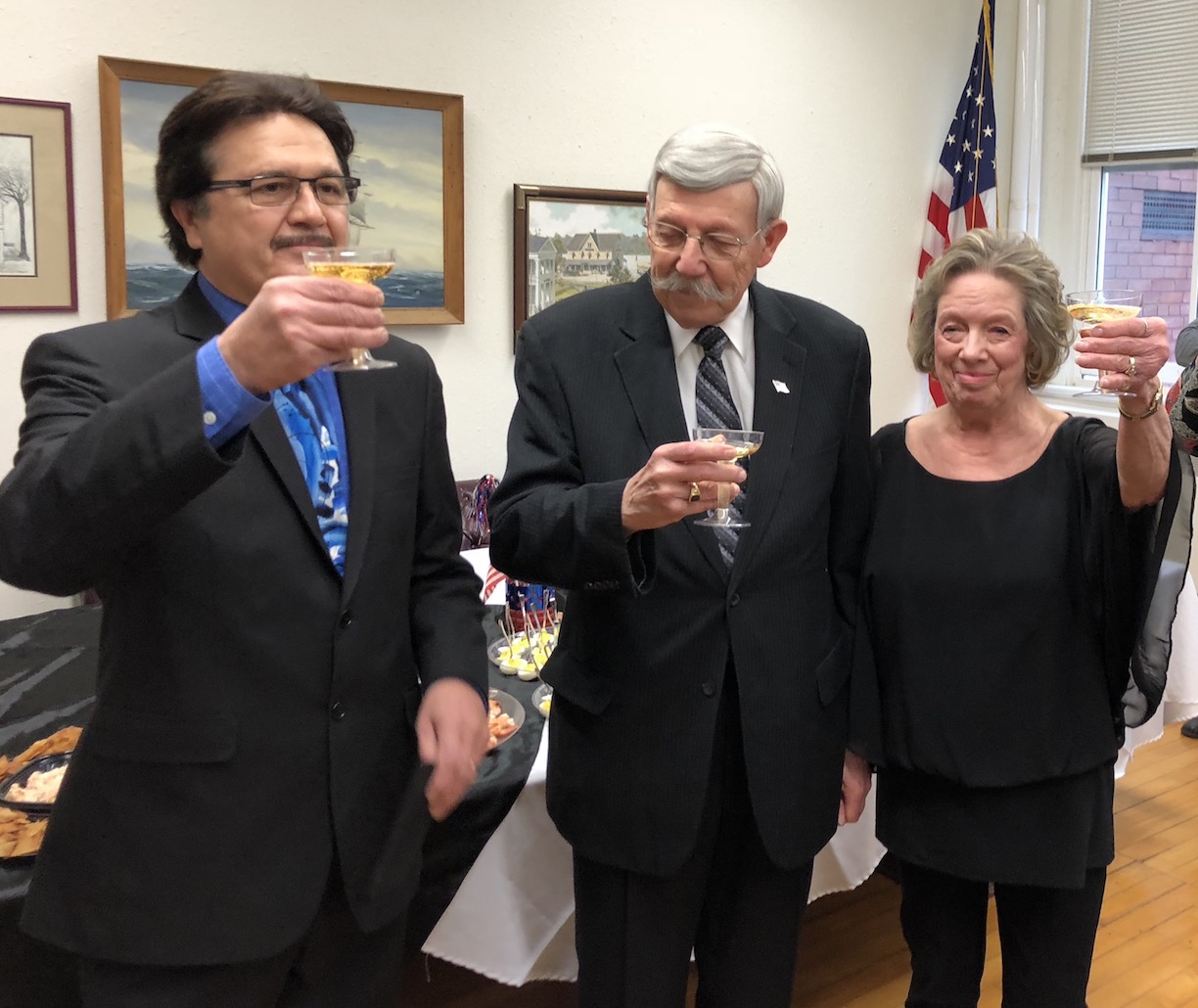 Following the press conference, a reception was held in the mayor's office. Zoning Officer Edward DeVantier led a toast to Collesano. The mayor then shared a kiss with his wife, Jeanette. 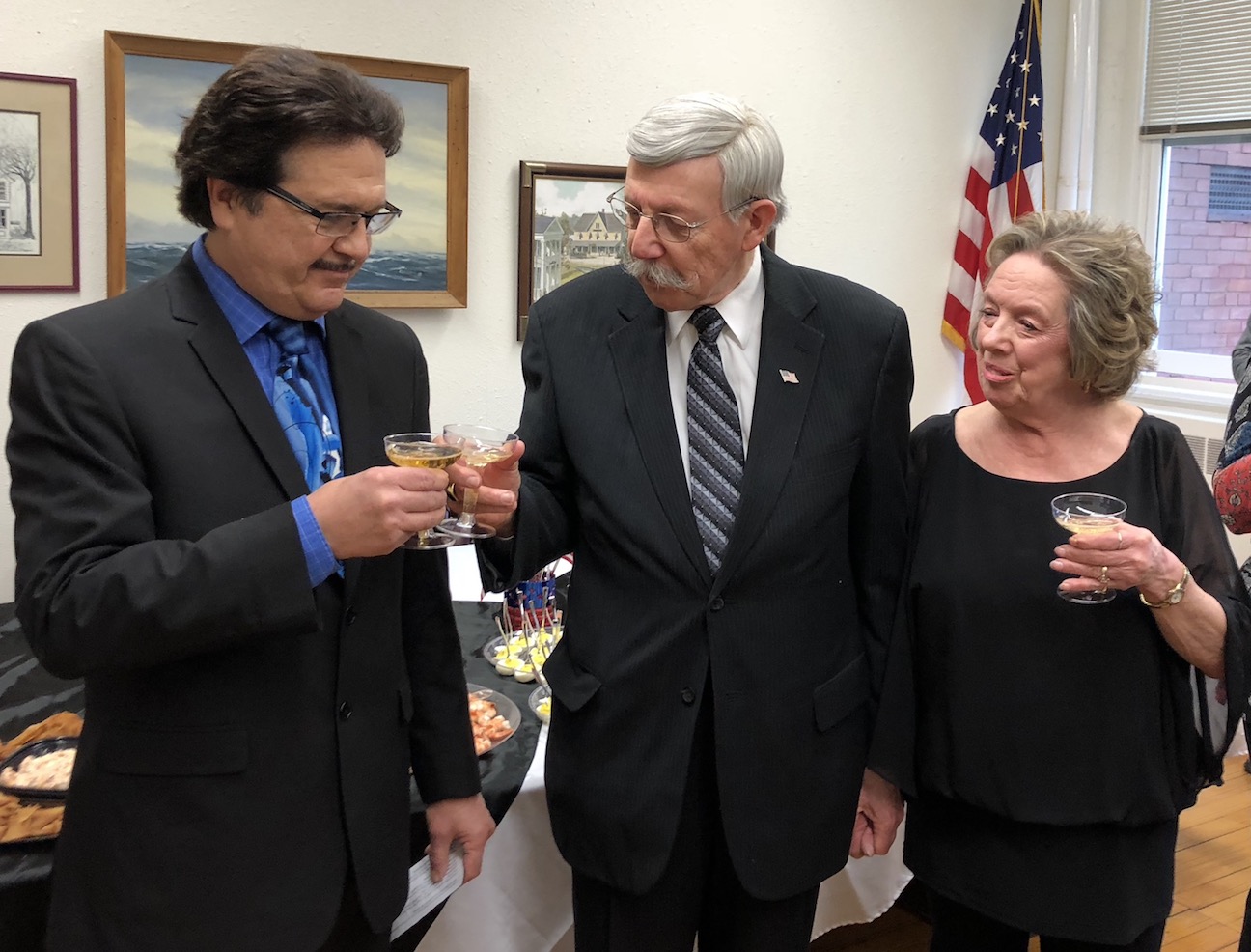 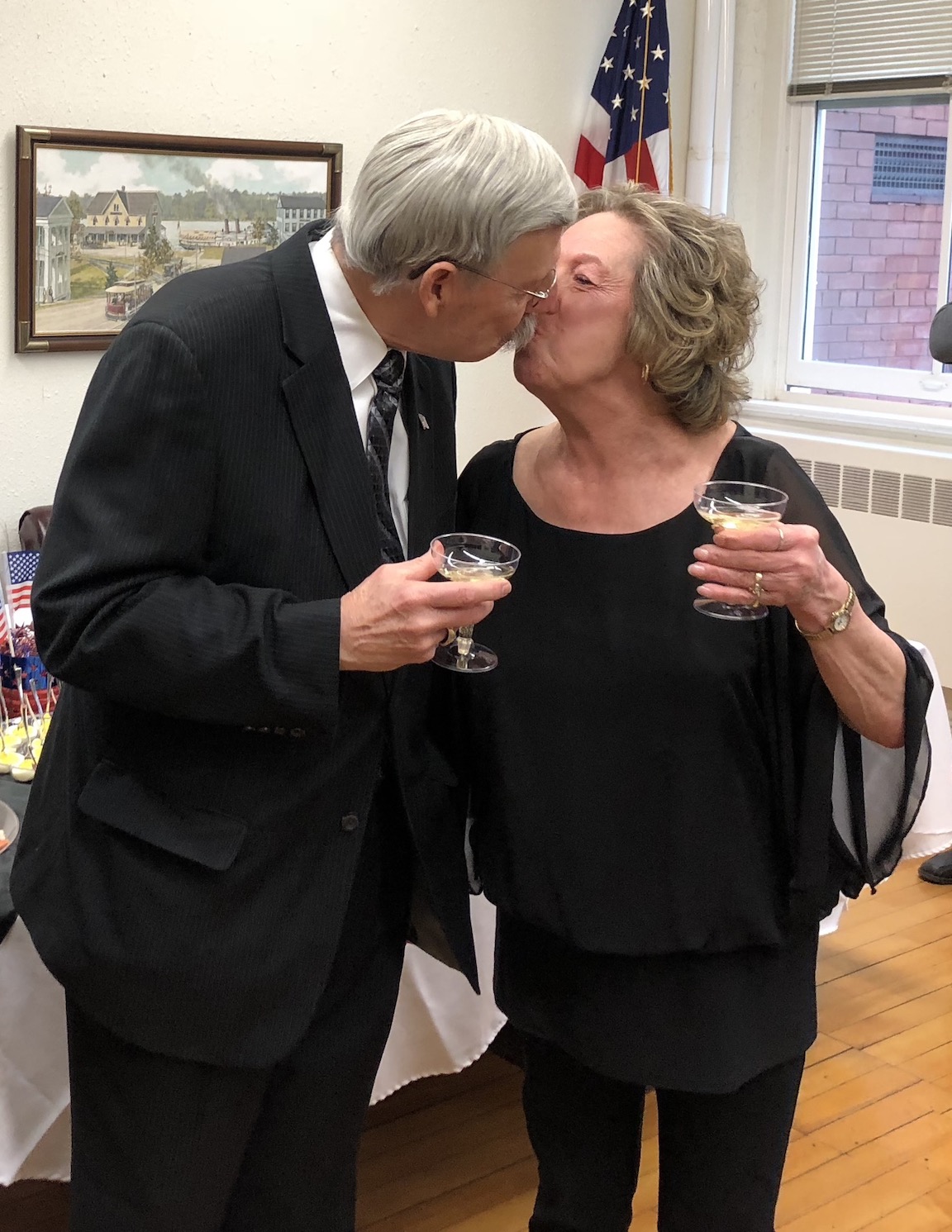 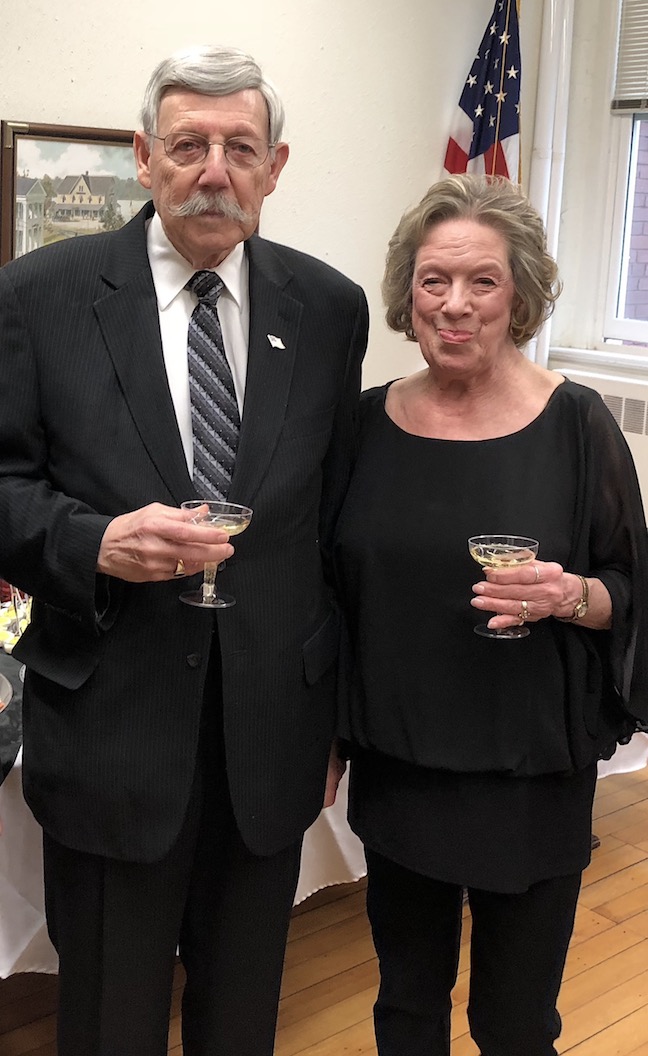