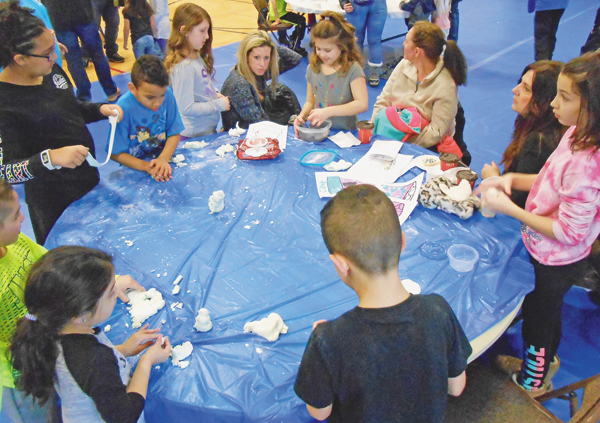 Children were able to create crafts during the Wheatfield Winterfest. (Photo by Justin Higner)

Fri, Feb 16th 2018 06:40 pm
Attendance for winter event at an all time high
By David Yarger
Tribune Editor
Last Saturday, Wheatfield families gathered in the town's Youth Center for the third annual Wheatfield Winterfest.
Attendance was at an all time high, as children and parents were greeted by free hot chocolate and coffee from the Wheatfield Lions Club, outdoor snow activities, an indoor snowball fight, wildlife animal encounters, crafts, a movie, a bounce house, a food truck and more.
Recreation Department Director Mike Ranalli was blown away from the feedback at the event and called it a huge success.
"This one, for me, is right up there. It was tremendous to see people dressed to be outside with their families to enjoy a mild snowy afternoon," Ranalli said.
"The feedback from those that attended was amazing. We've shifted our focus on our parties into the attendees rather than the volunteers and workers. Events like this allow families to come and entertain themselves within the confines of the town's building. Some spent their time outdoors, some grabbed a table to chat with others in the community while their kids reveled in all our activities and others join in the fun at our snowball battle."
The weather was a big difference for this year's event compared to the past two. In year's prior, temperatures had been mild with little to no snow. This year, snow piled up days before the event and temperatures were just right to provide fun outdoor activities to kids and families. 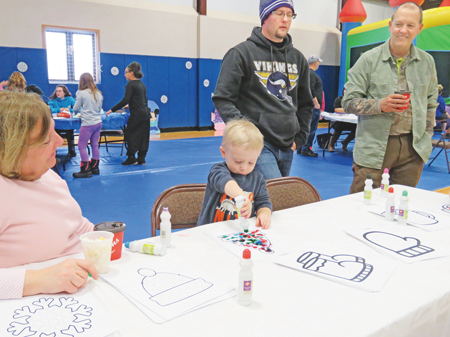 Evan Marshanke, 2, uses a paint dabber to create a crafty winter hat on paper. (Photo by David Yarger)
Ranalli said, "This was the first year we had snow on the ground for this event so it was satisfying for us to incorporate the outdoors."
A big attraction was the indoor snowball fight, which saw plenty of children throwing fake snowballs all over the youth center gym. It was also a personal favorite for Ranalli.
"The indoor snow ball battle was by far my favorite. This evolved into something far greater than I expected. My expectation was for the kids to toss the faux snowballs at each other with enjoyment. What I didn't expect to see was many, many parents out there with their children. They were chasing them around and letting it rip. We ended up having small pods of families having battles with each other. It was fascinating. I'll tell you one thing, some of these kids in Wheatfield have a cannon for an arm," Ranalli said.
In order to put on such an event, it required the hard work and time of volunteers and the Youth Center staff. Ranalli praised everyone that was involved and said the event couldn't have been done without them.
"My staff absolutely rocks. My grounds crew was in early to plow the parking lots and sidewalks so it was safe for our attendees to access our facility. My Youth Center staff put in a ton of work producing the snow globes and other decorations that gave this event a unique characteristic. I'm especially proud of Heather Zeller, Alana Edel and Debbie Reed for their efforts behind the scenes to plan and execute this, and many other programs, within our Youth Center facility," Ranalli said.
As far as a Winterfest for next year, Ranalli said he and his staff believe they've found what works and what doesn't work, so the department plans to stick to the foundation.
Ranalli said the department's next event is the annual Easter party on Saturday, March 24. He said details would be revealed soon. For more information on the Recreation Department, call 716-731-3942. 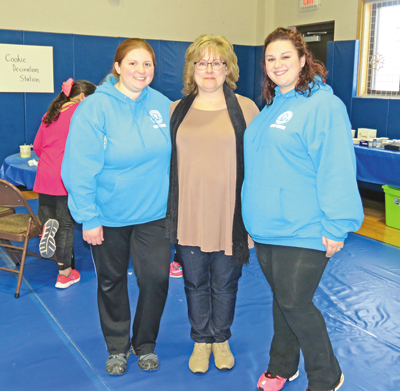