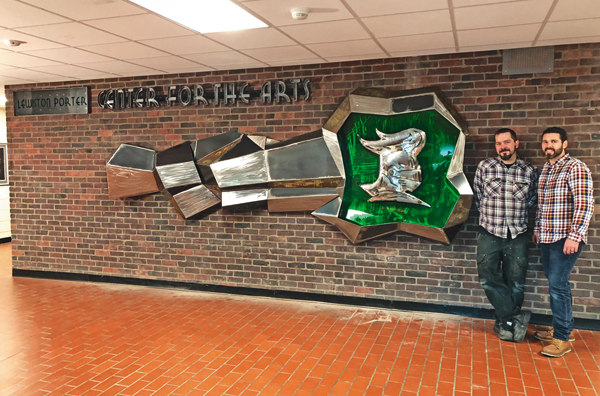 Dan Buttery (left) and Michael Hibbard stand next to the artwork they created at Lewiston-Porter High School.

by jmaloni
Sat, Feb 3rd 2018 07:00 am
By Joshua Maloni
Managing Editor
Millions of dollars and years of planning went into the recent capital campaign that touched every part of the Lewiston-Porter Central School District campus. Improvements were made to classrooms, the gym, the pool, the music rooms and technology in general - even a new fitness center was built.
Still, one thing was missing. The hallways behind the new atrium were left bare.
"With the renovation, the capital improvement project that happened with the school, the art rooms, the whole fine arts wing got significant renovations, and this beautiful atrium was added on," said art teacher Brett Coppins, Class of 1992. "Once that happened, it got us to thinking about how can we bring it to the next level. We really wanted to rename this section of the school the 'Center for the Arts.' "
He and fellow art teacher Cindy Sanchez, '91, began to think about how they could tie together the renovations with the artistic prowess of past and present students.
"We started to have some conversations about a metal sign and 'Is there a guy in Lewiston we can get to?' And that led us to Michael Hibbard (Class of 2001) and Dan Buttery (Class of 1998), and the work that was happening at Gallo, and all around town with the beautiful metal work that Dan does.
"Out of that came some conversations with students, a visit with these guys to the school, and the concept for the sign was launched."
Three metal structures were installed in the hallway. The overall centerpiece is a grand, green "Lancer" head - the school's logo.
"Dan and I worked on the project together, and we had some sketches; and that's what we presented to Brett and Cindy and some of the students," Hibbard said. "And they helped us with some colors and some collaboration. We collectively put this together.
"It's all steel: stainless, hot-rolled, cold-rolled, and then the Lancer head is really the focal point of the whole piece."
Coppins said, "We're really fortunate to have a lot of district and administrative support behind it. They jumped right on board with the idea." 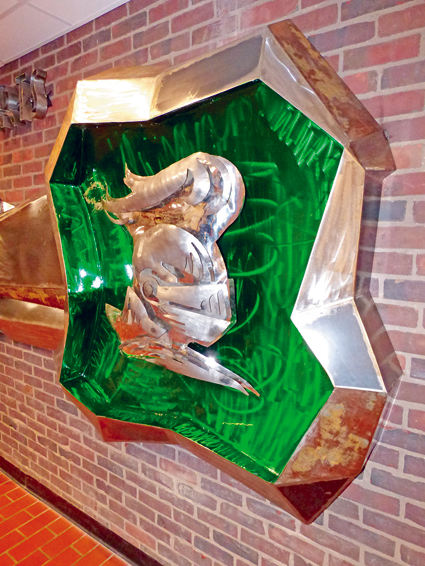 As Hibbard and Buttery have full-time jobs and other commitments, it took about a year-and-a-half for a half-dozen metal sheets to be transformed into the final work. The two artists crafted the metal pieces in Buttery's studio and then mounted them on the hallway wall on a weekend when the school would be empty.
"We installed the actual (Lewiston-Porter) letters and the signage up top first, and that was there for a while," Hibbard said. "That was one phase, and this was the second phase."
Students "were blown away" by the final product, Coppins said.
"We made a point to bring our classes down here and check it out," he said. "I think it just adds to the renewed sense of pride they've brought into the school district, just from all the renovations, to see things be new. And this atrium is spectacular as it is. I think it instills a renewed sense of pride in the students."
Hibbard explained, "The thing that we really have kind of, amongst us, have talked about with administration is taking this piece and actually turning it into a whole gallery space, where people can come in - the public can come in - and see work from Lewiston-Porter alumni, us, Brett, Cindy, present-day students, and really have that a focal point here. Because I feel like that's what we need in Lewiston, and this was a great outlet for it."
Coppins said, "This is really just the first step. We've got visions of (creating) a permanent gallery space upstairs behind the auditorium, and some other signage and branding and things that are going to happen that we've got kind of in the works." 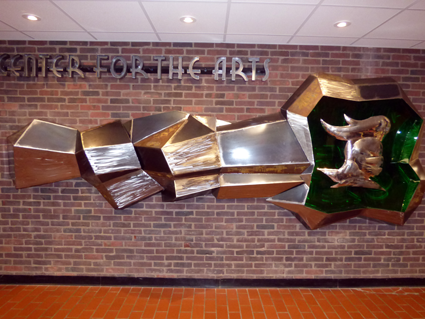 Sanchez noted, "We really have been waiting to almost develop this gallery space phase until this was complete, so that we could really get some inspiration from this, now, and then bring it to that space. We do plan on continuing this metal work to direct us."
Hibbard said, "I think, too, what our conversations are, is that there wasn't really anything for students to look at, and see us, and Brett and Cindy, their work that is showcased, that they can move on and actually make a career out of being an artist or a musician. I feel like that's really what we're trying to work towards with the space upstairs."
All four agreed Lew-Port could be become a community hub for art - a place where students can be inspired to create, and the public can walk around and appreciate the younger crowd's efforts.
"(We have) a lot of very talented alumni and very, very, now influential alumni, in the areas of the arts," Sanchez said. "Parents need to see it, even too. It's a fruitful profession. We've got a lot of really special people in really great jobs that they love. Not many people can say that. It's very evident in the work that they're doing. They're passionate about it. It's definitely something to be proud of. We're very proud of it."
She explained that, in recent years, when she would run into former students, they would ask, " 'What's going on there?' (She would reply,) 'Oh, it's the same. Come back. Nothing's changed.' Now it's changing, and it's kind of exciting to see these changes. When I see kids now, it's like, 'You've got to stop back. It's amazing! You'd be lost, because it's a whole different setup.'
"One thing we did think, though, is our rooms are stunning. The atrium is stunning. And then you walked into this space, and it really didn't - it was absent of change. They really didn't hit the renovation in this area. So, that was our idea, to kind of get this up and running. And then the upstairs is just a long, beautiful, white hallway that's just ... a blank canvas right now. And we've got a whole lot of ideas - we've got a whole lot of alumni, and community members, that are really passionate about getting involved; passionate about doing things."
Buttery said, "When people see living forms like this, of the artwork, then it kind of gets the ball rolling. ... When you don't see anything, then people are just like, 'Eh, OK.' Move on to the next thing. But now, with stuff like this, and stuff that's going into the art gallery, people are going to be able to see that. And it's going to kind of give them different ideas.
"It's like, when you watch a TV program, or you read a book or look something up online, something triggers you - 'Let's see if I can make that.' When people see this, now it's going to give them the inspiration. 'Oh, well, we should invest in this.' Or 'We should try to do something different.' It sparks something in somebody's brain that they can do something else."
Sanchez said, "I feel like it's going to keep growing. I feel like there's momentum behind it that is exciting for all of us." 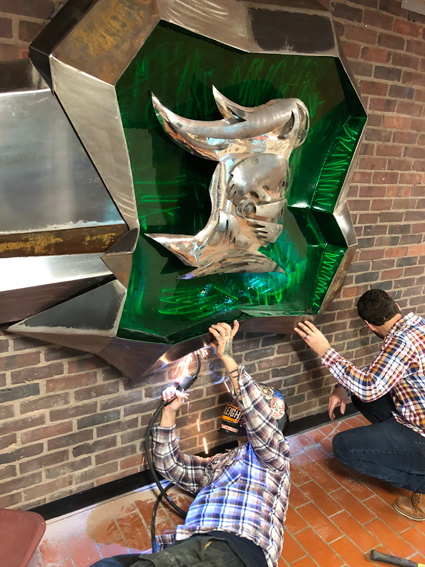 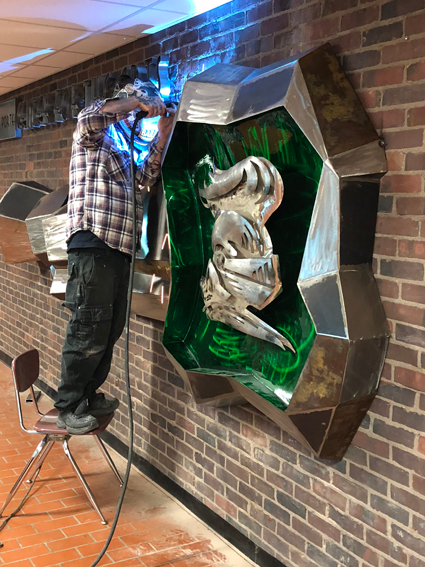 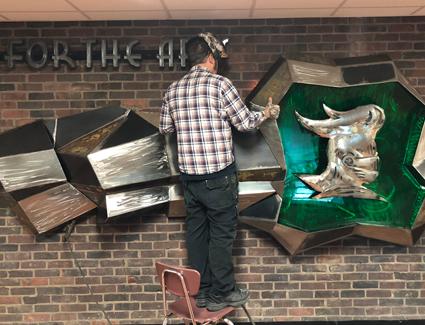 Michael Hibbard and Dan Buttery work to install their artwork. 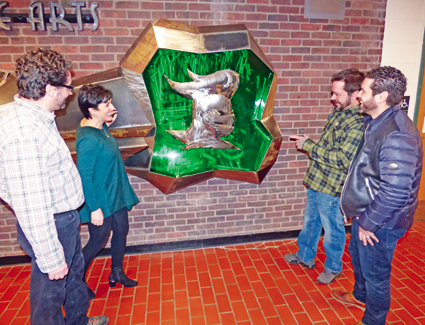 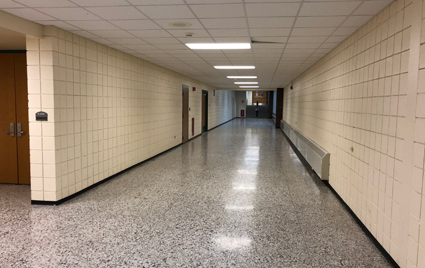 Next up: A blank white canvas (aka the second-floor hallway).
(Photos by Cyndy Sanchez and Joshua Maloni)