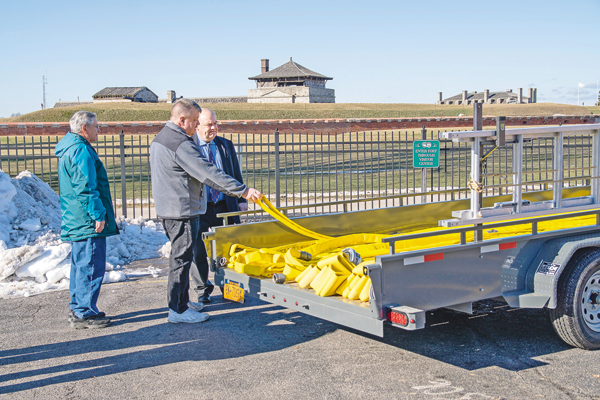 Sat, Jan 27th 2018 07:00 am
Fire vehicle allows for improved emergency response
Staff Reports
Representatives from the Old Fort Niagara Association, Youngstown Volunteer Fire Department, New York State Assembly, New York State Office of Parks, Recreation and Historic Preservation, and the Niagara County Legislature dedicated a new fire trailer at Old Fort Niagara on Thursday. Officials gathered in the parking lot near the fort's Visitor Center to announce the completion of the project, which has been underway for several years.
YVFD members and Niagara County Legislator Clyde Burmaster have been working with OFN to address a firefighting accessibility problem at the historic site that is due to narrow entryways through the fort walls.
"Back in the early '90s, the (French) Castle roof caught on fire, raising questions about the accessibility for the fire department in combatting fires inside the fort," an OFN official stated. OFN and YVFD have been addressing the matter for the past 10 years.
Their solution unveiled Thursday is a custom-built trailer, equipped with more than 1,000 feet of hoses, a dry hydrant, generator, nozzles, lights, tools and ladders, which can be pulled through the fort's narrow gateway by a pickup truck. The setup allows firefighting personnel to access the fort in an emergency in a way that could not be done before.
"Old Fort Niagara's 19th-century gates were designed when horses and wagons were the primary mode of transportation," said Robert Emerson, executive director of the Old Fort Niagara Association. "Today, these narrow gateways prevent modern fire trucks from getting into the fort, which could be disastrous in a fire for certain buildings, like the 1726 French Castle. The new trailer has been designed to fit through these tighter spots, which means that our local fire department can respond effectively in an emergency."
Funding for the trailer was provided by a special grant through the Assembly, announced by Assemblyman Mike Norris, and administered by State Parks.
"I am very proud to represent Old Fort Niagara, which is an historic treasure not only here in our community, but nationally, as well," Norris said during the dedication. "It is an honor for me to be present for the unveiling of the new fire trailer equipment that will protect and insure a valuable state asset, and was purchased with grant funding from the New York State Assembly. Thank you to the Youngstown Volunteer Fire Co. for all of the efforts in the design and production of this equipment and continuing to keep our community safe."
Burmaster added, "It is a pleasure to support the efforts of the Old Fort Niagara Association in its quest to honor the sacrifices of the men who served here in the formation of this great country. The Niagara County Legislature has always helped where it can and is committed to support in the future."
Emerson said, "This trailer addresses a concern that we've shared with our local fire department for some time. We are grateful for the collaboration that happened by everyone here in finding a solution and for the funding from the New York State Assembly. The completion of this project helps ensure that the priceless 18th-century buildings inside the fort are better protected from the threat of fire."
For more information, visit www.oldfortniagara.org. 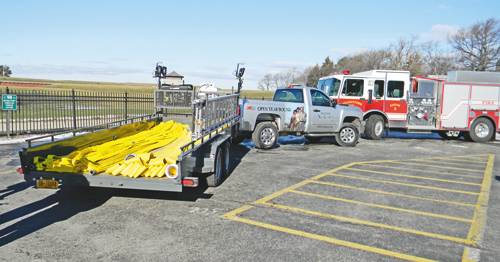 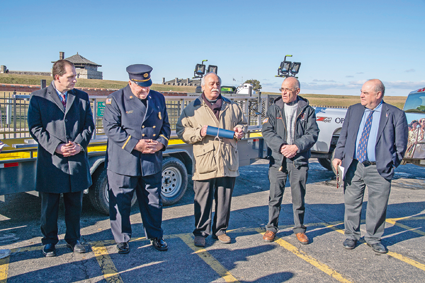