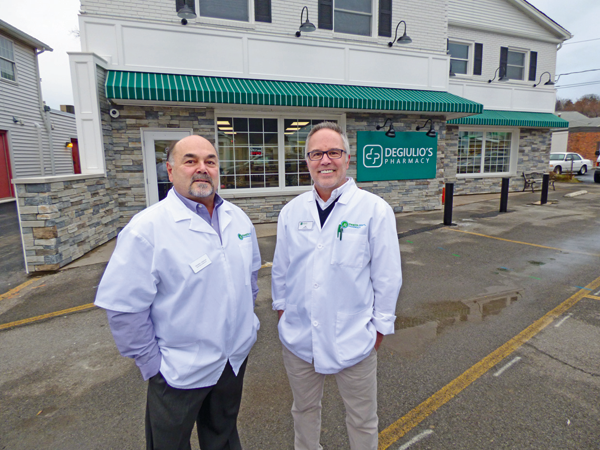 Richard and James DeGiulio at DeGiulio's Pharmacy on Portage Road in the Village of Lewiston.

by jmaloni
Sat, Jan 13th 2018 09:00 am
By Joshua Maloni
Managing Editor
Bouncing from one chain to another in search of a hard-to-find multivitamin or supplement is the norm for this writer and, in all likelihood, many of the people reading this article. If only the box stores would stock more than three cranberry chews or put a handful of gummy completes on the shelves every month instead of every quarter.
It's just not going to happen.
National retailers deal with national suppliers and, when placing orders, aren't thinking about what one or two or 10 customers might need.
That's not the case at DeGiulio's Pharmacy in Lewiston.
The locally owned business, which opened Jan. 2, has, by all accounts, been a hit with customers partly for its products - on shelves or ready to be acquired.
In fact, within the first five minutes of speaking with brothers and pharmacists Richard and James DeGiulio, you'll probably be asked what you need and what it costs elsewhere (you know, assuming you've actually found "X"). Then, you - yes, you - can have that item ordered and delivered to the store for purchase.
Hard to believe, but it's true.
"Let us know; we can order it," Rick said upon inviting this journalist to walk the aisles and scan for products. "And we ask you to compare the prices. I'm sure you'll be pleasantly surprised."
A quick survey of the inventory did reveal prices at or below those found at chain pharmacies.
"The misconception is that the independent pharmacy - or independent anything, whether it's a hardware store or a pharmacy - is that your prices are higher," Jim explained.
At DeGiulio's, "We don't make a big margin on it," Jim said.
Prescription prices are state-mandated and driven by insurance companies. One's Rx doesn't vary from pharmacy to pharmacy - whether it's a super chain or mom-and-pop operation.
Over-the-counter product prices, on the other hand, can be set per store. DeGiulio's uses Health Mart Pharmacy (generic OTC) and Nature's Truth (vitamins).
"We do the competitive pricing," Jim said. "The chains, they have all these layers of management that they have to pay for, and warehouses, and all this stuff. They need to make that markup on a lot of that stuff."
The quantity and pricing at DeGiulio's is not at the expense of quality. The brothers have more than 35 years in the pharmacy business. From an early age, they worked with their father, Joe, at his pharmacy: Barnums in Youngstown. Since then, they've operated pharmacies of their own and for larger companies.
"Our thing is, you're going to pay the $5 (co-pay here, for example), but you're going to get service," Rick said. "You're not going to stand in line for a half-hour and ..."
"Come back three times," Jim added.
"Our whole focus is on customer service," Rick said. "That's what we've done our whole careers."
Part of that service is a willingness to call a new customer's doctor(s) and arrange to have prescriptions sent to DeGiulio's. Of course, patrons also can make their own arrangements.

Brothers Richard (left) and James DeGiulio of DeGiulio's Pharmacy look over their inventory.
In addition to traditional pharmacy products, DeGiulio's offers a wide variety of items in the store's front section. This includes skincare, beauty and wellness products, essential oils and healthy snacks.
"The cosmetic lines and most of our skincare lines are all-natural," Jim said.
Brands include bareMinerals, Mineral Fusion, Deep Steep and Sukin.
Philosophy (not all-natural) will soon join the roster.
"The peanuts over there are all-natural ... there's none of the preservatives," Jim said. "And they're special peanuts. They're large."
"They're Virginia peanuts," Rick noted. "You've got to taste them."
"They're really good!" Jim said.
In addition to the Feridies peanuts, DeGiulio's offers Griff's Pecan Toffee and Griff's Coffee Toffee - both gluten-free - and Matcha green tea.
The brothers said these goods are popular but, like the vitamins and supplements, hard to find in other pharmacies.
Future in-store items are "going to be based on customer response, customer request," Rick said.
Lewiston had been on the minds of Rick and Jim, as they sought to open an independent store of their own.
"A lot of thought and prayer when into it," Rick said. "We took the leap of faith and, basically, it was us wanting to get out of the corporate umbrella. We had the opportunity to do it."
"The population is here, plus we are able to come here, where there is a need for an independent - and still be able to take care of the (customers from the Youngstown and Ransomville areas)," Jim said.
On Portage Road, the brothers combined a former salon space and a vacant dance studio into one cohesive unit.
Rick's son-in-law, Michael LaDuca, who is a well-known artist, designer and marketing agent, said, "They did a complete gut on the inside and a full facelift on the outside. It is now a beautiful building, inside and out, that fits the character of the Village of Lewiston wonderfully."
The store is spacious and open, with seating areas and a television. Village leaders oftentimes complimented its exterior design as the brothers went through the various boards to obtain sign permits.
Village of Lewiston Deputy Mayor Bruce Sutherland said, "Beautiful pharmacy; clean and well run. You get a wonderful, hometown, friendly feeling when you step inside. People are going to love going there." 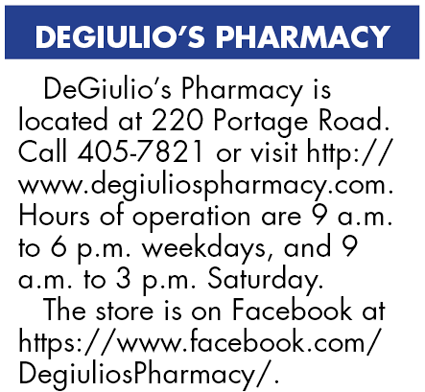