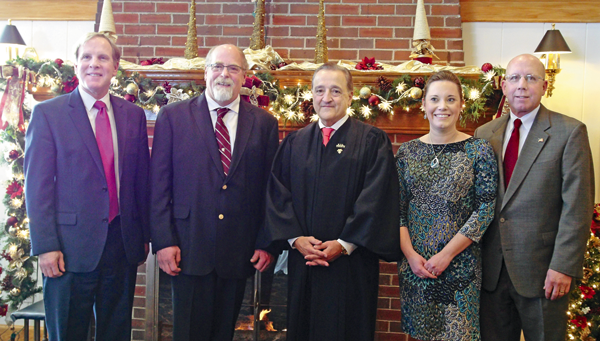 Sat, Jan 6th 2018 07:00 am
By Alice E. Gerard
On a cold New Year's Day, four newly elected town officials, their families, friends and other interested Island residents were at the Buffalo Launch Club, waiting for the inauguration of four newly elected town officials to begin. Only one person was missing when the clock struck noon: New York State Supreme Court Justice Russell Buscaglia.
"Everyone is here, except for the judge," said Master of Ceremonies Mike Rayhill, who elected to begin the program without the judge. Town Justice Mark Frentzel agreed to stand in for Buscaglia, and he swore in Town Councilwoman Jennifer Baney. At that moment, Buscaglia arrived and explained that he went to Town Hall for the ceremony. He said that he waited in the parking lot and, when he saw no one, he decided to head over to the Buffalo Launch Club to see if the ceremony was being held there. Shortly after Buscaglia arrived, he swore in Frentzel for his fourth term as town justice, as well as Town Highway Superintendent Richard Crawford Jr. and Town Councilman Pete Marston Jr.
After the ceremony, the candidates were asked about their hopes for the next four years. Frentzel, who has served for more than 30 years as an attorney, as well as 12 years as town justice, said, "I just want to continue representing people in a fair and impartial manner." Crawford said, "My goal is to continue programs that were instituted by my predecessor (JT Tomkins). We will continue to look at new technology in the treatment of road pavement and storm sewer drainage."
Baney said that she wanted to "cooperate and collaborate for the good of the Island." She expressed gratitude to town employees, "who were helpful in assisting me and wanting me to succeed."
Marston said that he wants to "work forward for the good of Grand Island. I am interested in trails because of my snowmobiling." He said that, as chairman of the town's Planning Board, he saw zoning issues that he considered to be questionable. "I want to work to clean these things up." He added that he also hopes that the Town Board will create a health and welfare advisory board to deal with public health issues on Grand Island. 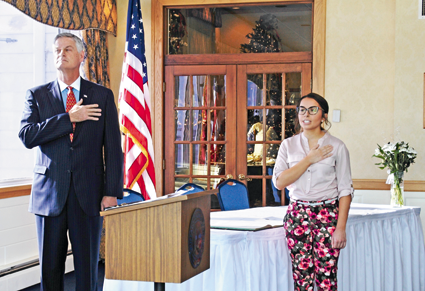 Master of Ceremonies Michael Rayhill stands with Natalie Baldassare, as she sings "The Star Spangled Banner" before the start of the swearing-in ceremony Jan. 1 at the Buffalo Launch Club. 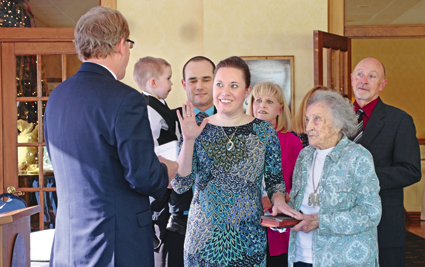 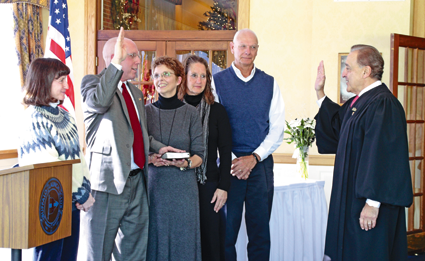