Fri, Jan 5th 2018 03:10 pm
Wheatfield business compiles bikes & toys for local veteran families for 8th year
By David Yarger
Tribune Editor
For years, Terry Vosburgh, CEO of Voz Cycle City, has been giving back to the local community with toy funds that help children and families have an enjoyable holiday season. In 2017, Vosburgh, with the help of local organizations and businesses, raised over $10,000 that went to purchasing toys and bicycles for local families with veterans through WNY Heroes.
Vosburgh said it was his eighth year working with WNY Heroes and donations and support for the fund from surrounding businesses has gone nothing but up. Vosburgh, who is also on the board of directors with WNY Heroes, said he always wanted to give back in someway, and the toy fund was just it.
"I did toy drives before, but then I started looking around and I saw Chris Kreiger (president/CEO) of WNY Heroes, and I talked to my wife and talked to Chris and Chris said yes. I always wanted to do something for the community and start giving back. ... And with WNY Heroes, I'm very proud to be a part of it, " Vosburgh said.
Vosburgh praised the work of WNY Heroes, saying it's an awesome organization and it's cool to see what's going on and where the money and toys go.
The toy fund may sound like something that starts as winter arrives, but Vosburgh put that thought to bed, saying work on the fund starts early in the summer.
"I run cruise nights every second Thursday in the summer and all the proceeds from that go towards the fund. So, work begins in May, pretty much," he said.
Voz Cycle City's Thursday Thunder Cruise Night's occur on the second Thursday of the months of May to September.
Vosburgh noted Voz Cycle City's Christmas party, which racked in almost $2,000 worth of proceeds towards the fund via basket and 50/50 raffles.
Vosburgh also gave credit to businesses that have donated to the fund. He said the Third Warders Club sold 100 raffle tickets, equating to $500, and donated around $1,000 worth of bicycles. The Wheatfield Business Association and Niagara Rotary participated as well, buying tickets and each member brought a toy to the Christmas party.
Vosburgh also credited Amton Car & Truck and KIPO Chevrolet for allowing people to drop off donations at their sites, as well as selling raffle tickets back in the early fall. Also, Vosburgh praised Stolting Machine and Grandma D's Pizza for the efforts they put forth for the fund.
On the support, Vosburgh said, "We're very fortunate for their help. It just makes the toy drive that much bigger."
In the end, Vosburgh said two trailers and a van were packed full of toys and 89 bicycles were delivered to WNY Heroes to be distributed to local veteran families, making it a special holiday season for many. 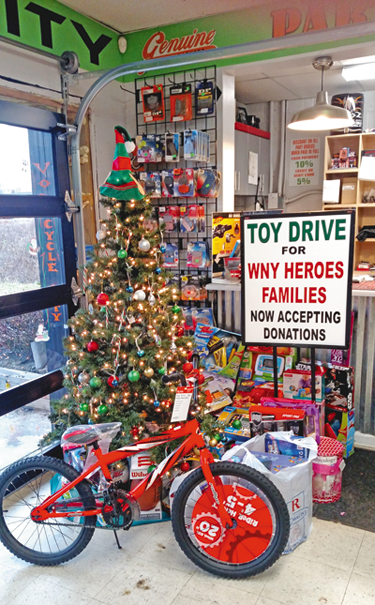