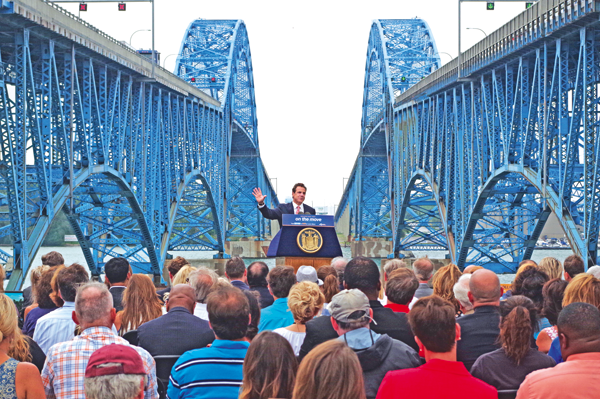 Gov. Andrew Cuomo announces a new cashless tolling system for the Grand Island bridges in August. It was the first visit to the Island by a New York governor since 1962.

Sat, Dec 30th 2017 07:00 am
By Karen Carr Keefe
Contributor
The year 2017 has been one of growth and growing pains for Grand Island.
From cashless tollbooths at the bridges in 2018, to a West River recreation trail, to a new community center, to a state Welcome Center here, Islanders are engaging in a lively discussion of the pros and cons of new developments, hoping their hometown comes out a winner.
In other top news stories this year, Grand Islanders came through big time in a drive to fund a room at the new John R. Oishei Children's Hospital, and the GOP won the November elections in a clean sweep. Here is a roundup of some of the significant news stories of the past year that have people talking. 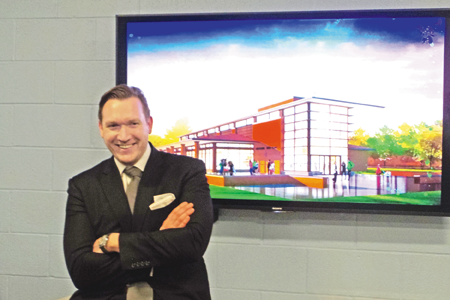 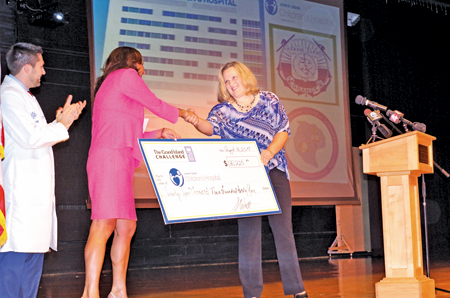 Dr. Stacey Watt, right, presents a check for $25,225 to Amy Habib-Rittling, chair of the John R. Oishei Children's Hospital Capital Campaign to fund a Grand Island room at the new hospital. (Photo by Larry Austin)
The GI Challenge triumphs
Dr. Stacey Watt, a lifelong Island resident and Kaleida Health's chief of service for anesthesia, challenged Grand Islanders to raise $25,000 to fund establishment of a room of care at the new John R. Oishei Children's Hospital in the Buffalo Niagara Medical Campus, which opened in November.
A cross-section of the community came together and met that challenge on Aug. 31, celebrating the effort put forth by schools, government, businesses, civic groups and the medical community.
Grand Island was the first community in Western New York to accept and succeed with the challenge. Watt said that in meeting that challenge, the community showed "Grand Island pride and Viking spirit."
Mary Haggerty, principal of Kaegebein Elementary School called the celebration "truly inspiring." A read-a-thon at Kaegebein was one of the districtwide events that raised more than $10,000.
Other stories that topped the news in 2017 also showed the spirit and can-do attitude of Grand Islanders.
•The Charles N. DeGlopper Memorial Expansion Project to honor Grand Island's Medal of Honor recipient is moving forward with the help of the community. In May, construction work changed the face of the park at the intersection of Grand Island Boulevard and Baseline Road. Workers moved concrete blocks into place and filled them with topsoil, forming an end wall around the north side of the property.
DeGlopper was killed in action June 9, 1944, during the D-Day invasion in World War II. His act of heroism saved the lives of the fellow members of his 325th Glider Infantry Regiment of the 82nd Airborne Division of the U.S. Army.
Eric Anderson, chairman of the DeGlopper Memorial Expansion Committee, said the memorial wouldn't be possible without people donating their time and energy to the effort.
In November, the park expansion received the support of the Niagara River Greenway Commission, making the project eligible for future funding. In December, Erie County Legislator Kevin Hardwick secured a $5,000 budget allocation for the expansion.
•This year also saw the return of popular events that bring the community together and draw attendees from across Western New York. These include the Gus Macker 3-on-3 Basketball Tournament on June 10 and 11; the Taste of Grand Island on Sept. 23, both of which were held in the town center and produced by local event organizer Corey McGowan; and the Grand Island Relay For Life, a life-affirming event on June 9 that marked its 15th year on the Island. This year's Relay raised more than $100,000 to fund research in the fight against cancer and to increase resources for survivors.
•Grand Island youth showed their spirit of ingenuity and creativity in winning two Western New York competitions again this year. On Jan. 11, Grand Island Central School District students continued their domination in a technology contest by winning the 21st annual Tech Wars competition at Niagara County Community College.
Students from both Veronica Connor Middle School and Grand Island High School took first place in their respective divisions.
GIHS won the high school event for the seventh time in nine years, while VCMS won the middle school event for the third time in four years.
And on Aug. 18, the Grand Island team of Kelsey Mahoney, Julie Klein and Tess Lariviere won the 2017 Chalk Walk competition in Lewiston with their 8-foot by 10-foot chalk mural addressing the theme "Interconnectedness."