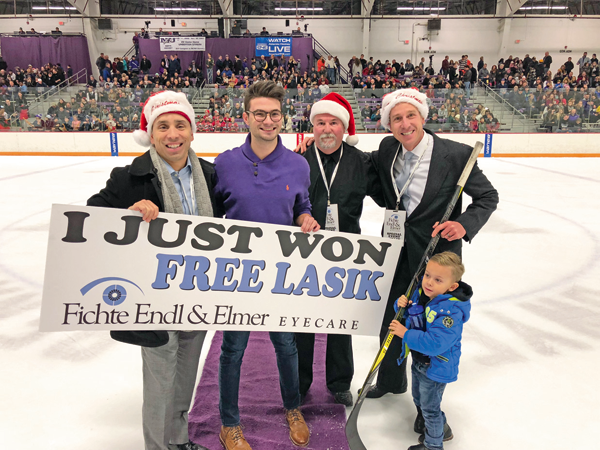 Fri, Dec 22nd 2017 07:00 am
By David Yarger
Tribune Editor
As the holiday season gets closer and closer, the doctors and staff at Fichte, Endl and Elmer Eyecare decided to fit the holiday theme of giving back.
Recently, a Niagara University student received the opportunity to win free Lasik eye surgery: a surgery that would correct the student's vision for good, and make glasses or contacts a thing of the past.
At the Niagara University versus Canisius College hockey game Dec. 8, nursing student Daniel McHale was chosen from the crowd and had three opportunities to shoot the puck from center ice and into the net. After the first shot missed, McHale netted the second and received the once in a lifetime offer and the gift of sight. Dr. Endl, Dr. Elmer and Director of Marketing for Fichte, Endl & Elmer Eyecare Kevin O'Brien presented McHale with the certificate for free Lasik surgery on the ice.
The giveaway is a tradition that's continued annually; this year, though, the group decided to hit the ice. The rivalry game drew a packed house at Dwyer Arena, and in the end, McHale was the recipient of Fichte, Endl & Elmer's generosity.
Categories
Home feature NFP Tribune Tribune feature