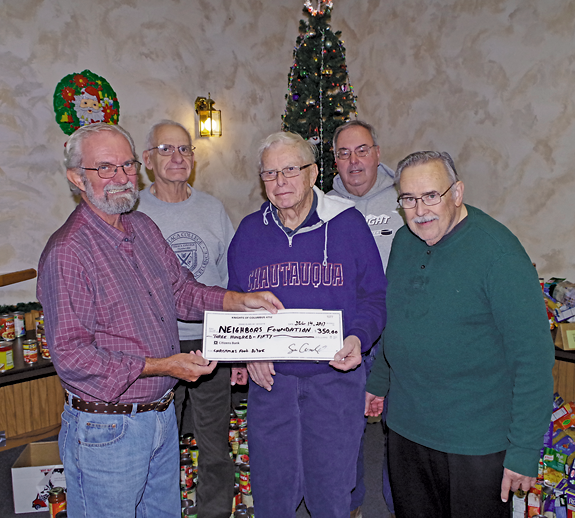 Mon, Dec 18th 2017 01:45 pm
By Larry Austin
Island Dispatch Editor
Neighbors Foundation President Henry Kammerer said 54 families will receive assistance this holiday as part of the organization's Share Your Happiness food distribution.
The number of families temporarily in need this holiday is almost as many as last year, he said, and includes 101 adults, 45 teenagers, and 58 younger children.
Volunteers with the Neighbors Foundation met at the Grand Island Knights of Columbus Mary Star of the Sea Council hall on Whitehaven Road Thursday to undertake the mammoth task of sorting pallets of food for distribution. The food was collected through numerous canned food drives.
Grand Island High School Student Council made 1,000 door-hangers, placing them on front doors asking for help earlier in the month. Students from Student Council, DECA and Interact clubs then returned a few days later to collect donations.
Denny Dahl of the Neighbors Foundation said nine-and-a-half pallets of food were collected and delivered to the Knights of Columbus hall for distribution and pickup by families later that night.
Interact adviser Caitlin O'Rourke and Student Council adviser Melissa Kosmoski were attending the food distribution at the Knights of Columbus for the first time.
"Looking around and seeing how much that we collected and how much everybody donated, it's awesome. It's good for the student too to be involved and realize they're helping the community," O'Rourke said.
Kosmoski called it "overwhelming."
"It puts everything into perspective in the holiday season and shows how much this is needed in the community," she said. "It gives a sense of belonging."
The Grand Island Knights of Columbus Mary Star of the Sea Council was a major donor to the Grand Island Neighbors Foundation as part of the Share Your Happiness drive and food distribution.
Thursday at the Knights Hall on Whitehaven Road, the fraternal organization donated $350 to the Neighbors Foundation.
"Part of the proceeds are from our past meat raffle," said Past Grand Knight Bill Gworek Sr. of the donation. "Please support our meat raffles in the future because these are the kinds of things that we are able to do with the proceeds."
Neighbors Foundation President Henry Kammerer said the Knights' monetary donation will go to purchase gift cards from Tops Markets for needy families so they may purchase perishable foods. The money will fund Target gift cards as well, to purchase toys for youth in the 54 families who are being supported this year by the annual distribution.
The bulk of monetary donations is to purchase turkeys, turkey breasts and hams from Tops.
In addition to money, the Knights held a canned food drive, and they donate use of the hall for two days so volunteers can sort the food. Most of the sorting work was done by students from GIHS, through Interact and DECA clubs and Student "Kids and the families in the schools are unbelievable, aren't they?" said Dahl.
Rosie Boyko, a Student Council officer, said many students look forward to working at the holiday food distribution.
"A lot of kids want to go," Boyko said, "for the feeling of giving and being able to help out other families on Grand Island."
Senior Josh Schaefer has volunteered at the Knights hall for the distribution work since eighth grade. He joined fellow DECA students under the direction of teacher Cheryl Chamberlain.
"It's just good to help out the community," he said of why he volunteers. "It's good to know that everything stays here right on the Island because it's hard to understand that people that live so close to us struggle so much, so it's good to give them the same thing that we have, or close to it."
"I just see it as something that needs to be done for the people to give them a Christmas just like the rest of us," Schaefer said. 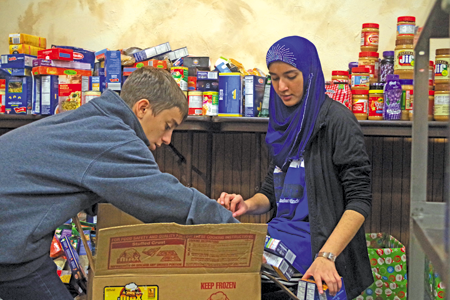