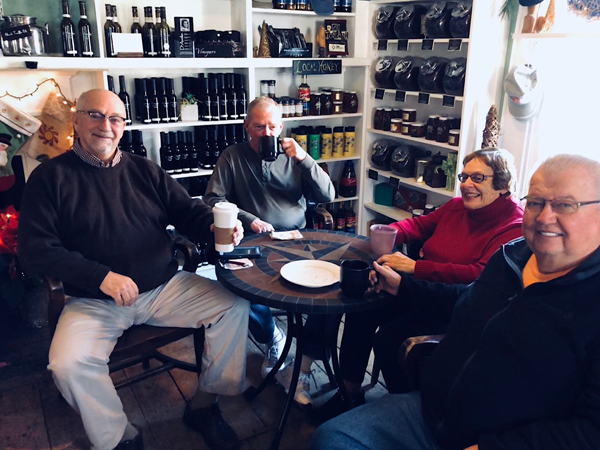 Pictured at the Orange Cat Coffee Co. are, from left, Bruce Sutherland, David, Betty Brice and Bill Bennion. The foursome said Tim Hortons is unlikely to match the locally owned store's quality, nor produce the same sense of camaraderie. ... At the same time, they noted Robert Burns has supported many local initiatives, organizations and groups, including the Kiwanis Club of Lewiston.

Village of Lewiston businesses not worried about proposed Tim Hortons

by jmaloni
Thu, Dec 7th 2017 02:35 pm
By Joshua Maloni
Managing Editor
Four-and-a-half years ago, when news broke of Ellicott Development's intent to build a new Center Street plaza, rumors immediately began to swirl about which tenants the Buffalo company would pursue. It was widely speculated the property management firm would seek out national chains to anchor the 4.1-acre business park.
While many names were bandied about (particularly McDonald's and Walgreens), there was two words many speculated would result in a doomsday scenario for locally owned eateries: Tim Hortons.
Residents worried the addition of a Tim Hortons would mean certain disaster for The Orange Cat Coffee Co. and the Village Bake Shoppe, as well as a significant financial hit for DiCamillo Bakery. After all, Tim Hortons would introduce inexpensive coffee and desserts - and serve them from a drive-thru window.
As rumors ran rampant, it wasn't until Monday that Ellicott Development CEO William Paladino confirmed to NFP the café and bake shop is the plaza's first tenant.
It's expected Tim Hortons will occupy part of the yet-to-be-built structure No. 1, the west-side, two-story building fronting Center Street. The drive-thru will wrap around the shop and lead patrons out to Onondaga Street or North Eighth Street.
While the news of Tim Hortons' arrival was met with mixed reaction from residents, it was taken with a grain of salt from the proprietors of the village's largest coffee and dessert establishments.
Each said much has changed since the plaza idea was first presented in 2013. Namely, these businesses have grown in popularity - and carved out niche products and services not offered by the Canadian coffee company.
Mike Fiore of the Village Bake Shoppe, 417 Center St., said, "I'm really not that worried. I'm just thankful that my customers have been coming here for years. My customers know good product."
The Village Bake Shoppe has a thriving delivery business, and is well-known as a from-scratch kitchen.
"The taste - the quality - is unmatched," Fiore said. "We don't freeze anything. We don't use anything out of a bucket, or anything frozen. Our prices are competitive within the market.
"You're always going to pay a little bit more for quality and for shopping with a small business. Thankfully, our customers know it's worth it, and that's why we're still here."
Skip DiCamillo said, "The more businesses there are, the more all the businesses will grow. I don't really have any problem with as many businesses as they can squeeze on the street, because it just increases traffic."
DiCamillo Bakery has weathered an influx of Tim Hortons springing up around its Niagara Falls and Erie County locations.
The store in Lewiston, located at 535 Center St., has signature Italian cookies, unique gift packages and fresh-made peanut stick doughnuts.
Tim Hortons, DiCamillo said, "It's not going to, I don't think, take anything away from any of the mom-and-pop places. People go to those places because of what they offer and what they have. They have different things than big chains.
"Chains have something, too. People who like them will go and everyone will be happy. I'm sure there's all kinds of people in Lewiston who will enjoy all kinds of different services that are offered."
Michael Broderick of the Orange Cat Coffee Co. declined comment.
This Tim Hortons will be the eighth franchise for owner Robert Burns and CRB Holdings Inc. Less than one month ago, he opened a seventh location, located at Witmer and Military roads in the Town of Niagara, just south of Reservoir State Park.
Burns has not responded to multiple interview requests from NFP.
Tim Hortons also has three more sites less than 10 minutes away from Center Street: two kiosks at Niagara University and a location inside the Duty Free Americas store at the Lewiston-Queenston Bridge.
Moreover, Tim Hortons products are sold at DiMino Tops Lewiston and the Tops Xpress gas station and minimarket. As such, some people in town were under the impression proprietor Anthony DiMino had exclusive rights to add a full-fledged Tim Hortons franchise to the village.
He said that's not the case.
"When Tim Hortons got bought out ... there are no territories anymore," DiMino said. "It's kind of like the Wild West.
"They've been looking for sites - I've been talking to Tim Hortons for a long time. They were only looking for a site on Center Street.
They got the site now." 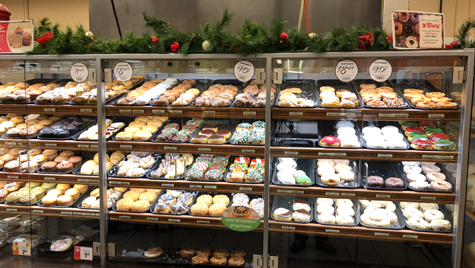 DiMino Tops Lewiston has more than three-dozen different types of doughnuts prepared fresh each day.
DiMino said he predicted Tim Hortons would enter into an agreement with Ellicott Development for a spot in the plaza, and wasn't surprised Burns capitalized on the opportunity.
At the end of the day, DiMino said Burns "is in the Tim Hortons business. I'm in the grocery business."
DiMino noted, "We'll be out of the Tim Hortons business the day he opens his drive-thru.
"Am I happy about it? Not really. But it is what it is."
Lewiston Tops, at 906 Center St., offers fresh doughnuts each day. The store presently has more than three-dozen different doughnut types, as well as a dozen varieties of muffins, and rows of cakes, cookies, turnovers and other baked goods.
"Ours are not frozen; ours are fried daily," DiMino said of his store's doughnuts.
Paladino said Tim Hortons is the plaza's sole tenant at this time.
Village officials are expecting to learn more about the interior of the other two plaza buildings in the next few weeks, if not specifically the tenants.
Tim Hortons opened in 1964 in Hamilton, Ontario. Today, it is part of the Canadian company Restaurant Brands International.
The RBI website states eight out of 10 cups of coffee sold north of the border are poured at Tim Hortons restaurants.
Categories
Home feature NFP Sentinel
comments powered by Disqus