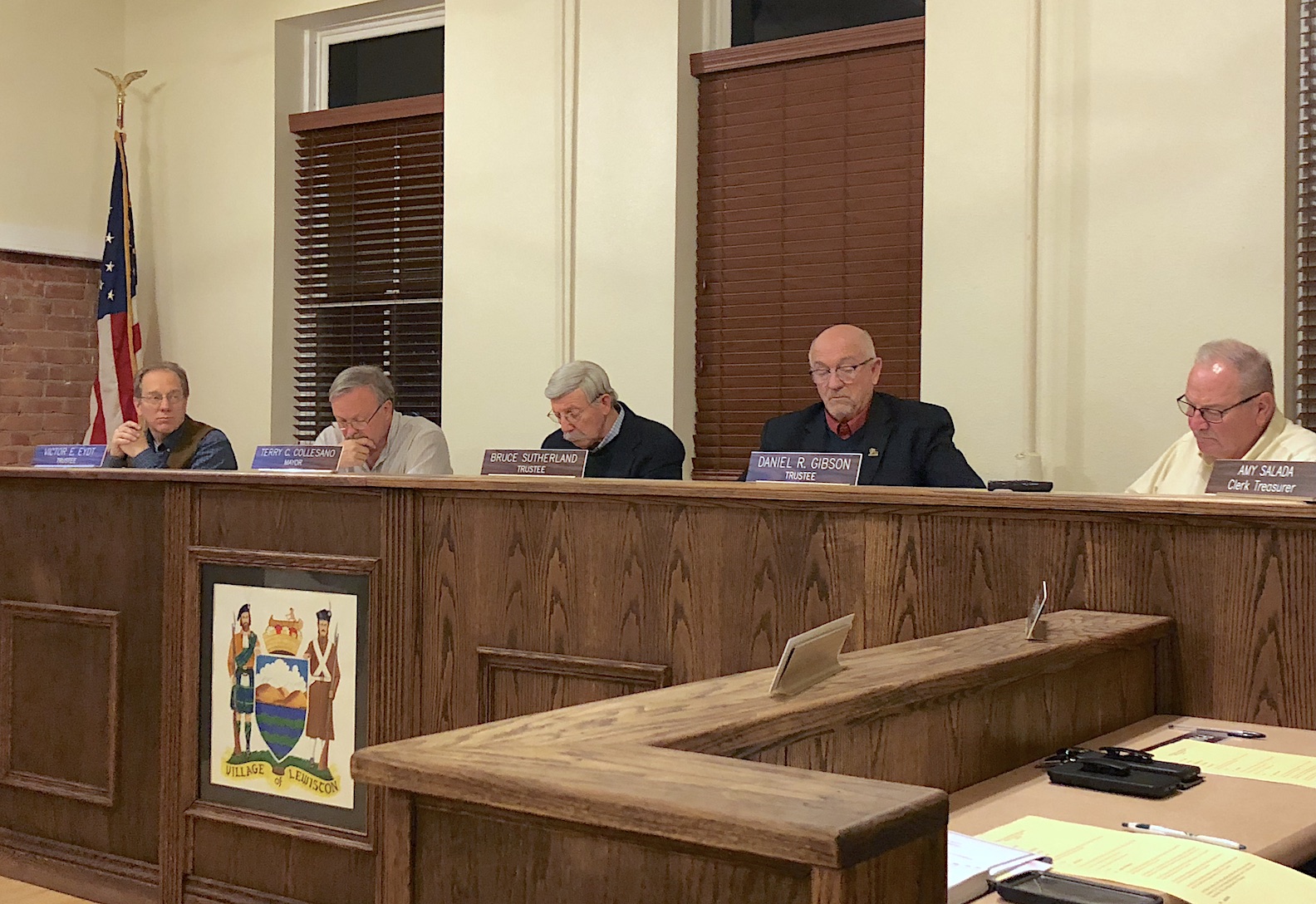 The Village of Lewiston Board of Trustees.

by jmaloni
Tue, Dec 5th 2017 05:40 pm
By Joshua Maloni
Managing Editor
The Village of Lewiston has become a party to a lawsuit seeking to block polychlorinated biphenyls from entering the River Region.
Lewiston resident Amy Witryol recently contacted the village, asking the Board of Trustees to file papers in Erie County Supreme Court to participate in support of her lawsuit against the New York State Department of Environmental Conservation, CWM Chemical Services LLC, and its parent company, Waste Management Inc. of Houston.
Following the meeting, Witryol said, "The purpose of the lawsuit is to prevent the 1993 Siting Board approval, specific to the RMU-1 landfill, from being hijacked into a permanent and illegal license to import PCBs and hazardous waste for treatment in vented tanks and mixing pits or for redrumming and storage at CWM. The RMU-1 facility approved 25 years ago is now closed, and so, too, should all PCB and hazardous waste imports into this community."
The CWM facility is located on Balmer Road in the Town of Porter. CWM ceased active hazardous waste landfilling in Porter upon closure of its Residuals Management Unit 1 landfill at the site in November 2015.
Witryol and Thomas Freck of Porter announced the filing at a press conference in late October. They were joined by Niagara County Legislator Clyde Burmaster and Town of Lewiston Councilman Alfonso Marra Bax.
Since that event, other municipalities have endorsed the petition.
Following comment from municipal counsel Joseph Leone, who said, "it appears to me the lawsuit has merit" and "should be litigated, in my opinion," the Village of Lewiston Board unanimously approved a motion. The text can be found below.
The Village of Lewiston is opposed to a CWM expansion continuation.
Trustee Vic Eydt said, "We've gone on record before saying that we're against this. I think that, with everything that's been going on, I think (CWM is) waiting - I think they're trying to wait everybody out. I think the village, being a large part of the town, should be on this."
Deputy Mayor Bruce Sutherland said, "I'd like to go on the record in support of Amy and the Residents for Responsible Government, and the quest to stop the spread of any more contaminant in our area. As a community, we have done more than our fair share in allowing that to happen. We are a huge watershed for the Great Lakes, and our community and schools have been threatened long enough."
•••
The Village of Lewiston Board of Trustees approved a motion that states:
"Whereas the Village of Lewiston Board of Trustees seek to promote the health, safety, and general welfare of the community;
"Whereas the Village of Lewiston and the Town of Lewiston have long opposed the commercial importation of PCBs and hazardous waste for treatment, storage and disposal activities Lewiston-Porter community near schools, farms and homes.
"Whereas the Village of Lewiston and the Town of Lewiston have long opposed the commercial transportation of PCBs and hazardous waste through the Lewiston-Porter community, and past all public schools;
"Whereas the commercial importation of PCBs and hazardous waste for disposal in the community ceased In November 2015 and the associated landfill was certified as closed in June of 2017 by the New York State Department of Environmental Conservation;
"Whereas the Village of Lewiston, the Town of Lewiston, the Village of Youngstown, Niagara County, the Lewiston-Porter Central School District, the Niagara County Farm Bureau and Residents For Responsible Government, Inc. are intervenors in state regulatory proceedings in opposition to an application to site a massive new PCB and hazardous waste landfill in the community;
"And whereas a petition and complaint was filed by area residents on October 19, 2017 in Erie County Supreme Court to prevent any impermissible commercial PCB and hazardous waste treatment and storage activities in the community;
"Be it resolved that the Village of Lewiston wishes to file papers with the court to participate in support of the residents' petition, in such form and substance deemed appropriate by counsel to the Village of Lewiston;
"Be it further resolved that no expense shall be incurred by the Village in advance of approval by a meeting of the Village Trustees, and be It further resolved that a copy of this resolution be forwarded to the intervenors."
Editor-in-Chief Terry Duffy contributed to this report.
Categories
Home feature NFP Sentinel Sentinel HP Feature List
comments powered by Disqus