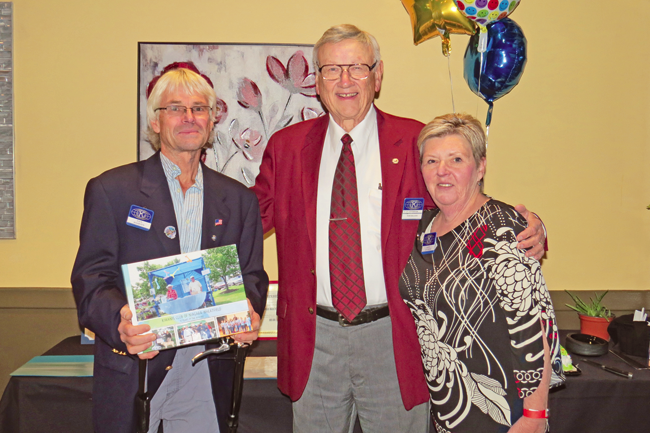 Wed, Nov 22nd 2017 09:25 pm
Kiwanis Club open to new members
By David Yarger
Tribune Editor
Last Thursday, the Niagara-Wheatfield Kiwanis Club met at Jacks, 6935 Ward Road, to celebrate its 10th anniversary. Several members of the Niagara Frontier North Division of Kiwanis were in attendance, including the Amherst, Clarence, Ken-Ton, Lewiston and Tonawanda Kiwanis Clubs.
The club was established on Nov. 15, 2007 and club president Daniel Maerten was extremely proud of the accomplishments the Kiwanis Club had garnered over 10 years.
"This is my third year as president and this club is really like a family to me," Maerten said. "In 10 years we have sponsored and support four student leadership programs. We have the West Street Elementary 'K Kids' ... we also have the 'K Kids' at Errick Road Elementary, Colonial Village Elementary and the Builders club at Edward Town Middle School. To me, this our big achievement for 10 years."
Maerten added the clubs gives out two $1,000 scholarships to graduating residents of the Town of Wheatfield and Town of Niagara, sent kids to Camp Kiwanis, and buy yearly Christmas gifts off children's wish lists that are victims of domestic violence. In addition, the club runs a take a book, give a book, share a book program, a yearly family picnic, takes care of Ward Road, the club's adopted highway, yearly pancake breakfasts, and help put the Town of Niagara Electric Lights Parade in order.
Also in attendance was Distinguished Past Lt. Gov. of the Niagara Frontier Division of the Kiwanis, Tom Beachy. Beachy helped get the ball rolling to bring the Kiwanis Club to Niagara-Wheatfield. Beachy, also a member of the Lewiston Kiwanis, said, "The goal was to get 30 new members, and with the work of going door to door and business to business, we managed to get 30 members and we had the charter at the Niagara Falls Air Base. Our first president was Alice Attardo. Alice set the standard of leadership for the club, which exists right to today."
Beachy added that the Lewiston Kiwanis is the sponsor to the club and without them it would've been a struggle to get started.
Near the end of the speeches, a pin ceremony was held, as pins were handed out to members who had been in the club for certain amounts of years.
Maerten said the club's main goal and focus is on the children of the area and the club maintains between 20-25 members.
"We're basically oriented on helping kids," he said. "We try to help the kids right in our area."
Maerten said the club meets every Thursday at Jacks and is always open to new members and there is no pressure to join.
Maerten also said he wants to continue growing and doing more within the community to help kids.
"One of my main things is helping the kids in the area, and I just want to keep progressing on it. I want to get some more fundraisers ... we're trying to come up with another big fundraiser so we can actually buy more stuff to help people out," he said.
Maerten also credited the people of Wheatfield for acknowledging the club's existence and the support they've given over the years. He called it, "a big pat on the back."
Categories
NFP Tribune Tribune HP Feature Picture
comments powered by Disqus