Fri, Nov 10th 2017 03:25 pm
Newcomer joins Lewiston Town Board
By Terry Duffy
Editor-in-Chief
Northern Niagara residents hit the polls on Tuesday and spoke their minds with most candidates handily winning their respective offices - save for one exception in the Town of Lewiston. There, voters sent a message to the GOP-controlled majority by electing Democrat John O. Jacoby Jr.
While incumbent Steve Broderick (R, C, I) won election for supervisor with 2,734 votes in an uncontested race, it was the election of newcomer Jacoby (D, Wor, Wep) to the Lewiston Town Board that proved the surprise in Tuesday's voting.
A former battalion chief with the Niagara Falls Fire Department, Jacoby took second in the overall count for Town Board with 1,847 votes cast. Incumbent Alfonso Marra Bax (R, C, I) finished on top with 1,934.
Rounding out the vote count was Victor E. Eydt (R, C, I) a trustee on the Village of Lewiston Board, who finished third in the Town Board race with 1,748 votes; and first-time candidate Francis C. Flanagan (D, Wor, Wep) with 1,695 votes.
Three write-in votes were also reportedly cast for Lewiston resident Paulette Glasgow, a member of the Lewiston Taxpayers Accountability and Action Alliance, who previously served on the Town Board.
Commenting on the outcome, a surprised Jacoby expressed his appreciation to voters.
"I'm really grateful that the people saw fit to vote for me. It's my first time I ran, and it's really a great result for me," he said.
Jacoby added, "What stood out the most is when I went door-to-door and the receptiveness of the people I talked to."
Of his future efforts at Town Hall, Jacoby said he intends to work for the concerns of residents - one of them being ongoing discussions involving development proposals in the town.
"I'm very concerned for the people in the Escarpment Drive area, and the project on Bronson Drive," Jacoby said. "I'd like to make absolutely certain that they get the best possible deal they can get with the developers.
"One other thing I'd like to look at is the Bri Estates project in the Town of Niagara, and the drainage impact on the Town of Lewiston. I don't think it's an exaggeration, I think that's going to cause a major issue. I'd just like to see the Town of Lewiston Board take a proactive stance with this, and get ahead of the curve, before the development goes in, before we have the water problem."
Of his expectations on cooperatively working with the new board, Jacoby said he's looking forward to it.
"I've talked to those guys repeatedly, they're very cordial; I like the guys. I'm looking forward to it," he said.
Following Tuesday's outcome, Broderick, joined by Councilman Bill Geiben, dropped by the Lewiston Democratic Committee gathering at Apple Granny Restaurant to welcome Jacoby to the board and wish him well.
"Congratulations," Broderick and Geiben both said.
"From now on, you'll get all the paperwork," Geiben told Jacoby as he offered a handshake. "So you can hit the ground running."
"Now you can join us in all those executive sessions," Broderick joked as the two departed. 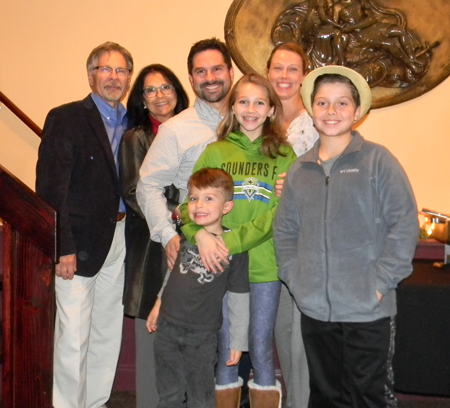 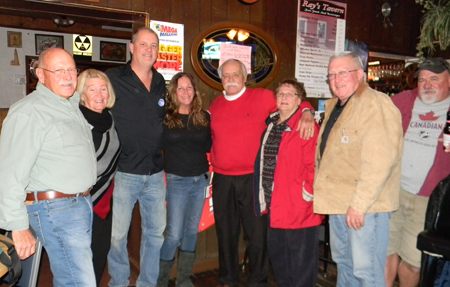 As noted, voting went more or less as expected for the balance of the other local races.
In the Town of Porter, John "Duffy" Johnston (R, C, I) ran uncontested in the race for supervisor following his September primary election win over long-time incumbent Mert Wiepert. He netted 1,343 votes.
For the Town Board, Timothy S. Adamson (R, C, I), a member of the Village of Youngstown Board of Trustees, was elected with 1,212 votes. Newcomer Irene M. Myers (R, C, I) of Ransomville won the second contested seat with 1,144 votes, while Youngstown resident William P. Suitor (OMJ) finished third with 466. The Town Board race also had six write-in votes.
Other results in the town saw incumbent Justice David J. Truesdale (D, R, C, I, Gre, Wor) re-elected with 1,486 votes in the uncontested race, and James A. Sharpe (R, C, I) taking the seat for tax collector with 1,269 votes.
In the Town of Wilson, incumbent Doyle H. Phillips (R, C, I) won the race for supervisor with 869 votes over challenger Janet M. Hoffman (D) with 564.
Town Board winners were incumbent Brad L. Clark Sr. (R, C, I) with 1,115, and newcomer Robert A. Hull (R, C, I) with 1,088. There were 11 write-in votes.
In Niagara County races, incumbent District No. 1 Niagara County Legislator Clyde L. Burmaster, (R, C, I) won re-election with 2,700 votes (eight write-ins cast) in an uncontested race; and incumbent District No. 2 Legislator Rebecca J. Wydysh (R, C, I, Gre, Ref) bested former Town of Lewiston Supervisor Fred M. Newlin (D, Wor) by a count of 1,548 to 886, with one write-in vote.
James E. Carroll (R, C, I) won for county coroner, District 4, with 8,212 votes; Matthew Murphy III (R, C, I) claimed the Niagara County Court judge and surrogate position with 35,143 votes; and in the contest for State Supreme Court justice, 8th Judicial District, winners included Lynn Wessel Keane (D, R, C, Wor) with 32,480 votes, and Erin M. Peradotto (D, R, C, Wor) with 31,862 votes (135 write-ins).
Categories
Sentinel Sentinel feature Sentinel HP Feature List