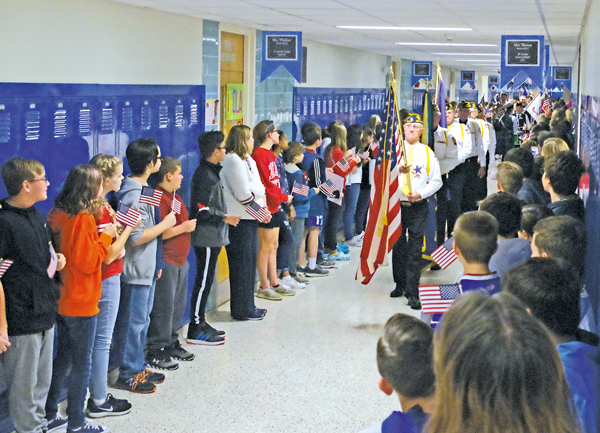 Ray DeGlopper leads a parade through the halls of Veronica Connor Middle School during an event honoring veterans. Students applauded as the parade made its way through the middle school and high school Monday morning. (Photo by Larry Austin)

Fri, Nov 10th 2017 03:05 pm
By Larry Austin
Island Dispatch Editor
A thousand students in the Grand Island Central School District honored veterans Monday during the first-ever veterans parade at the middle school and high school.
Veterans were invited by the district to Veronica Connor Middle School and Grand Island High School where they paraded through halls lined with students who applauded them while waving flags and holding patriotic signs.
Dr. Brian Graham, superintendent of the Grand Island Central School District, said "Grand Island has such a rich history of honoring veterans of our military services, and today is just another example of the entire middle school and high school community coming together to recognize all that our veterans of the military services have done in sacrifice for the freedom that we enjoy today."
The parade route began in Connor Middle School where Connor Middle School Assistant Principal Max Pikula spoke to the school on the public address system and said the men and women in the hallways had "shaped our country's values in a special way."
"We stand in the midst of patriots and the family and the friends of those who have nobly served," said Pikula, adding that the service members shared several fundamental qualities: courage, pride, determination, selflessness, dedication to duty, and integrity.
Veterans of Foreign Wars Post Commander Ray DeGlopper led the parade with the Stars and Stripes followed by approximately 50 veterans, some of whom work in the school district.
Before the parade began through the high school, Assistant Principal Robert Julian spoke on the public address system and said, "We can never fully repay our debt of gratitude to the more than 1 million service members who died in battle or the 1.4 million who were wounded. We can, however, recognize and thank the 25 million veterans still living today."
When the veterans ended the parade in the high school cafeteria, they were treated to a breakfast and heard the Grand Island High School Concert Choir sing "God Bless America," "America the Beautiful" and "The Star-Spangled Banner."
"I thought this was very unique that the whole complex became involved in it," said parade participant Dan McMahon. "I've been to several of these around the area and never saw anybody really get the whole school complex together."
"I hope that it becomes an annual event so that we can recognize the veterans around the Island, because many, many people don't realize who the veterans are," he said.
Students saw many familiar faces in the parade of veterans, such as teachers, staff, and administrators. Graham thanked principals John Fitzpatrick and Michael Lauria for not only inviting veterans from the community, but inviting employees in the district who are veterans to take part as well.
"For everybody in the school community to see so many faculty and staff who have provided their service to our country, I think it's extremely powerful," Graham said.
• • •
The Town of Grand Island will hold Veterans Day services Saturday, Nov. 11, at 11 a.m. at Veterans Park, 1717 Bedell Road. 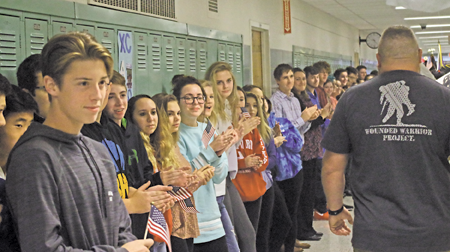