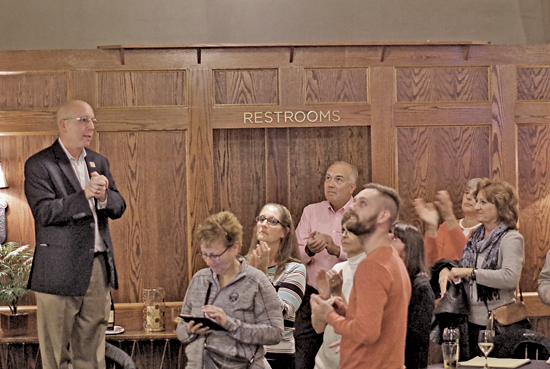 Fri, Nov 10th 2017 03:00 pm
By Larry Austin
Island Dispatch Editor
The Grand Island endorsed Republicans swept all four seats up for grabs in Tuesday's general election.
The GOP was victorious in the race for two seats on the Grand Island Town Board, with newcomers Pete Marston and Jennifer Baney winning seats held by Conservative Chris Aronica and Republican Ray Billica, who did not run for re-election, over Cyndy Montana and Celia Spacone. Mark Frentzel was re-elected town justice, and Deputy Highway Superintendent Dick Crawford won a close race for highway superintendent over challenger Dan Drexelius to replace retiring Highway Superintendent JT Tomkins.
"Congratulations to all the candidates who put their names out there to run," Crawford said. "It's very difficult to put your life on hold and run for an office and put your family under the scrutiny and the pressures of an election. It doesn't matter how many times you run. Your emotions are still the same."
Frentzel defeated challenger Eric Soehnlein for his fourth election victory without a loss. "Every election is different, and no matter what election you're running in, you always have to run like you want to win. And in this race both candidates wanted to win," Frentzel said.
"It was refreshing to have a well-fought campaign on both sides," Frentzel said. "Speaking for myself and Eric, we were both thankful that we ran a clean campaign as judicial candidates should."
"This is a very humbling experience, and I'm very honored," said Marston, a Grand Island Boulevard business owner and chairman of the town's Planning Board. "Grand Island came out to support us tonight."
He said a key to the win was the GOP team "stayed out of the mud. Completely." 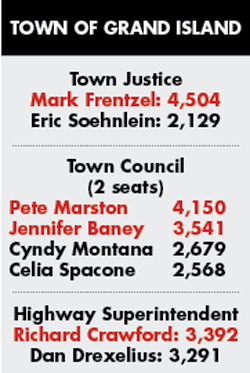 Baney said her message of unity helped her go from being a complete political unknown to winning a council seat in her first attempt at elected office.
"I found a message that resonated with what our Islanders were looking for," Baney said. "They were willing to cross party lines to find a candidate who would advocate for stability and collaboration. The message was clear today. As Grand Island, we need to unite, and I look forward to serving in 2018."
Crawford offered congratulations to Drexelius and his team on the race. He had stood on a chair at Ellden's to console supporters after initial vote totals projected on the wall showed Drexelius was a 31-vote winner.
Baney was crestfallen at the initial news that Crawford had lost and didn't fully rejoice in her victory until later. Marston added, "We're still a little worried about our one teammate, Dick, because we're a team and we all worked together hard as a team."
Within an hour, the GOP found their math error and posted a 101-vote victory for Crawford.
"Basically, it came up on the screen and then everybody started cheering. We had no idea," said former councilman Gary Roesch. "So it was a complete surprise to Dick, no question, and a lot of other people, because we were really down in the dumps about it."
Roesch was reminded of another highway supervisor election from 20 years ago, when Skip Mrkall won the highway superintendent election by one vote in similar dramatic fashion.
"It's a whole circle of emotion," Crawford said after the night was ending. He told supporters, when he thought he had lost, that the race would come down to a canvas of absentee ballots. "And it still is a canvas of the absentee ballots that could change this election," Crawford pointed out.
The Democrats were also off on their vote totals at their election party, held in Mallwitz's Island Lanes. Initial tallies there had Drexelius losing by more than 500 votes. Meanwhile, the county Board of Elections website had seemed to crash.
Drexelius called the campaign "a lot of fun. It truly was. I met a lot of good people."
"When I look around this room, I don't feel like I lost," Spacone told supporters. "I feel like I truly won."
Calling herself a newcomer to Grand Island, she said she felt sorry for her campaign supporters, who she said worked hard for her.
"Don't stop the fight. We have good values," Spacone told them.
Montana thanked Jim Sharpe, the party chairman, calling him motivating and an incredible leader.
Soehnlein praised his supporters as well.
"You were out in the cold, you were out in the heat, you were banging on doors," he said. "I can't tell you how much it means to all of us that you were putting in the time and effort."
Not so fast, Mr. Crawford. Republican candidate for highway superintendent Dick Crawford talks to supporters at Ellden's Grill & Banquet after election results posted showed him losing to Dan Drexelius by 31 votes. (Photo by Larry Austin) 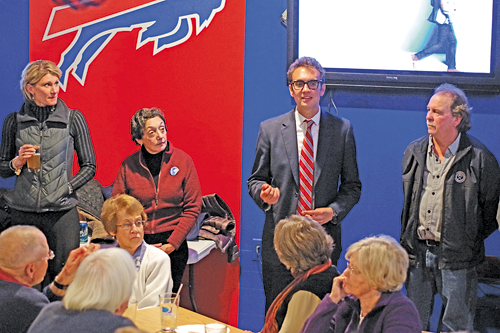