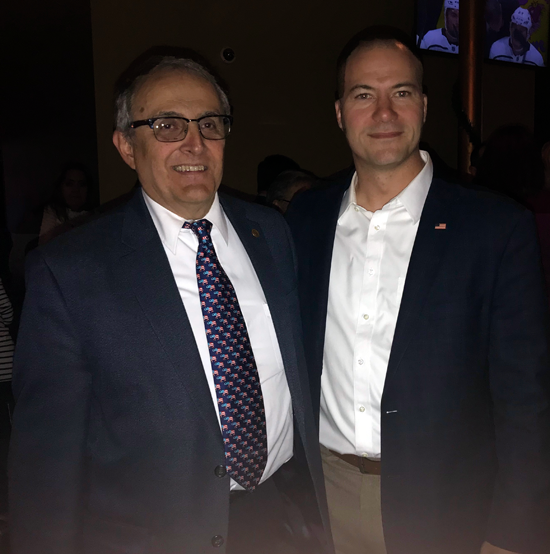 Mayor Arthur Pappas poses with New York Sen. Rob Ortt at Canal Club 62 after being announced he was re-elected by the citizens of North Tonawanda. (Photo by David Yarger)

Pappas to stay on as mayor in NT

Fri, Nov 10th 2017 02:25 pm
Berube, Braun, Zadzilka re-elected as aldermen, Tylec earns alderman at large spot
By David Yarger
Tribune Editor
Chants of "four more years" reigned down at Canal Club 62 Tuesday night, as it was announced that Arthur G. Pappas was re-elected as Mayor of North Tonawanda.
Pappas defeated James McGinnis, 3,963 (56 percent) to 3,166 (44 percent) in the election on Tuesday, and he was pleased to see the people of North Tonawanda backed him and supported him.
"I'm humbled and I'm very proud of the fact that they seemed happy with the course we're on. I think the city is heading in the right direction and the community and all those I have dealt with and talked to have been very supportive and they seem to agree. By the turnout tonight and the vote, I'm very elated that they are putting their trust and faith in me again," Pappas said.
Pappas added he wants to stay on the track that the city is on to get even better and that can happen if the citizens and city government work together as a team.
Donna Braun will also be returning as alderman of the second ward of North Tonawanda. She defeated Peter Smolinski, 889 (52 percent) votes to 822 (48 percent). She was very happy to be back and couldn't wait to get back to work.
"I'm very proud to represent the second ward. I'm very happy that they decided to keep me here representing the second ward of North Tonawanda. I love this city and I want to keep moving forward with the progress that we have going on in the city. ...I worked very, very hard all summer to make this happen, so I'm very happy about the win," Braun said.
Braun promised to put her passion and love for the city into making the city the best city she could for families here and families attempting to move back into North Tonawanda.
In other election news, newcomer Austin Tylec (D) defeated Jeffrey Glatz for the alderman at large seat, 4,065 (58 percent) votes to 3,001 (42 percent).
Mark Berube will return as alderman of the first ward. He defeated Sean Polen, 1,195 (52 percent) votes to 1,092 (48 percent).
Eric Zadzilka will also return to the North Tonawanda Council, as he defeated Joanne DalPorto, 1,497 (51 percent) votes to 1,413 (49 percent) to become alderman of the third ward.
Richard Andres Jr. also defeated David Fingerlow, 1,457 votes to 836, to win the county legislator of District 8 election. Randy Bradt won the election for district 9 over Edward Smolinski, 2,009 votes to 1,893. Lastly, Kathryn Lance defeated Adam Dickey, 1,261 votes to 1,055 to win the district 7 race.
Categories
Tribune