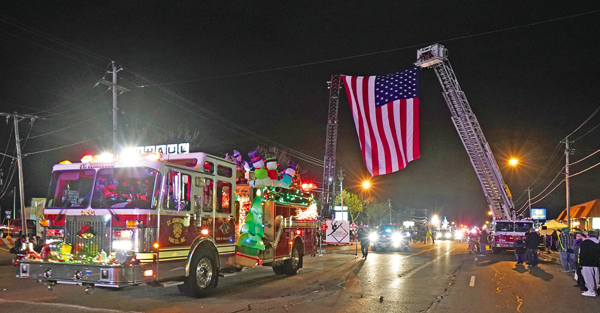 Fri, Nov 10th 2017 02:20 pm
Thousands line up along Military Road for annual holiday parade
By David Yarger
Tribune Editor
On Saturday, thousands of people filled the sidewalks of Military Road for the 13th annual Electric Lights Parade in the Town of Niagara. The holiday kickoff parade drew people and organizations from around surrounding counties of Western New York.
The weather was a bit chilly and gave a little taste of winter, forcing some people to watch from their heated cars in adjacent parking lots to Military Road, but most people decided to stick it out and get up close to the parade.
Some people, like John Paul and his family and friends, set up shop early along the road. Paul, who was born and raised in Niagara Falls, had two tents set up in front of the Big Lots plaza with tables piled with food and coolers with beverages. The setup was eerily similar to a tailgate at a Sunday Buffalo Bills home game.
Paul said his crew arrived around 3:30 p.m. to start setting up for their sixth Electric Lights Parade. Paul added, "We look forward to it, for the kids and for us and we keep coming back to keep getting back with everybody."
Event chairman Gary Strenkoski noticed the abundance of people and noted how early they were setting up.
"I was working on the parade all day, so I was going up and down Military Road all day. I saw people setting chairs and tents up around 3 p.m., so it's nice that people are excited and expect it every year," Strenkoski said.
Strenkoski, who was in the back of the parade thanking the participants, said it's gratifying and hearing people call him by his first name as he walked down Military, adding it was something that makes him want to come back every year.
In a phone interview with the Tribune on Monday, Strenkoski said he still felt great from the parade and he said some of the group parade directors told him it was the best parade they'd been in.
The parade itself included holiday music, and themed floats. The parade also had 10 bands that played down Military Road, including the Pembroke Marching Dragons, Downbeat Percussion, Niagara Falls High School's marching band, the Sanborn Fire Co. band and the Erie County Sheriffs Pipes and Drums, to name a few.
First responders were also represented in the parade, as numerous units from around Western New York joined in on the festivities.
Town councilmen Marc Carpenter, Sam Gatto and Charles Teixeira walked alongside each other in the beginning of the parade.
Also riding in the parade was Niagara County Peach Festival Peach Queen Jamie Hagerty. She rode solo on her own float and made a sizeable donation to the parade's food drive.
Adell's School of Dance represented themselves well in the parade, as they performed a dance in front of the main stage. The event emcee Bob Koshinski, and Town Supervisor Lee Wallace both sat on the main stage for the event.
Niagara Catholic High School took home first place in the parade for the best float. It proclaimed "Have a holly jolly Niagara Catholic Christmas" and was very bright with several holiday themed creations.
Strenkoski gave credit to all the floats that participated saying they were very brightly decorated.
Fan-favorite Santa Claus rounded out the parade, greeting children standing along the road.
Strenkoski also appreciated the help everyone gave, from Joe Cecconi lending the parade cars and their role in the food drive to major sponsor Allied Waste, to all who helped Sunday in the pouring rain, cleaning Military Road and many more.
Strenkoski said, there was about two plus tons of food donated and the food drive was "over the top" this year. He added he will definitely be back for next year, and is looking forward to it. 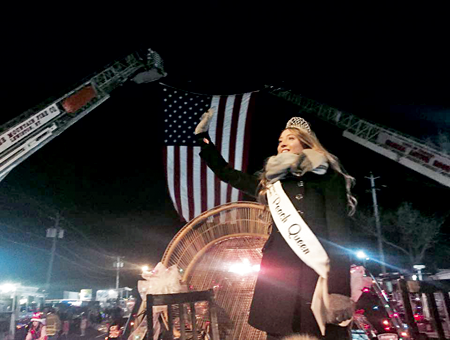 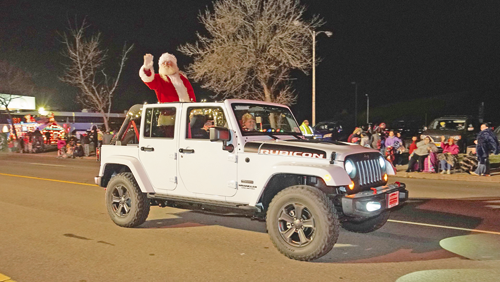