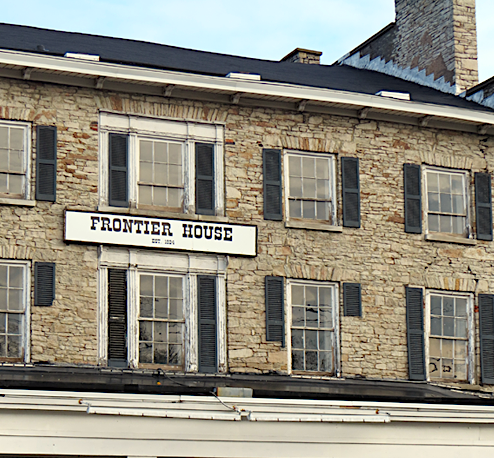 The historic Frontier House at at 460 Center St., in the Village of Lewiston.

FRONTIER HOUSE COULD BE SOLD

by jmaloni
Tue, Nov 7th 2017 12:35 pm
By Joshua Maloni
Managing Editor
The Village of Lewiston's crown jewel has a new owner - one who has yet to be identified.
Over the weekend, the Hastings family - Richard, his wife, Judy, and son, Alan - reached an agreement to sell the Frontier House and almost one acre of property for $800,000. The deal was represented by Dian Ruta, a licensed associate broker with Great Lakes Real Estate Inc.
Alan Hastings said the new owner, a man whom he wouldn't name, has local connections, a construction background and experience with historical remodels.
Not eager to provide much more information, Hastings did offer, "It sold, and I'm happy to have found a buyer who has the means and the interest to fix it up and make it happen."
Hastings family business consultant Stacey Sheehan said a purchase contract was signed Saturday.
"The identity of the buyer and their future intentions for the building are not mine to share, and I feel compelled to leave it to them to introduce themselves in the manner they find most comfortable," she said.
Ruta also declined comment. She said company policy prohibits her from disclosing the new owner's name.
Sheehan added, "In the meantime, winterization, minor repairs and cleaning will continue to take place at the building."
The Hastings family was recently told the Village of Lewiston intended to pursue legal action and ask for daily fines until the building's exterior is winterized to the satisfaction of Building Inspector Ken Candella and Zoning Officer Ed DeVantier.
"At a meeting earlier (Monday), I formally requested the patience and cooperation of the Village of Lewiston to allow for the sale to proceed to closing in an amicable way following a traditional commercial real estate timeline - and given the circumstances, I also requested that no further action is taken against the current ownership during the time it takes for the transaction to run its course," Sheehan said.
Following an executive session Monday night, the members of the Village of Lewiston Board of Trustees said they are aware negotiations occurred, but do not have any details.
Speaking on behalf of the board, municipal counsel Joseph Leone said, "We do know there has been some requests of us to not go forward with code violations. Right now we know that there are 19 exterior code violations. ... We're not going to issue any kind of a moratorium on going forward. We are going to continue to cite and determine what those violations might be. As to when we're going to file them in court - if at all - that's still open for discussion."
Leone and board members said they will take a wait and see approach - for now.
"We need to know what's going on. So, in the meantime, is there a building out there that our code enforcement officer (DeVantier) says needs repair? There is. And we're not going to ignore that," he said.
However, Leone echoed the sentiment of the Village Board members when he said good faith efforts by the Hastings family and/or the new owner could prevent court filings.
As for Village of Lewiston residents, who have waited to see what would become of the 193-year-old building since it shut its doors in 2004, Leone said, "I think everyone in the village ought to be excited about this."
He added, "If and when a closing occurs, and if and when a determination is made by a proposed purchaser as to what they would like to do with the Frontier House, they'll have to go before the Planning Board just like everybody else. But at this point, we don't know what any proposed usage might be."
SEE RELATED:
•Despite efforts this week, new Frontier House principal Alan Hastings could be subject to fines
•Village of Lewiston HPC ready to issue Frontier House fines
Categories
Home feature NFP Sentinel Sentinel feature Sentinel HP Feature Picture