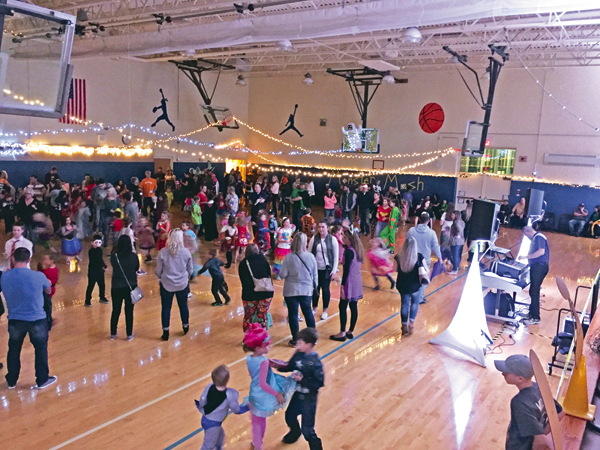 The first-ever Monster Mash, a fundraiser to raise money for a new playground at Sidway Elementary School, took place at the school Oct. 27.

Fri, Nov 3rd 2017 07:00 pm
By Larry Austin
Island Dispatch Editor
Sidway Elementary School Principal Denise Dunbar was a little more afraid heading into Halloween than usual.
Dunbar was a tad nervous before the first-ever Monster Mash Halloween party fundraiser took place at the school Oct. 27.
"Bringing 5- and 6-year-olds back to school at night is silly," Dunbar said. "Bringing them in a costume is super silly. Putting them in a dark gym with crazy lighting and loud music is over the top silly. So, yeah, I was a little worried about how it was all going to go, but it just was phenomenal."
Monster Mash was the first fundraiser in an anticipated two-year process to support building a new playground at Sidway Elementary School on Baseline Road. Dunbar hopes the next two years are as successful as the first fundraiser.
Dunbar said the current playground at the school is more than 20 years old and is showing its age. To begin the process of building something new, she reached out to Dave Brand, a parent of a student at Sidway Elementary, who was a leader in the development in a new playground at Kaegebein Elementary School. A playground committee was formed in September and set up a Halloween event as its first fundraiser.
The children and parents danced in the gym decorated with lights and visited a haunted house made by teachers in the fitness room.
"You don't typically do dances for kindergarten and first grade, but we thought, let's give it a try," Dunbar said. She estimated between 500 and 600 people attended Friday night in costumes.
Premier Sound donated their time, disc jockey, lighting and two photo booths, which Dunbar said were all a big hit. The Girard family donated four VIP tickets to last Sunday's Raiders-Bills game as well, and that raffle alone raised $760. In total, the event made $4,187.77 profit.
"So it was a great first start," Dunbar said. "I'm just so thankful to this community because we had people donating $20, $50 bills into a loose change jar we had out. This community is just always so supportive of the schools, and what I have experienced in my 12 years here, they have always been so supportive of Sidway."
"We're just so grateful and I'm just so proud to be part of this community and to have this kind of support."
Dunbar estimated the new playground could cost somewhere between $50,000 and $70,000.
"We know it's going to take a while, but, wow, what a great first fundraiser."
Future fundraisers the committee is considering include a father-daughter/mother-son Valentine's Day dance.
The playground committee consists of teachers, staff and parents.
"There is not a faculty member that did not participate in some way, shape or form" in making the Monster Mash happen, Dunbar said, from decorating the gym to food to running raffles.
"It really was an entire faculty, staff and parent initiative, and I couldn't do it without Dave Brand, either. He's super," she said.
A playground isn't just a luxury, but an important part of a child's development. Children need physical exercise, Dunbar said, noting, "We know from brain research it helps children learn better."
"It's all part of early childhood development," Dunbar said of recess.
A new playground will be on the same location as the current playground.
"There's a lot of change in playgrounds in what is considered safe," Dunbar said. "We have some monkey bar-type apparatus now that is not considered safe for this aged kid."
"Some of the equipment needs to be more age-appropriate for our kids," Dunbar said.
While old playgrounds typically tax a child's upper body strength, new playgrounds feature equipment that manufacturers make to stimulate total body sensory input.
"And our playground is not at all handicap friendly," Dunbar said. The company chosen to provide the equipment for the new playground will make something children of all skill levels can use, Dunbar said.
The current playground is starting to tax the district's bottom line. "It's just time to upgrade. In the last couple of years, I've had to replace or remove two different pieces," Dunbar said. Not only did it take months for a replacement part to come in, Dunbar said, but the one piece cost over $1,000.
This spring another piece of equipment broke, and Dunbar had it removed entirely because it was just too expensive to fix. She called the cost "astronomical."
"For me it was kind of like the point you get to when you have an old car," Dunbar explained. "Do I keep putting more money into it, or do I just get to that point where you're not going to do that anymore and you've got to trade it in and get a new model?"
An upgraded playground will be safer, more accessible, and more current regarding child development, Dunbar said, while pointing out that the current playground is not unsafe. 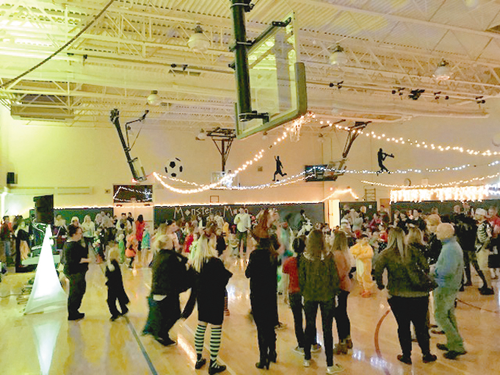