Town of Lewiston to act on 'modified' Rubino PUD at Nov. 13 meeting

Sat, Oct 28th 2017 07:00 am
Latest plan includes offer for recreational area, sidewalks on Bronson Drive
By Terry Duffy
Editor-in-Chief
Facing continued opposition by town residents, the Lewiston Town Board Monday opted to hold up its approval, yet again, on the concept plan for the Rubino brothers' 107-unit planned unit development on Upper Mountain Road near Bronson Drive.
Rather, the board moved to set a public hearing for 6 p.m. Monday, Nov. 13, to consider a local law to modify the current Rubino PUD - one that is anticipated to feature what was described as an "amended" concept.
Joe and John Rubino who both spoke that night said they have been listening and made adjustments to their plans. Included was their offering of 4.79 acres of land on Bronson Drive just north of the Niagara Frontier Bible Church to either town or church interests to help resolve a town-church playground issue and safety concerns. Also discussed was a potential sidewalk created along Bronson to resolve pedestrian and bicycling safety concerns of residents.
"We feel strongly everyone will benefit from this additional recreational land," said John Rubino, who called it a "win-win." He suggested the town might want to modify this arrangement via a playground lease with the church, with certain conditions to serve all interests.
"I am confident many residents that will benefit from this style of living," he said.
Monday's session did include six speakers, including four from out of the Lewiston area who came out in favor of the Rubino PUD, the need for patio homes in Lewiston and the developer's quality building reputation in other areas. Town of Wilson Building Inspector Tracy McLaverty, a resident of Deveaux and a Lewiston property owner cited the need for patio housing and called the Rubino project "a benefit to the town as a whole."
However many attending that night felt differently, as a number of concerns by close to a dozen neighbors of the Sattlewood subdivision and nearby escarpment area were again presented.
Among them was Joe Dimino of Bronson Drive, who presented a petition bearing 100 signatures opposing the development to Town Supervisor Steve Broderick and Town Board members.
"This petition has been signed by more than 20 percent of the property owners of the (adjacent) area of the proposed change," said Dimino. "You've seen my concerns with the road; I've addressed safety concerns ... I've addressed 'the study' that was done. My concerns are genuine ... to this proposed road."
At issue are plans by the developer for 5-foot setbacks on either side of the planned access road on the west from Bronson Dive into the Rubino project. Alongside the road stand existing residences.
"This access point, it's a very important part of this new proposal ... and we've heard that it's just a concept. Well I have a concept ... it's no.
"You know the majority of residents are opposed to this," Dimino said has he presented the petitions to Broderick.
Other residents likewise came out against the plan, questioning the need for additional new builds in a sluggish Lewiston housing market; challenging the traffic studies as being not comprehensive; noting the potential of blasting on adjoining areas including the NYPA reservoir; and challenging the overall design of the project as being out of character with the adjoining neighborhood. 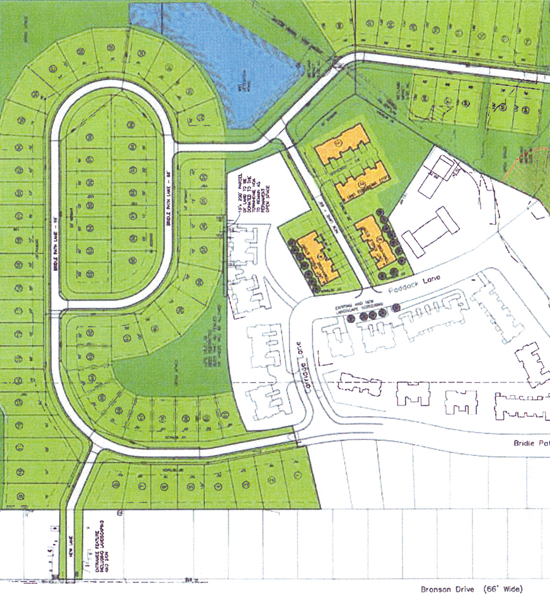 The town will hold a Nov. 13 public hearing to consider modifications to the Rubino brothers concept PUD on Upper Mountain Road near Bronson Drive.
Suggesting the Town Board had already made up its mind, one resident went so far as to remind the board that they are all sacrificial lambs and that residents would remember its decisions, come Election Day on Nov. 7
In response, the board went on to explain its stance with regard to the project.
"There were some comments (made here) that it was a 'done deal or not,' " said Town Board member Al Bax, referring to rumors in the area that a decision was in the making. The Town Board has been considering the Rubino brothers proposal since it was first presented at a Sept. 11 work session following Planning Board reviews.
"I'm not sure that this would characterize this board's attitude towards the project. I think that with the delays we have taken and the amount of consideration (that is) going out to the homeowners, walking the site and discussing everyone's concerns, I'd say we're taking this very seriously."
Bax noted that the Rubinos fulfilled all recent town requests with regards to financial information, traffic studies and their commitment to fulfilling the project, which he said the town is continuing to review.
However, he reiterated the town's response thus far "was not a done deal."
"I completely appreciate and also thank the residents for coming out here, week after week, restating their concerns and their genuine fear that the quality of life they enjoyed for so long could be threatened.
"We acknowledge that," said Bax, adding, "I don't think you can boil that process down that ... it's a done deal."
Broderick piped in, "I never said it was a done deal. I did research on it, I talked to our building inspector; this is an existing PUD."
"I think (that) through the process we've made this project better," said Bax, referring to the Rubinos' latest plan involving the green space improvements.
"We got the traffic study in; we've got the financial assurances back ... the SEQR has been done. My understanding with the town code is that we can take additional time to review these."
Bax suggested the town could consider Niagara River Greenway money to cover the latest plan for sidewalks and park enhancements bordering the church property.
"There is in my mind additional work to be done here," said Bax, suggesting that the new proposal would give the town additional time (31 days) to review the final conceptual plan.
A. Joseph Catalano, attorney for the town who is handling the Rubino project advised Broderick and attending board members (Beth Ceretto was absent) the town's 61-day timeframe was due Nov. 12.
"That is correct; however we received those items ... on the ninth of October; it would not give us our extension of 61 days," said Catalano. "What has occurred is that our 61 days are up on the 12th of November."
He added he had spoken to the Rubinos and that they are open to extending the period to accommodate the board's next meeting on Nov. 13.
Soon after the Town Board moved on setting the Nov. 13 public hearing to approve a local law that would accommodate modifications to the Rubino concept plan it is now reviewing. The measure went on to pass unanimously.
In other news from Monday's meeting:
•The Town Board opened with a public hearing to amend a local law to amend a zoning classification from "RR Districts: Rural Residential" to "Planned Unit Developments" for a portion of land owned by Niagara University. There were no comments heard and the measure went on to be tabled.
•The board approved $5,722.85 in funding for the purchase of two Jersey barriers with flashers to be located at the top and bottom of Indian Hill Road to address traffic problems.
•The board put on hold for now, plans for a dog shelter behind Town Hall. Town Engineer Robert Lannon reported that he had received only one bid and suggested revisiting the matter next spring. Discussions closed with the town said to look further into grant funding for the project.
Categories
NFP Sentinel Sentinel HP Feature List Top News