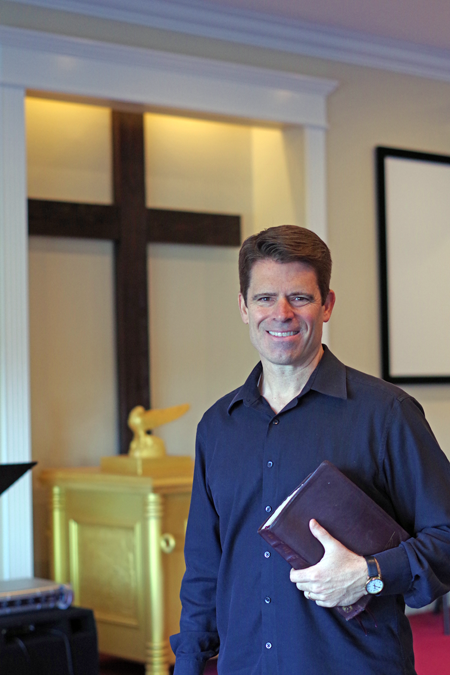 Sat, Oct 28th 2017 07:00 am
By Larry Austin
Island Dispatch Editor
Islanders are invited to celebrate the grand opening of a new church on Grand Island Boulevard.
CrossRiver Tabernacle, a nondenominational independent church at 2920 Grand Island Blvd., will mark its grand opening with a special service Sunday, Oct. 29, at 10 a.m.
The senior pastor of the church is Michael Chorey, a Grand Islander.
Sunday services are at 10 a.m. and 6:30 p.m. Wednesday prayer and Bible teaching is at 7 p.m. People can hear the message on the radio as well, with weekly radio broadcasts aired every Saturday night on WDCX.
The church had its genesis in a youth ministry called Joshua Revolution, which grew into a 5,000-youth conference.
"In 2004, I felt like God really spoke to my heart to begin a church," Chorey said. "Up to that point, all I had done was work with young people and teenagers, running this youth conference, and working with kids on the high school campus."
He was unsure about pastoring a church, "But I knew that God had called me to do it."
What started as a little storefront church on Third Street across from the Niagara Falls Convention Center grew into "A small church, but a very committed group of people," Chorey said.
The church grew and met each week at a hotel, but in 2015, one night after a prayer meeting, Chorey was returning home to the Island and "felt this strong impression in my heart that we were to move the church to Grand Island," he said.
An opportunity to buy land on the boulevard next to a office building developed. The church bought the land next door and then bought the whole building, giving them four acres to expand. A goal is to turn the undeveloped land next to the building into a fellowship hall and a school, a CrossRiver Academy, Chorey said.
The congregation of about 100 proceeded to make renovations and turned the 5,000-square-foot building into a sanctuary that can hold about 200 people.
The church is growing in manpower as well and now has a team of seven on staff, including a full-time youth pastor and worship leader in Charlie Ashker; and a children's pastor, Brian Rosman,  (a Grand Island High School graduate).
Members of the congregation come from all over the area, Chorey said.
Though the Island is considered a prosperous community, people are hurting everywhere.  Chorey said, and one mission of the church is helping people learn the power of the cross and how to be set free from sin's grip on their lives.
"We want to be there for those that are hurting, those that have needs," Chorey said. "We believe we're a family church, but we're a church for whoever, individuals as well as families."
Those who attend the grand opening will find an old-time religion experience, which Chorey said is reflected in Hebrews 13:8, which says, "Jesus Christ is the same yesterday, today and forever."
"We preach the cross. It's all about Jesus. ... We keep the emphasis on what Christ did on that cross for us, to save us, deliver us and heal us," Chorey said. "We're probably a little old-fashioned in that way."
Modern churches try to attract people with messages about personal prosperity, Chorey said, but CrossRiver believes "the greatest prosperity is of the soul and the soul that comes to know Christ and has that peace and that love and that joy in your life. That's what we want to see happening."
CrossRiver also emphasizes what Chorey said is the moving and the operation of the Holy Spirit.
Chorey added that CrossRiver Tabernacle is a community church. "It's not my church. It belongs to God, and we just want people to hear the Gospel of Jesus," Chorey said.
"I think the grand opening is the beginning of something very special that God's going to do on the Island," Chorey said. "We want to work with those other churches and be a part of offering the salvation message every week."

Members of the CrossRiver Tabernacle congregation are inviting Islanders to a grand opening at the church, 2920 Grand Island Blvd., on Sunday, Oct. 29, at 10 a.m.
Categories
Dispatch Dispatch feature NFP