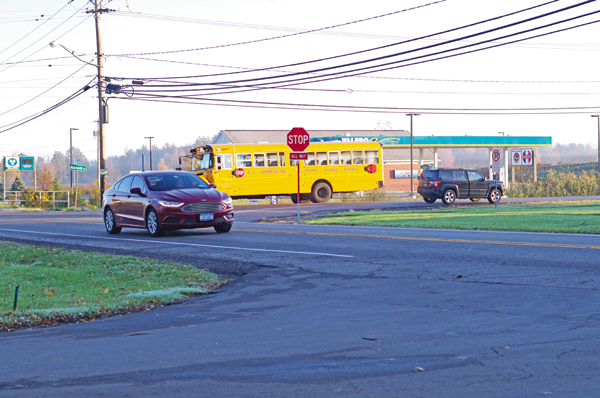 New stop signs have been installed at the intersection of Stony Point and Ransom roads. (Photo by Larry Austin)

Sat, Oct 28th 2017 07:00 am
By Larry Austin
Island Dispatch Editor
The agenda for Monday's joint meeting of the Grand Island Town Board and Grand Island Board of Education calls for discussion of the new traffic configuration at the intersection of Stony Point and Ransom Roads.
Earlier this month, the county added stop signs on Stony Point Road, making the intersection a three-way stop.
Town Supervisor Nathan McMurray, who called the intersection one of the worst on Grand Island, said on social media that he favored a stoplight or roundabout in negotiations with the county "until I saw the price tag."
"This is the third option. And after awhile if we see this doesn't work, we will rip the signs out go back to the drawing board," he said before the signs went up.
Thursday, McMurray said, "After conversations with the Grand Island superintendent of schools, buses and students have been on time. However, it's clear that some traffic has been pushed to other places, so we have to figure out what that means. But the worst thing we could've done was what was done for generations: to say 'Nothing can be done.' I'm not convinced yet whether this is a long-term solution or not, but I'll never settle for saying, 'There is nothing we can do.'"
Many residents have seen enough, however. So far, reaction to the new traffic configuration at the intersection has been negative, according to a poll on the issue posted to social media.
Three-quarters of respondents to an Island Dispatch poll on Twitter overwhelmingly think the intersection is worse off now than it was before.
Comments included:
•"People are running the light and beeping at people who actually stop! A traffic light would be safer."
•"People roll right through it and don't care. Definitely wouldn't call it an improvement."
•"Just take them out."
What do you think?
The results of the latest Island Dispatch Twitter poll are in.
With 278 votes cast and counting (the poll is still open) at the Island Dispatch's Twitter account (@NFPDispatch):
What do you think of the new 3-way stop signs at the intersection of Stony Point and Ransom roads?
With 165 votes cast:
What's the best answer for the intersection of Stony Point and Ransom roads?
Grand Island Town Board/Grand Island Central School District Board of Education
Joint Meeting Agenda
6:30 p.m., Monday, Oct. 30, 2017, at Town Hall Courtroom, 2255 Baseline Road
I. ROLL CALL
II. PLEDGE OF ALLEGIANCE
III. NEW ITEMS
A. 3-way stop at Stony Point and Ransom Road
B. Broadband and fiber project
C. Community service awards
IV. CONTINUING ITEMS
A. 485b update
B. School Resource Officer agreement
V. CLOSING COMMENTS
A. From the Town Board
B. From Dr. Graham
C. From Supervisor McMurray
Categories
Dispatch Dispatch feature NFP