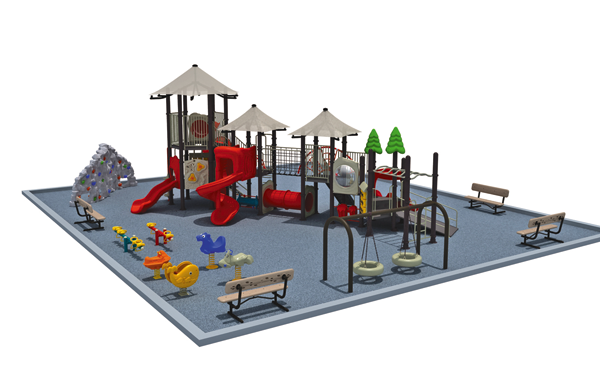 An artist's rendering of the proposed playground outside of St. Peter RC. School. (Image courtesy of St. Peter's)

by jmaloni
Sat, Oct 14th 2017 07:00 am
By Joshua Maloni
Managing Editor
On Sunday, St. Peter's parishioners will celebrate the recent handicap-accessible additions built in between and inside the church and school. The Most Rev. Richard J. Malone, bishop of Buffalo, will celebrate a 10:30 a.m. Mass of thanksgiving and dedication.
At the same time, church members are preparing for a second major change on the North Sixth Street campus, which will include a renovated and expanded parking lot and a brand-new, open-air playground for students.
The Village of Lewiston Planning Commission received an update on the second phase of the church's construction plan during its monthly meeting on Tuesday.
Kristin Savard, president of Advanced Design Group, presented a proposal to consolidate a newly acquired parcel and existing grounds into one lot. Planning Board members unanimously approved a resolution allowing such action.
Savard presented the Planning Board with a similar plan last year. She was advised to return upon the church's acquisition of a second adjoining parcel.
"What we've done is we've taken the playground area exactly as it was originally proposed, and we've moved it over to where a house originally was," she said. "What that's done is it's allowed us to get a little more parking area, which is going to get us a few more parking spaces - and something a little more conducive to the flow that we have seen the parents and teachers really gravitate towards."
"When we're done with this process, everything between Center Street and Onondaga, and Sixth Street and Seventh Street will be all one parcel," she added.
Savard said the blacktop lot would be resurfaced and restriped.
Planning Board Chairman Norm Machelor asked, "Is this going to help pick up the issue of cars parking along Onondaga (waiting to drop off or receive students)?"
"It's going to create more queuing, and more parking spaces," Savard replied. "I think there is some plan to tweak the pickup process to improve that situation."
She said available parking spaces would increase from 42 to between 55 and 57.
The playground, Savard explained, will be fenced-in, and include green space on North Seventh and Onondaga streets. Students will have easy access to the play area from the existing gymnasium. 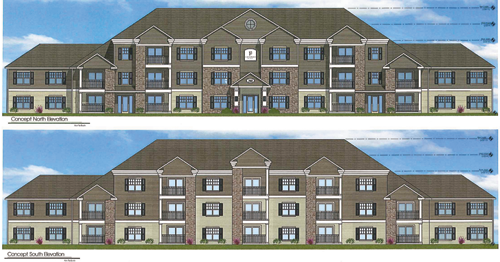 Pictured is an artist's rendering of the Onondaga Street complex (front side and back) proposed to be part of a development project at 765 Fairchild Place. (Rendering by Sutton Architecture PLLC, courtesy of the Village of Lewiston).
Fairchild Update
The Planning Board approved exterior changes to the residential redevelopment project at 765 Fairchild Place. Members voted to approve a new roofline and a dark brown/chocolate over light brown/tan color scheme for the 23-unit, three-story Onondaga Street-facing multifamily apartment complex (shown above).
"The issue before us is last time we told them (developer James Jerge and architect David Sutton of Sutton Architecture PLLC) no flat roof ... put a peak on it. They said, 'OK,' " Machelor said.
Neither Jerge nor Sutton was in attendance.
The six-unit townhome development on Fairchild Place is proposed to have the same coloring and a similar roof pitch design.
Sunday Service of Celebration
By Laura Balcom
The Most Rev. Richard J. Malone, bishop of Buffalo, will celebrate a Mass of thanksgiving and dedication of the recently completed renovations to St. Peter R.C. Church and School in Lewiston at 10:30 a.m. Sunday, Oct. 15. A catered reception will follow in the school gym and cafeteria, 620 Center St. All are welcome to attend.
The renovations include the installation of a new elevator and side entrance, the addition of two more classrooms, a new kitchen, a state-of-the-art media center and library, and handicapped-accessible bathrooms. These changes make both St. Peter's church and school handicapped-accessible.
This work is a result of the success of "The Campaign for St. Peter," which raised more than $2.3 million for the project ($757,000 was raised to support the Diocese of Buffalo's "Upon This Rock" campaign).
Both Malone and St. Peter's Rev. Monsignor David G. LiPuma would like to extend their appreciation and gratitude to the parishioners and community for their generous support of the campaign.
"I am just so deeply grateful to all of the parishioners and friends of our parish who have made the addition of our new side entrance and elevator a reality, along with the renovations in our school and church," LiPuma said. "Truly, our school is a school of excellence, and a loving and safe place to form and educate the children entrusted to our care. We are blessed to have such a supportive and generous community."
St. Peter School Principal Maureen Ingham added, "As we open new classrooms, furnish existing rooms, christen a new, state-of-the-art media center, and continue to grow our school, we are most grateful to all. We thank them each day in prayer for believing in us."
During the celebration, the new media center and library will be dedicated to now-retired St. Peter's teacher Sandy Jordan. A teacher at St. Peter's for 40 years, Jordan played an instrumental role as the school's librarian and technology director. Beyond that, she also handled bussing and transportation scheduling, and was always available to lend a helping hand wherever needed. During her time at the school, she met students every morning with her trademark greeting: "Good morning, all you wonderful children."
There will also be a catered reception directly after the celebration, which is open to the public. Parishioners and community members will have an opportunity to tour the school and see the upgrades. 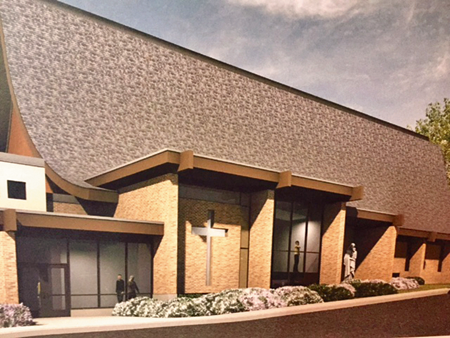