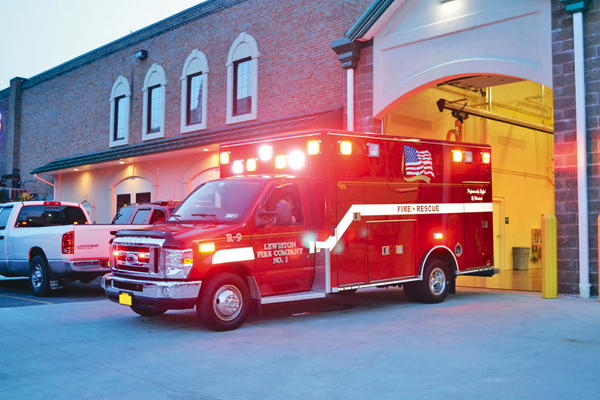 Sat, Oct 7th 2017 07:00 am
Lewiston No. 1 announces upgrades in equipment, EMS capabilities
By Terry Duffy
Editor-in-Chief
Lewiston fire crews are credited with staging a quick response to a structure fire in the village late last month. The Sept. 29 call on the 400 block of Plain Street involved a garage structure fire, fully engulfed in a historical section on the village's west side - an area of well-maintained residences, the nearby Lewiston Historical Museum and numerous businesses around the block on the Center Street strip.
Thanks to the efforts of Lewiston No. 1 Fire Co., joined by response crews from Upper Mountain Fire Co., the fire was quickly extinguished and a historical community property was saved.
"We had a structure fire last week ... it was a really good save to the house," Lewiston No. 1 President Matthew Grainge said.
"It was a quick response," added Lewiston No. 1 Chief Les Myers, who also serves as chairman of the Town of Lewiston Bureau of Fire Prevention. "And (we were) able to save one of the oldest homes in the Village of Lewiston."
Response-wise, Lewiston No. 1 was the leadoff company on scene, sending in its first engine with seven members, Myers said.
"We had three of our engines and one from Upper Mountain, mutual aid and both ambulances," he said.
Though seemingly impressive, both Grainge and Myers termed Lewiston No. 1's response to this call as "routine."
"When we hear the word 'fire,' it makes all of us jump. This one came in from the dispatch. ... You had that inkling that there was something happening with this house," Myers said. "It wasn't a report of smoke in the area of a possible fire. It was a fire."
Here, fire company responders had much to consider. It was a late-evening fire call in a residential district of occupied historical homes. The address in question was a home of 100-plus years.
"It was a quick response by initial crews, a quick knockdown, and (we) minimized damage to the house," Myers said.
"That's like the oldest section of our village," he added.
Grainge said, "They had the fire knocked down with the first engine. The first engine, the first response ... it went well."
Lewiston No. 1 sent 15 responders to that call, plus a crew from Upper Mountain. Such cooperation has become the norm for Lewiston-area fire responders.
"We work good with them and all our neighbors, and Youngstown and Ransomville, even Pekin," Myers said. "We abut territories on Lower Mountain and Dickersonville Road there, have gone both ways to help them, on reservation/grass fires. And they have come down here to help us ... with traffic control, and manpower for our side of the escarpment for grass fires and other issues.
"That's the trend in the fire services."
Of Plain Street and the Lewiston No. 1/Upper Mountain call, "We were able to save a very old home in our village," Myers said.
The fire company said that's the type of service Lewiston residents have come to value from Lewiston No. 1's 60 fire company responders, and from all fire companies serving the community.
Grainge and Myers went on to report a new, expanded service for the northern Niagara community. Lewiston No. 1 is currently in the midst of a significant upgrade in its emergency medical services - namely the level of care capabilities provided by the fire company's two ambulances.
In the past, Lewiston No. 1 crews operated at the EMT-Basic level - and augmented that service by relying heavily on advanced life support assistance from neighboring companies, namely Upper Mountain. Grainge and Myers said that, with a number of Lewiston No. 1's EMS members advancing their certifications to advanced levels, the company is now able to provide many of those services directly to the community from its in-house staff.
"Lewiston 1 is now certified to operate on the Advanced EMT level," Grainge said.
He reported that, as part of upgrades, Lewiston No. 1 replaced its cardiac monitors, acquiring two new LIFEPAK 15 monitors/AEDs to assist in patient care and cardiac response.
Grainge said the new monitors, acquired through cash donations received from the community, will help Lewiston No. 1's EMTs provide the best possible care in cardiac emergencies along with expanded patient assessment capabilities.
"One of the key features is comprehensive EKG (heart monitoring) and transmission (of this information) to the hospital" in a cardiac response. This allows for the patient to receive (a hospital's) interpretation of the potential cardiac event and transport to the most appropriate facility," Grainge said.
"It helps us to better serve the community," he said of Lewiston No. 1's 17 current basic EMT and four advanced life support certified personnel.
"It is very exciting to see the changes ... in EMS service," Grainge said. "We are so grateful for the continuing community support during our annual fundraisers, which allowed for these purchases. It is only right that purchases from these funds be used for equipment that will directly help our citizens at their time of need."
With that, Grainge put out an invitation to the community to partake in Lewiston No. 1's upcoming fundraiser - its fourth annual wine tasting and food pairing. The event will be held from 6-9 p.m. Saturday, Nov. 3, at the fire company's North Sixth Street banquet hall.
The popular community event will feature offerings from four Niagara Wine Trail wineries, a specially brewed craft beer from The Brickyard Brewing Company, food pairings by JCI Catering coupled with dessert offerings from the Village Bake Shoppe, an evening of jazz by Lewiston Music, vendors (including Becker Farms and LynOaken Farms), and a silent auction with proceeds going toward Lewiston No. 1's enhanced medical services.
"I would like to personally invite our community out and support Lewiston No. 1, while sampling some great wines, beers and food," Grainge said.
Tickets are priced at $25 presale or $30 at the door the night of the event. They are now available at Lewiston No. 1, the Niagara River Region Chamber of Commerce and The Orange Cat Coffee Company.
For more information on the event, call Lewiston No. 1 at 716-754-4487, ext. 211. 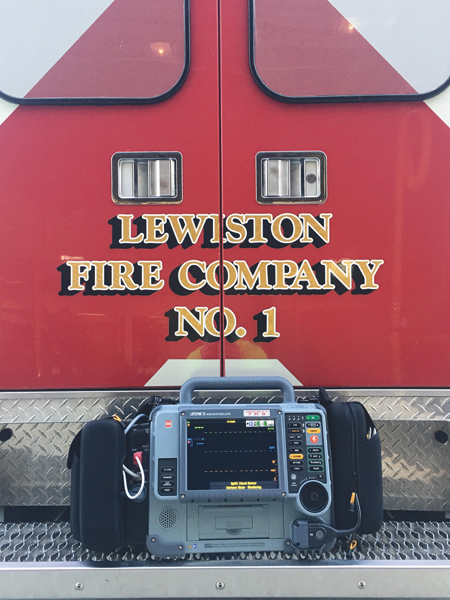