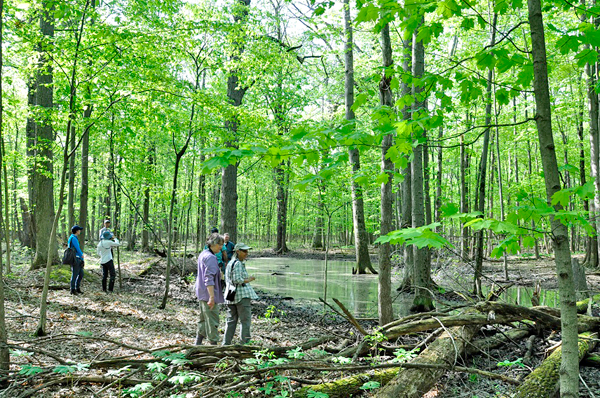 Visitors to a 140-acre parcel of forested land near Assumption Cemetery on Whitehaven Road view the property and its vast wetlands and forest landscapes. Funding committed by the Niagara River Greenway Ecological Standing Committee and the Gallogly Family Foundation will allow purchase of the property by the Western New York Land Conservancy.

Sat, Sep 23rd 2017 07:00 am
The Western New York Land Conservancy and residents of Grand Island hope to create a new 140-acre forested nature preserve in the heart of the Niagara River.
That dream came closer to reality this month when funding was committed by the Niagara River Greenway Ecological Standing Committee and the Gallogly Family Foundation, totaling more than $700,000. This funding will be just enough for the Land Conservancy to purchase the property and open it to the public. The Land Conservancy is hoping to raise at least another $600,000 to create an improved walking trail system, restore wildlife habitat, and maintain the preserve in the long run.
"We have been very happy to work with the Land Conservancy to preserve this beautiful forest, which cleans our air and water and keeps us healthy," said Grand Island Supervisor Nate McMurray. "The preserve is right next door to the Nike Base Park and will give people access to another beautiful green space in Western New York. Now it will always be there for future generations to enjoy."
The 140-acre forest surrounds Assumption Cemetery on Whitehaven Road. It is currently owned by Catholic Cemeteries of the Roman Catholic Diocese of Buffalo. Catholic Cemeteries would like Assumption Cemetery to remain shielded from surrounding development, and have offered to sell the surrounding 140-acre forest to the Land Conservancy to help ensure that buffer exists far into the future.
"In his encyclical, Pope Francis calls on the church and the world to acknowledge the urgency of our environmental challenges and to join him in embarking on a new path. We are working with the Land Conservancy to do just that," said Carmen Colao, director of Catholic Cemeteries of the Diocese of Buffalo. "This project will help ensure that the Assumption Cemetery is forever located in a peaceful and tranquil setting, surrounding by a vast and inspiring forest."
The Western New York Land Conservancy is a regional, not-for-profit land trust that permanently protects land with significant conservation value in Western New York for future generations.
According to the Land Conservancy, the property is one of the largest, undeveloped, privately owned properties left on Grand Island and one of the largest remaining forests in the entire Niagara River watershed. The property includes almost a mile of Little Six Mile Creek, a tributary of the Niagara River. The forest's landscape was carved by the last glaciers and massive pre-historic floods, leaving behind vast wooded wetlands reminiscent of cypress forests in the bayous of the Southeast. In fact, the combination of oaks and hickories is more typical of forest further south of New York state, and represents what may be a newly described plant community. This sprawling forest is also teeming with life. Passing migratory songbirds rest on the limbs of tall trees, while blue-spotted salamanders make their home on the forest floor below.
The initial concept to protect the upper watershed of Big Six Mile Creek and the surrounding mature oak forest started as a grassroots effort led by several Grand Islanders. Initially, Paul Leuchner, a retired government biologist and one of the original members of the Niagara River Greenway Commission put together a marketing presentation advancing the notion that all of the greenspace around the Assumption Cemetery should be preserved. With the commitment of Sister Sharon Goodremote, the chair of the Care for Creation Committee of the Catholic Diocese of Buffalo, and the perseverance of the Western New York Land Conservancy, a proposal to acquire this unique parcel was crafted. Leuchner noted that "the protection and care of this property will enhance the biodiversity of Grand Island and the Niagara River while at the same time establishing a unique ecological setting that will continue to educate future generations about the importance of our natural environment."
"The Great Lakes Basin contains 84 percent of the surface freshwater of North America," said Land Conservancy Executive Director Nancy Smith. "This headwater forest is part of this much larger system, and protecting it will ensure that future generations can drink, swim, and fish from our Great Lakes."
In July, the Niagara River Greenway Ecological Standing Committee approved a grant of $568,000 to help protect the forest. Then, in early August, Land Conservancy received an additional $200,000 from the Gallogly Family Foundation to help create the new nature preserve. Once acquired, the preserve will be called the Margery Gallogly Nature Sanctuary.
"The preserve will be named after my grandmother, who is an avid birdwatcher" said Kasey DeLuke of the Gallogly Family Foundation, and one of the newest Land Conservancy board members. "We are honored to be able to protect this majestic forest in her honor and create a legacy of conservation. Now and far into the future, children will be able to come here with their families to connect to nature."
Once purchased and opened to the public, the new preserve will be a place where people of all ages can enjoy year-round recreation outdoors like hiking, snowshoeing and cross country skiing. Residents and visitors will be able to take a peaceful walk on nature trails, view colorful songbirds during migration, and witness the frenzy of salamanders and frogs as they emerge each spring.
The Land Conservancy hopes to raise the additional $600,000 needed by June of 2018.
According to Tim DePriest, chair of the Greenway Ecological Standing Committee, "This project is a significant step forward in the creation of the Niagara River Greenway as envisioned with a network of interconnected conservation areas that allow visitors to enjoy and explore the natural beauty of the river corridor. In this case, those who venture into the new forest preserve will experience an ecosystem that represents what the area looked like hundreds of years ago with towering oaks and hickories dominating the island landscape." 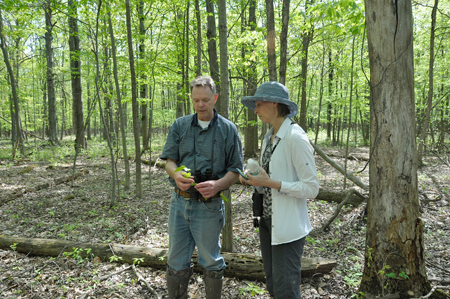