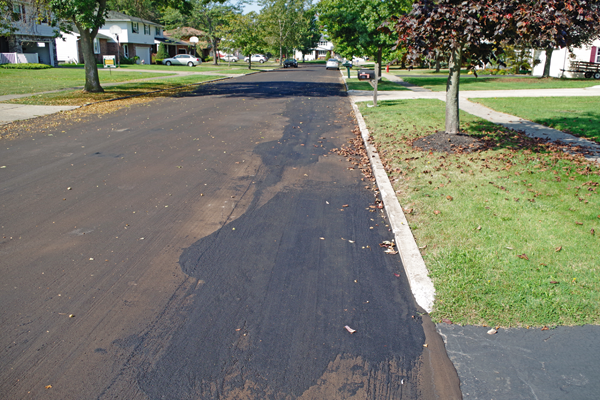 Residents of Fareway Lane, located off Baseline Road, south of Fix Road, attended Monday's Grand Island Town Board meeting to complain about the job a contractor did in micropaving their street. (Photo by Larry Austin)

Sat, Sep 23rd 2017 07:00 am
By Larry Austin
Island Dispatch Editor
Residents of Fareway Lane and Carter Creek Drive attended Monday's Grand Island Town Board meeting to complain about the poor quality of road resurfacing on their streets this month.
In response to a heavy volume of complaints directed at Town Hall, Town Supervisor Nathan McMurray said the Town Board has asked the town attorney to look at the vendor contract and see, if there is a breach, what remedies the town may have.
Deputy Highway Superintendent Dick Crawford, a candidate for highway superintendent, said Sept. 13 he spent much of that day walking the neighborhoods explaining the problem to affected residents. The vendor hired by the town for the job, Suit-Kote, ran into problems in its road repair process, called micropaving, a cheaper alternative surface treatment used to extend the life of a road.
"There was too much water in their mix and it didn't set up the way that it should've, so it was soft. They allowed drivers to drive on the roads," Crawford said.
Crawford said Suit-Kote would correct the mistake at no cost to the town.
"The vendor stands behind their product and is going to make it right," Crawford said.
Monday, however, residents told the Town Board they don't want any more of Suit-Kote's micropaving. McMurray said he agreed with residents and recommended the Highway Department stop the micropaving until problems are resolved.
"The micropaving technique, even when employed 100 percent successfully, leaves unacceptable results. It's gritty, grooved, rough, and that's just the nature of the product," Fareway Lane resident Don Keller told the board during the public comment section of the meeting. "We'd like to see our street repaved using traditional asphalt overlay that every other suburban community uses on residential side streets."
"I definitely understand the anger, the frustration" residents feel, McMurray said at the meeting.
Fareway Lane resident Glenn Bobeck said he and his neighbors don't want a short-term solution that doesn't solve the long-term problem.
"This is unacceptable. We're a better town than this. I understand that things cost money, but we should spend the money to assure that our town roads are top-notch. That's what they should be. That's the town we are," Bobeck said.
Dan Drexelius, a candidate against Crawford for highway superintendent, spoke at the meeting and said that as a contractor, he looked at the streets himself and said, "Lack of experience is what I saw in all phases of it. People putting material down sloppy. There's no supervision on the job for the town, is what I'm told by the neighbors."
Drexelius said it's the highway superintendent's job to supervise any and all roads in the town.
"It's your job to supervise subcontractors, and there's no supervision," he said. "I really think that this is the biggest problem with that whole job."
"I hope the contractor is held responsible by the town and I hope the supervision is held responsible."
Councilman Chris Aronica said he went to the road for a look. "We definitely need to hold the contractor responsible for this because it really is sloppy," Aronica said. "As far as micropaving and paving a road, that's a discussion that the board needs to have. It's going to cost the taxpayers more money to do it the other way, but I think if that's what the taxpayers want, we need to take a hard look at it."
Road repair season and election season overlapped at Town Hall Monday. The timing of the complaints, a week after the primary elections and eight weeks before the general election, made the paving problem a potential campaign issue.
"There's a little bit of that going on," Aronica said of politics, "but by far that contractor needs to be held responsible for that job that they did."
Carter Creek Drive is northeast of Fix Road in a neighborhood off Baseline Road. Fareway Lane is off Baseline Road southwest of Fix Road.
Categories
Dispatch Dispatch feature NFP