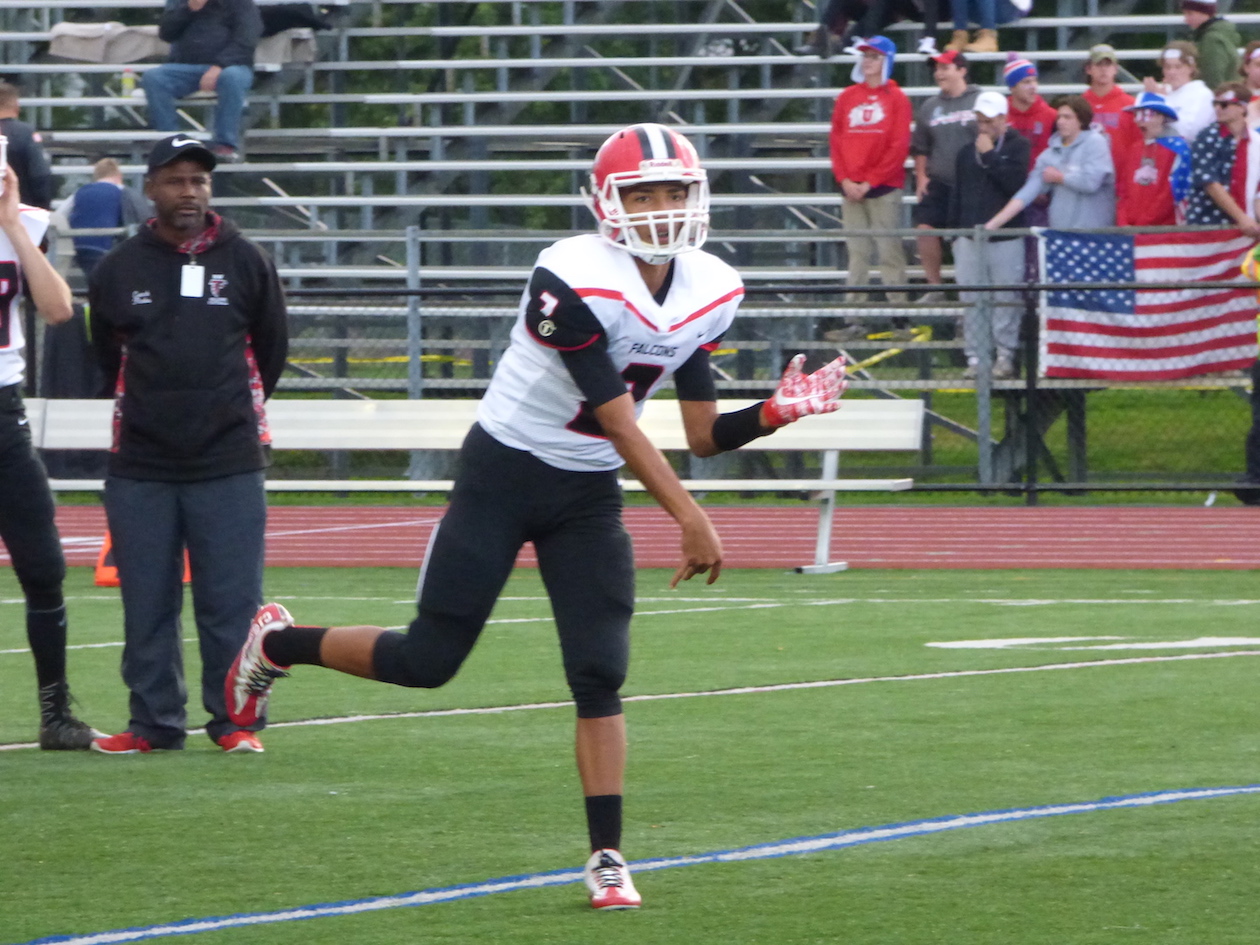 Sun, Sep 10th 2017 11:50 am
Falcons storm back after 28-point deficit
By David Yarger
Tribune Editor
In the preseason, Niagara-Wheatfield coach Russ Nixon said his team would fight until the final horn. Friday night against Orchard Park, they proved that, although in a losing effort.
The Falcons fell to Orchard Park, 46-30. Nixon's team, once down 36-8, stormed back to make it a 9-point game in the third quarter, but the Quakers ended up pulling away late.
N-W led after one quarter, as Nick Stott ran it in from four yards out. Josh Brown successfully ran for a two-point conversion and, after one quarter, the Falcons had an 8-7 lead.
In the second quarter, momentum turned to Orchard Park after they scored on fourth and goal from the one. Wheatfield held the Quakers offense three times on the goal line prior to the score. The Quakers went on to score the next 29 points.
"Football is a game of momentum, and if we're able to stop that goal-line stand, we've got the momentum," Nixon said. "We create a takeaway, there's no points on the board and we're going the other way. They were able to punch it in, and the second quarter we dug ourselves a hole and that was kind of the difference here."
The Falcons went into the locker room down 29-8 at halftime.
Wheatfield got the ball to start the half, but on the second play the offense fumbled and it was returned for a touchdown, making it 36-8.
N-W got back on the board after Brown reeled of a couple big runs and then finished it with a short TD run.
After an OP field goal, it was 39-14 heading into the fourth.
To start the fourth, the Falcons were at the 14-yard line. On the first play of the quarter, Jordan Parks ran it in to make it 39-22.
On the ensuing kickoff, the Falcons performed a squib kick that deflected off an Orchard Park player and rolled to the 25-yard line, only to be recovered by N-W. After three plays, Parks ran it in again from 14 yards and, after the two-point conversion, it was 39-30.
The Falcons bench was seen jumping up and down, as they were back into the game with a reasonable amount of time left.
As momentum began to turn Wheatfield's way, the defense faced a third down and two yards to go, which turned into third and seven from the 48 after a false start. Quakers quarterback Jack Sharp dropped back to pass and launched a deep pass to Tristan Lancaster. The Wheatfield cornerback covering turned around and just missed tipping the ball, and the pass was caught and ran in for 48-yard touchdown.
The play really sucked the air out of N-W's comeback hopes, as the final two Falcons' offensive possessions resulted in turnovers.
After giving up 88 points in two games, Nixon said the special teams unit needs to get better. Several kicks and punts have been returned for good field position by the opposing offenses.
"We gotta correct special teams. We can't let them start drives at our half of the field," Nixon said.
For the Falcons, the loss brings them to 1-1 on the young season.
Parks finished with 16 carries for 177 yards and two touchdowns. Brown added 16 carries for 90 yards and a touchdown.
The Falcons will face another tough opponent later this week in the Grand Island Vikings. The Vikings enter the contest 2-0 after defeating rival North Tonawanda on Friday night.
The matchup will be at Grand Island at 7 p.m. Friday.
Categories
Tribune Tribune HP Feature Picture