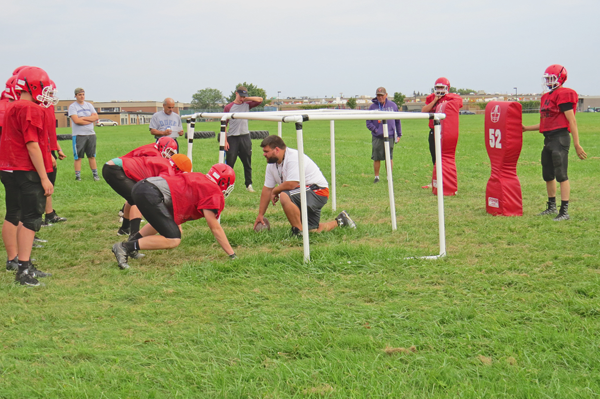 Niagara-Wheatfield football ready to compete in 2017

Fri, Sep 1st 2017 04:35 pm
Falcons returning athletic squad
By David Yarger
Tribune Editor
Every year in high school football, teams must adjust to losing graduating seniors. For the 2017 season, Niagara-Wheatfield coach Russell Nixon said he believes his returning players have made the transition go smoothly.
"We had a lot of seniors last year," Nixon said. "I think we lost seven starters on both sides of the ball. So, we've got a lot of underclassmen stepping up, but as a bright spot, too, they're getting a lot of reps and learning a lot. So, they're setting themselves up for the future to be a strong team."
The Falcons' are coming off a season in which they went 4-5, but finished the season with four straight victories.
Nixon said those wins have made his returners hopeful, but they need to be ready by the start of the season and avoid a slow start like last year.
"It definitely gave our underclassmen the confidence that they can win games and they can compete and be in games," he said. "We set a very physical tone with camp this year that we were going to be conditioned and be in game shape by week one, and not by week four, which has kind of been what's happening."
Nixon added the team has known what it's been capable of doing, but the Falcons have turned it on too late into the season and the team needs to hit the ground running from the start.
Returning for the Falcons' offense is junior quarterback Jordan Parks, who started six games behind center as a sophomore. Nixon said Parks brings a dual threat at quarterback, being able to make plays with his arm and his legs, and also has a good understanding of the offense.
Nixon made it clear the Falcons will be known for their running game.
"We've got these big boys out here at Niagara-Wheatfield and we're gonna just get behind those big bodies and move the other line and run the ball, control the clock and control what we want to do in the game," he said.
To get that push off the line, Nixon said he's looking toward three seniors to anchor the line in Justin Stickney, Jake Ambrosia and Bryan Lucinski.
Running behind those three, Nixon named Nick Stott and Jack DeWolf to take the bulk of carries.
"They've done a good job of hitting the holes and then using their athleticism to make plays once they get through the line," he said.
Every year, goals change for teams heading into the season and, for Nixon's squad, he said the team will be known for its physicality and heart.
"Our goal is to be competitive," he said. "Always leave it out on the field, and play a physically aggressive brand of football, where if we make a mistake, we're gonna make it at 110 percent. We're gonna pick ourselves up and get right back out there."
Nixon added, regardless of what the scoreboard says at the end of the day, the other team is gonna know it was in a very tough game.
The Falcons' opening game will be against a familiar foe, the Lockport Lions. N-W defeated the Lions twice last year during their four-game winning streak. The game will be at home at 2 p.m. Saturday.
Categories
Tribune Tribune HP Feature Picture