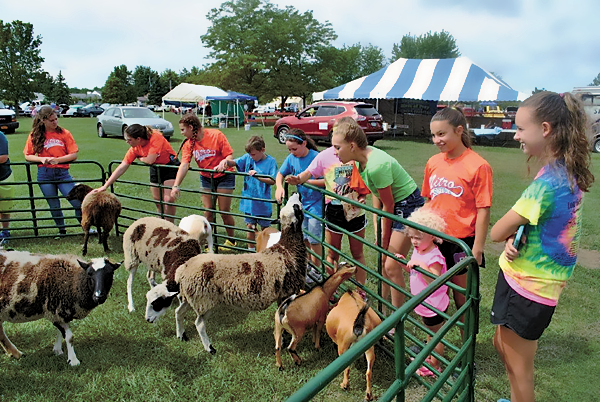 Youth enjoy meeting some of the animals at last year's picnic.

Fri, Aug 11th 2017 02:20 pm
By Isabella Casilio
The 39th annual Wheatfield Family Picnic will provide free entertainment, activities and affordable food for the whole family to enjoy on Sunday, Aug. 27, at Fairmount Park, 3185 Steig Road.
The day, organized by a committee of local volunteers, will begin with a flag-raising ceremony by American Legion Post No. 1451 at 10:45 a.m. There will be a blessing, introduction by committee chairman Michael Zarbo, and Wheatfield Town Supervisor Robert B. Cliffe will welcome all visitors. Two church services will follow, one Catholic and one Protestant, at 11 a.m. The picnic's food, activities, games and entertainment will run from noon to 5 p.m.
Niagara Alliance Church will provide a kid's carnival, including a dunk tank, games and face painting. The annual event will include activities, such as balloon animals, a beanbag toss, a bounce house, games and crafts.
A goldfish toss, petting zoo, pony rides, hayrides and rock-climbing wall will also be featured at the event.
Sky Hunters will bring its birds of prey, including hawks and owls, to educate visitors about the animals.
Featured throughout the day will be live music by Nathan Zarbo, blood pressure testing by Mount St. Mary's Hospital, and Red Cross disaster preparedness information. Representatives from the Historical Society of North German Settlements and Wild Kritters of Niagara County will also be on hand.
Other free events at the picnic include a Bergholz German Band (Bergholz Blaskapelle) performance from 12:30-1:30 p.m., pony rides from 1-4 p.m., Niagara County Sheriff's Office K-9 demonstration at 1:30 p.m., a magician performing on stage from 2-3 p.m., bingo from 2-4 p.m. and a basket raffle by the Wheatfield Nitros softball team at 4 p.m.
The Wheels of Wheatfield Classic Car Show will begin at 10 a.m. Trophies will be awarded at 4 p.m., and several different categories will be available. There is a fee of $10 per car entry. The first 50 entries will receive a magnetic dash plaque.
John Donner, who organizes the car show, has been part of the picnic for more than five years and has been a part of the car show for three years. He said the event gives people in Wheatfield an opportunity to show off their collective cars and win in different categories such as years, custom cars and trucks.
"It gives people a chance to come out and see each other," Donner said. "They can come out and have a good time and can make a day out of it."
Michael Zarbo said local organizations and businesses participate in the picnic because they see it as a sign of goodwill to the community.
Participating Wheatfield organizations include Cub Scout Pack No. 833, the Kiwanis Club of Niagara-Wheatfield, the Wheatfield Business Association and the Wheatfield Nitros.
"One of the things that's really important is the fact that this picnic is completely funded by the generosity of the local businesses and people," Zarbo said. "We are very fortunate that people throughout the years have experienced the picnic, enjoyed it, and because of that they give us donations."
Local businesses will also provide food and drinks for purchase throughout the event. Offered will be deep-fried Oreos by the Adams Fire Co.; chicken chowder from the Bergholz Fire Co.; coffee and Tim Bits from the Kiwanis Club of Niagara-Wheatfield; souvlaki pitas, gyro pitas, hamburgers, sausage and fries from the Meeting Place; kettle and caramel corn from Poppin-Hops; cinnamon almonds, popcorn and candy provided by the Nut Hut; steak and cheese and assorted subs from Viola's Subs; hot dogs from the Wheatfield Democratic Club; roast beef sandwiches and corn on the cob from the Wheatfield Republican Club; Chiavetta's chicken dinners from the Wheatfield Nitros softball teams; and pop and bottled water from Project Future.
Michael Zarbo, who was approached seven years ago to resurrect the event after several years of hiatus, said he took the position because he thought it was a worthy cause.
"When we resurrected the picnic our intention was to make it a fun family event and also very reasonable," Zarbo said.
He said the success of the event is attributed to the people who are a part of the Wheatfield Family Picnic committee, who do the vast majority of the work to organize the event.
He noted the committee has done a good job of letting the community know its intention is to provide an affordable event.
For more information, visit the Wheatfield Family Picnic at www.facebook.com/WFP.INFO.