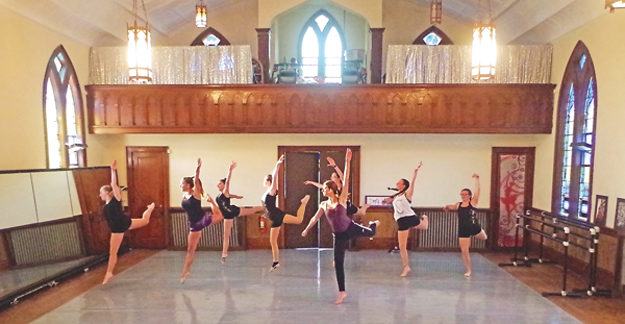 Miss Leah Jacobs, a senior at Hobart and William Smith College, teaches a modern dance class at Step-In-Time Studio of Dance, based in Trinity United Methodist Church. Jacobs was a student of Deby LeFevre at Step-In-Time when she was three years old. (Photos by Larry Austin)

Mon, Aug 7th 2017 04:30 pm
By Larry Austin
Island Dispatch Editor
Deby LeFevre said every day she thanks her lucky stars that she found a new home for her Grand Island dance school, Step-In-Time Studio of Dance. Moving to her new location, however, probably had more to do with divine providence than luck.
LeFevre has relocated her studio to one of the most historic and sacred addresses on the Island: 2100 Whitehaven Road in Historic Trinity United Methodist Church.
The coming together of Step-In-Time and Historic Trinity was providential, she explained.
LeFevre stopped by Historic Trinity one day to see about renting the church's gymnasium for her baton twirler classes. The gym has a high ceiling few locations on the Island can match, and LeFevre had 60 twirlers in need of space. Trinity's Don Mason, who LeFevre called her angel, happened to be cleaning the gymnasium at the time and casually mentioned to her that not only the gym was available, but much of the rest of the church was as well.
As she toured the old church with Mason, a Gospel verse from the Book of Matthew posted on a door stopped her dead in her tracks. Jesus said: "Ask and it will be given to you; seek and you will find; knock and the door will be opened to you."
Even the verse, from Matthew 7:7, was a sign to LeFevre telling her that moving her business to Historic Trinity was meant to be her final move.
"I've moved seven times. This is my 38th year, and this is it. ... This is home. This feels like something I've been waiting for forever," she said.
The moment brought tears to her eyes, she said.
"Isn't that the coolest thing? I get goose bumps every time I think about it," LeFevre said of the sign.
Step-In-Time moved to Historic Trinity in February and since then LeFevre said everything has been a blessing for her studio, her former landlord and Trinity UMC.
"This move was a win-win-win situation for all involved," LeFevre explained. "By moving out of my last location, it allowed the owners of the building to move forward with their project. It is supporting Trinity UMC with the continued use and care of Historic Trinity, and Step-In-Time now has the most inspirational, beautiful setting imaginable to call our dance home."
LeFevre noted that dance studios have always made the best of found spaces. She told her students one studio she visited in New York City even has old church pews, just like at the new Step-In-Time. To the dancer, a stage is a stage.
"They use whatever space they can for studios, so this is just basically like a dance studio in New York City," LeFevre said. "That's what I tell them."
Her old studio location had a specially built dance floor made for her, and she was able to bring it to the new home.
"We're blessed not only to have the church, but there is earth beneath us," she said. "So we are on a spring floor."
Upon moving, LeFevre discovered the old floor from her former studio is the same length as the space in the Trinity sanctuary and fits perfectly as if a carpenter knew she was coming and made the space just for her. "It looks like it's just been waiting for us," she said. "Isn't it amazing?"
The new location inspires her adult teachers, who are certified by test to teach through Dance Educators of America and The Cecchetti Council of America Teachers exam.
"Many of our staff are college dance majors and graduates and all have a lifelong passion for the arts and love working with children," LeFevre said.
Registration is ongoing through August for students. An open house is held every Wednesday from 5 to 7 p.m. LeFevre said the studio has approximately 60 baton twirlers and 150 students. Though the address is new, the phone number to call Step-In-Time is still 716-773-1881.
Now that Trinity provides more space, LeFevre is embarking on a new program, one she's always wanted to offer. To help remove the barriers that have prevented some kids from having the opportunity to dance - such as cost, available transportation, or a lack of experience - Step-In-Time has developed a free program called "A Chance to Dance" for students at Veronica Connor Middle School. Transportation will be available from the school to the dance studio, however participants are responsible for their own ride home. Applications will be available in September from VCMS physical education teachers or at the dance studio.
No dance experience is needed and space is limited.
For those new students as well as all the students in Step-In-Time dance classes, the students will hear a message the Trinity congregation has heard within those same walls for over 100 years.
"We tell the kids that they don't have any limitations," LeFevre said.