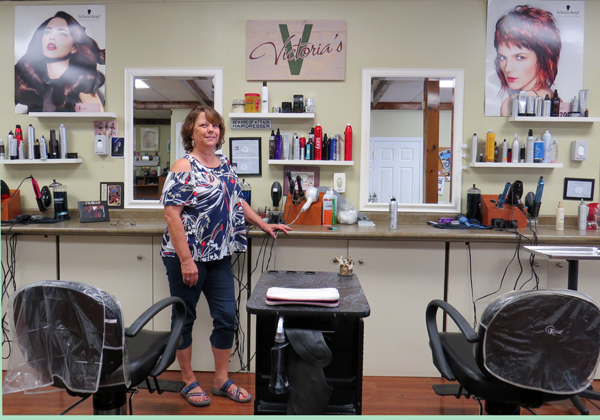 Mon, Aug 7th 2017 02:20 pm
By Malika-Budur Kalila
It's been 20 years since Victoria Quarantillo established her hair care business in the Village of Youngstown. Running Victoria's Hair Salon has been a long journey for her, but one in which she's gained "awesome friends and growth," Quarantillo said. Nowadays, Victoria calls her salon a "second home."
The salon provides hair services for all types, and for all family members.
"Our job is not only to make you look good, but also to take care of your hair," Quarantillo said.
She explained that all products used in her salon are expensive to purchase, but her goal is to use "nothing but the best" for clients. Quarantillo said she focuses on quality over reduced costs.
High-priced products do not affect the price of the services at Victoria's Hair Salon. Quarantillo utilizes "hometown prices," so that everyone can afford her services.
"I will never get rich, but I am happy," she said.
Quarantillo said nothing makes feel better than confident and satisfied customers.
As with every business, challenges occur in the hairstyling field, too.
"Finding stylists in the small town is difficult," Quarantillo said. It is important for her to have friendly and up-to-date stylists.
As she stated, Quarantillo's salon has became her second home. One of the reasons is that her daughter, Paula, has been working with her as a stylist for 19 years.
"My daughter is my second hand and partner in crime," Quarantillo said while looking at Paula.
Talking about her job, Quarantillo said, "I love people and making them happy," and this is one of the reasons why she chose her career. Another reason is that, 20 years ago, she could not afford haircuts for her four children. Quarantillo learned how to cut hair and obtained her own license.
Today, she said her main aim is to help people.
For instance, for her 20-year anniversary Quarantillo did not hold a celebration, but, rather, she came up with another idea to highlight the date.
"I am not an attention-getter. ... For the anniversary, I did have 20 percent off of all products for the whole month," she said.
Quarantillo said serving the people of Youngstown is her ultimate goal.
"I was raised here, and raised all my kids here," she said.
Although she was offered opportunities to open branches in Niagara Falls, she was not interested in doing so.
"If I was in places such as Lewiston it would be different. I would have to compete, and I do not want that," Quarantillo said. "I want to expand my services, not branches."
Victoria's Hair Salon is located at 354 Main St., in the Village of Youngstown. For more information, or to make an appointment, call 716-745-3209.
Categories
NFP Sentinel Sentinel HP Feature Picture