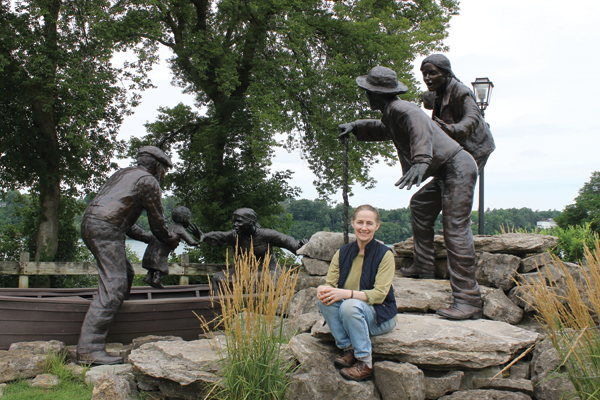 Sculptor Susan Geissler sits amid the figures of her Freedom Crossing Monument in Lewiston. She has been commissioned to sculpt the statue of World War II hero Charles N. DeGlopper that will be installed in the Grand Island park bearing his name. DeGlopper was killed in action in the battle of Normandy.

Sat, Aug 5th 2017 07:00 am
Story and photos by Karen Carr Keefe
Youngstown sculptor Susan Geissler has received a new commission of great significance for Grand Island. She has been chosen to create the statue of Medal of Honor recipient Pfc. Charles N. DeGlopper, a World War II hero from Grand Island.
The statue will be installed in the center of the DeGlopper Memorial, at the intersection of Grand Island Boulevard and Baseline Road. In June 2016, on the 72nd anniversary of DeGlopper's death, members of the DeGlopper Memorial Expansion Committee held a ceremonial groundbreaking to launch an estimated $750,000 expansion of the original parkland to include land that was once a gas station.
The expansion committee includes members of the Pfc. Charles N. DeGlopper Memorial Veterans of Foreign Wars Post No. 9249, Grand Island American Legion Post No. 1346, and Grand Island Moose Lodge No. 180. Their project is to honor DeGlopper, the other 13 Island soldiers killed in action, as well as servicemen and women from the community who have served their country.
Turning Points in History
DeGlopper, a member of the Glider Infantry Regiment of the 82nd Airborne Division, was killed in battle June 9, 1944, during the D-Day invasion. He died as he drew enemy fire away from his battalion by firing his automatic rifle at the German soldiers. His courageous act of self-sacrifice saved the lives of his fellow soldiers and is considered a critical point in the Battle of Normandy.
Geissler is no stranger to sculpting scenes that capture turning points in history. Her Tuscarora Heroes Monument commemorates "the gallantry of a vastly outnumbered band of Tuscarora men" who came to the defense of American white settlers, delaying a British attack on Lewiston during the War of 1812.
The sculptor's Freedom Crossing monument honors Lewiston's Underground Railroad participants who helped slaves escape to freedom across the Niagara River to Canada.
Unbeknownst to Geissler, Buffalo artist Ralph Sirianni had recommended her for the commission to make the DeGlopper statue.
Independently, Geissler and her husband, Peter Henderson, who handles the business side of the artistic work, had read about the DeGlopper Memorial expansion groundbreaking and dedication last June, and they decided to attend and find out who was involved in the project.
At the dedication, Henderson said he went over to Sirianni. "I said to Ralph, 'Do you know who the sculptor's going to be on this?' and he said, 'Yes, Susan Geissler.' That was the first we heard about it," Henderson said.
At the dedication, they met Ray DeGlopper, and his wife, Anita, who is also an artist. "She recognized Susan's talent right away," Henderson said. "They're wonderful people."
"We offered for everyone at that unveiling to come to the studio and take a tour if they wanted to."
Charles DeGlopper's nephew, Ray DeGlopper said the choice of Geissler to do the statue was easy, "if you see some of the things that she's done, like in Lewiston." He, his wife, Anita, and Memorial Committee Chairman Erik Anderson took Geissler up on her offer of a tour of her Tuscarora Heroes and Freedom Crossing monuments, and they were favorably impressed.
DeGlopper was also at the dedication of Geissler's sculpture of World War II hero and Buffalonian Wade McClusky at the Buffalo and Erie County Naval & Military Park, where the finished statue will eventually be on permanent display.
"We were down there for the unveiling. It wasn't the finished project. Wade McClusky's son was there, and the likeness of him, to his father and to this monument ... that's why Susan (was chosen). Might be a little more expensive, but I think it's the right choice.
Chris Taylor of the DeGlopper Memorial Expansion Committee said the decision to choose her was made official at the committee's July 13 meeting. But the DeGlopper family's input was the primary factor, he said.
Grand Island Supervisor Nathan McMurray applauded the choice of Geissler as the sculptor.
"I've been lucky enough to travel a lot, and the most successful war monuments are not glorifications of war," but rather "a remembrance of the sacrifice of war and the solemnity of war. I'm very glad they chose Susan Geissler," he said. "Her Tuscarora Heroes monument is fantastic, and her Lewiston Crossing monument - I've taken a lot of out-of-town guests to go visit it. So I was very, very grateful they chose her to do this." 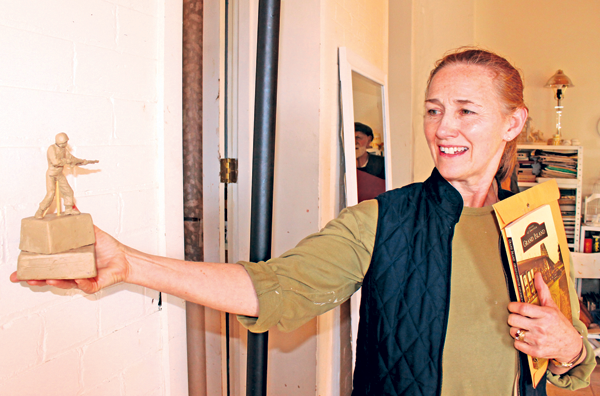 Ray DeGlopper stands in DeGlopper Memorial Park beside the monument that bears the names of Grand Island servicemen who have been killed in action during U.S. wars. At the top of the list of World War II casualties are the names of two of his uncles, Medal of Honor recipient Charles N. DeGlopper, for whom the park is named, and Eugene F. Dinsmore. Fundraising is underway to expand the park and install a statue of Charles DeGlopper that will be sculpted by Susan Geissler of Youngstown.
Categories
Dispatch Dispatch feature Home feature NFP Our Fave Photo Sentinel Sentinel feature