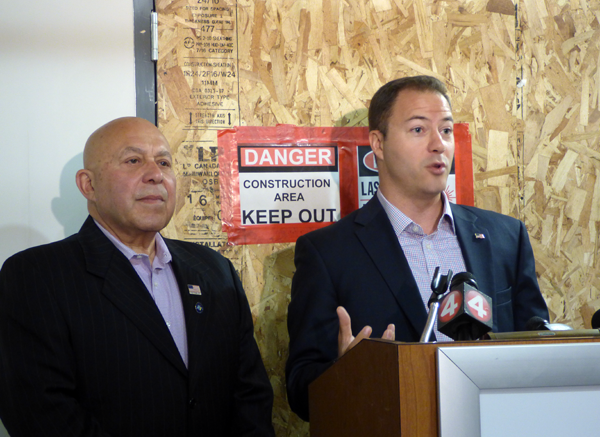 Tue, Aug 1st 2017 04:55 pm
Funding supports infrastructure projects at NFMMC, DeGraff & Mount St. Mary's hospitals
Ortt joined by Morinello at press conference
New York State Sen. Rob Ortt on Tuesday announced he secured a total of $1 million for infrastructure projects at three local hospitals. He said the funding will serve as a catalyst for economic growth and job creation. It secured by Ortt as part of the 2017-18 state budget, and supports projects at Niagara Falls Memorial Medical Center, DeGraff Memorial Hospital in North Tonawanda and Mount St. Mary's Hospital in Lewiston.
Ortt said, "These economic development funds will offer local hospitals the opportunity to build on their current success by expanding, upgrading, and improving operations and increasing efficiencies. By investing in these major projects, we are helping to generate new economic opportunities that create jobs, and stimulate and strengthen the surrounding communities throughout Niagara County."
VIDEO:
Niagara Falls Memorial Medical Center was awarded $400,000 for its new inpatient Cardiac and Stroke Center. The 12,950-square-foot facility will replace the hospital's 40-year-old telemetry unit. The center will feature 25 private rooms equipped with state-of-the-art technology. The $4.3 million project will include a family and patient resource room and medical teaching facilities.
The project will also feature a new inpatient rehabilitation center that will make it more convenient to begin physical therapy and occupational therapy while still in the hospital, thus contributing to more positive long-term patient outcomes.
Since the start of construction last October, the project has created 15 construction jobs. The new facility is scheduled to open this November.
Niagara Falls Memorial Medical Center President and CEO Joseph A. Ruffolo said, "We are most grateful to Sen. Ortt for his enthusiastic support of Niagara Falls Memorial Medical Center and for his efforts in securing this funding for our new Cardiac and Stroke Care center. This multidisciplinary 25-bed center will feature the latest in 'smart' technology and will - combined with our recently expanded Heart Center of Niagara - further establish Memorial as Niagara's leading provider of outstanding high-quality care to patients with cardiovascular disease."
DeGraff Memorial Hospital will use a $300,000 grant for a portion of the cost of renovation and expansion to transform its emergency department. In order to accommodate the growing patient needs that resulted in 12,505 emergency visits in 2015, DeGraff needed to expand its ER. The department will move to the hospital's east side, and the new space will more than double the existing square footage.
The new, 10,264-square-foot facility will include 17 treatment bays with high-tech equipment and energy efficiencies, trauma, bariatric and airborne isolation rooms, as well as a decontamination area for infectious threats. An additional 3,075-square-foot-space will include a new main lobby and patient registration area. The building's exterior will have a modern, updated façade, with improved signage to facilitate traffic flow.
As a result of the $7.8 million project, DeGraff will create approximately 125 construction jobs. The new ER is expected to open in 2018.
"As we look to the future of DeGraff Memorial Hospital, these resources will help us continue to provide the highest quality services for the people of the Tonawandas. The goal of the expansion is to serve the community better by increasing DeGraff's capacity to treat patients experiencing illness and life-threatening emergencies," said Darcy Craven, the president of DeGraff Memorial and Millard Fillmore Suburban Hospitals. "We want to thank Sen. Ortt for his continued support of Kaleida Health's DeGraff Memorial Hospital emergency room expansion and renovation project. This much-needed economic development project will significantly improve the health and well-being of Niagara and Erie County residents."
Mount St. Mary's Hospital will use a grant of $300,000 to upgrade its electrical distribution system in the main building, which was originally constructed in 1965. Replacing the antiquated system will improve safeguards on the campus and better protect both patients and visitors. Upgrades include new transformers, main breakers, a generator housing structure, and seven new transfer switches with monitoring systems.
An estimate of 30 construction jobs over the next several months will be created for this project.
"The funds we receive are being targeted to an important upgrade in our electrical distribution system," said Gary C. Tucker, president and CEO of Mount St. Mary's Hospital. "We will invest nearly $5 million overall in the project, because of its importance in enhancing patient care and safety. The money from the state will significantly help us fully implement the project."
The funds are being administered by the Dormitory Authority of the State of New York (DASNY).
At a press conference on Tuesday, Ortt mentioned his displeasure in Gov. Andrew Cuomo's recent cancellation of a meeting with Seneca Nation of Indians leadership.
In a statement released Monday, Ortt and Assemblyman Angelo J. Morinello said, "While we understand the urgency of the state's transit emergency in New York City, there's another major state-generated crisis here in Western New York. We respectfully urge the governor to prioritize compact negotiations with the Seneca Nation of Indians. Without critical revenue sharing proceeds, community nonprofits and local governments will continue to see dramatic cuts to education, health care and public protection."
Click HERE to download and read the letter from Seneca Nation President Todd Gates.
Categories
Around WNY Home feature NFP Our Favorite Sentinel Top Around WNY Feature Tribune