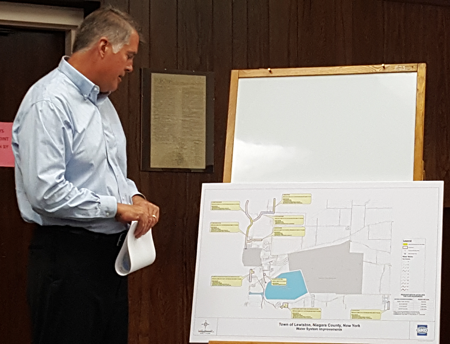 Sat, Jul 29th 2017 10:00 am
Fire official supports water line improvements
By Terry Duffy
Editor-in-Chief
Monday's Lewiston Town Board public hearing on establishment of a single town water district en route to a proposed $10.3 million townwide waterline improvement project saw a mere two comments offered by residents, and two board members absent.
With that, Supervisor Steve Broderick and attending board members Bill Geiben and Rob Morreale opted to close the hearing and table any further action on both measures until next month.
The hearing itself did provide some details on the need for the actual waterline replacements throughout parts of Lewiston - a project forecasted to cost typical households of a one- or two-family home $285 annually ($174 in water purchase costs, $56 in real property tax, and $55 in proposed debt service costs).
Town engineer Robert Lannon spoke on the condition of the aged lines, the majority being several decades old, and the need to greatly improve water pressure, both for current and future residential/commercial needs and for first responders.
"You have old cast iron systems throughout," Lannon said, as he held up what originally had been a 4-inch water line. "You can see it's no longer 4 inches. The rust inside here, it's what is called tuberculation, and that chokes the flow. Not only is this 4-inch line substandard by today's standards, it's also turberculated; so you're not going to get a lot of fire pull through that."
"That is one of the main reasons why we're going through upgrading, not only the size, but the material in the construction of the pipeline, as well. ... The symptoms throughout these nine areas are very common," he said.
That issue was echoed earlier in the public hearing by Village of Lewiston resident Les Myers, who serves as chair of the town Bureau of Fire Prevention as well as chief of Lewiston No. 1 Fire Co.
Speaking in favor of the waterline improvement project, Myers told the board it was first discussed by the town 20 years ago.
"Back then, the town had a survey conducted of the whole town water infrastructure, and identified many areas of the town that were insufficient for water flow," he said.
Myers explained the town has addressed some of the issues raised in that survey, "but not all of them. What the water improvement project is going to do is finalize all those problems identified over 20 years ago."
Myers recalled a serious fire on Lower River Road where fire responders had to call in a tanker to address low water pressure problems. It was something "normally that fire hydrants should have been able to handle" for a two-story house, he said.
"Again, the project will correct many deficiencies in the system," Myers said.
The Town Board is expected to revisit the water district/water line improvements at its work session on Monday, Aug. 14.
In other news from Monday:
•Ryan Parisi, attorney for the town, responded to a question by Sanborn resident RoseMary Warren on the lack of town response to a Freedom of Information Law request of Lewiston's transactions with KeyBank on its $153 per household New York Power Authority hydropower rebate program (article online at www.wnypapers.com). Parisi said the transactions on the matter with KeyBank are still in progress and no payments to residents have yet to be made.
"KeyBank is processing the disbursement of funds," Parisi said.
As a result, the town has yet to receive the information it would, in turn, furnish to the resident seeking the details.
•On a related matter, Town Budget/Budget Finance Director Martha Blazick received board approval for renewal of a five-year agreement with the Energy Cooperative of America - a company the town uses to manage its NYPA hydropower allocations and sell the excess energy for cash on the open market. The new ECA agreement approved by the board will cost the town $6.25 monthly for the service.
•Town Board members briefly discussed a Lewiston Planning Board meeting, held last week, where a concept proposal was heard for a 205-unit mixed planned unit development covering 80.2 acres in the Upper Mountain Road/Bronson Drive area by developers John and Joe Rubino of Williamsville. Board members learned a number of local residents had turned out in opposition to the yet-to-be announced plan.
Bill Conrad, deputy supervisor who also serves as Planning Board chairman, suggested the town reconsider a traffic study of the proposed site, last completed back in 1982 during earlier construction, as discussions continue with the developers.
More information on this, at the next town Planning Board session, set for 6:30 p.m. Thursday, Aug. 17.
Categories
NFP Sentinel Sentinel HP Feature List Top News Features