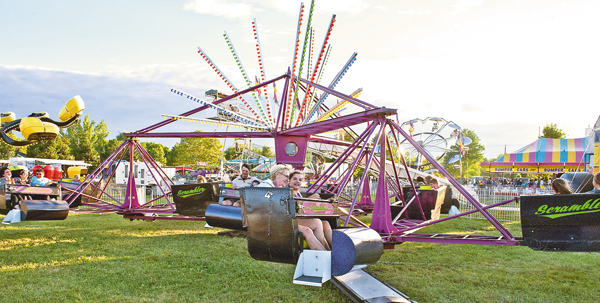 Families enjoy one of the rides at the Niagara County Fair.

Sat, Jul 29th 2017 07:00 am
By Isabella Casilio
More than 35,000 people are expected to attend the Niagara County Fair over its five-day run Aug. 2-6. The fair, held at 4487 Lake Ave. (Route 78), Lockport, will include local events, live music, shows, contests, food, rides and other attractions - making it the largest youth fair in New York.
The fair will feature a World of Wonders show that will include 11 acts that include fire-eaters, a world famous hula-hooper and illusion acts. There will also be an Aerial Escapes Explosion show that will focus on escape acts held 30 feet in the air. Another feature is the Hudson Magic Midway that will have operating large-scale replicas of rides from the '30s '40s and '50s.
The fair will also offer live entertainment each day, varying from modern country to classic rock performances. Some acts include Wasted Whiskey, The Release, Highway Lines and Pointless Bros.
"This fair has something for everyone: rides, magic, entertainment and pony rides," said Marc Ducharme, Cornell Cooperative Extension's PR and marketing coordinator.
Each year, numerous venders attend the Niagara County Fair. This year some of the vendors on hand include Boy Scout Troop No. 40, Louie's Pizza, Fowler's Taffy, The Meeting Place Restaurant and the Niagara County Farm Bureau.
"When you go out to the fair and spend a day here, not only are you going to have a great time, also the money is going to our programming which will benefit families for the whole year," Ducharme commented.
The theme of this year's Niagara County Fair, "Olden Days to Modern Ways," will merge the past with the present by featuring the "do it yourself" knowledge and skills previous generations relied on. Fast forward to modern times, there has been a resurgence of the "DIY" mentality, such as growing and preserving food and people making their own products and repairing what's broken with their own hands instead of hiring someone. Ducharme said today's growing appreciation for crafting and creating has many similarities to the "olden days."
"We see the resurgence of DIY and it works with the fairs theme since fairs have been around for generations and generations," Ducharme said. "It also goes along with what we believe and teach at Cornell."
4-H is also a big part of the Niagara County Fair. The 4-H members in Niagara County have worked all year to prepare their fair entries in the areas of animal science, plant science, social science, nutritional science, mechanical science and natural sciences. Home environment, consumer economics, leadership development, volunteer development are included as areas of 4-H topics.
These young people work to earn excellent (blue), good (red) or worthy (white) ribbons and to earn the honor of representing Niagara County at the New York State Fair.
"4-H is the root of the Niagara County Fair," Ducharme said.
Many children from the program hold exhibits all five days of the fair to showcase their talents. Exhibits range from fashion with children creating their own clothing to animal exhibits and animal shows. 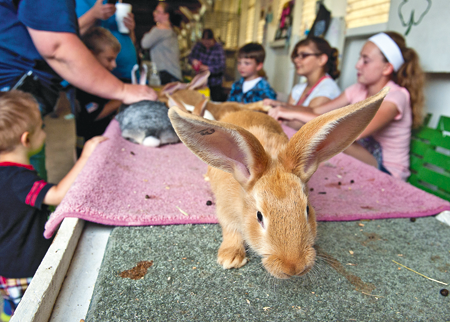 Many animals are contestants during 4-H competitions at the Niagara County Fair. Shown is a rabbit at a previous year's fair.
Also, the Niagara County Fair amateur pie-baking competition is open to any amateur pie baker of any age who is a resident of New York. No professional chefs, bakers or people who regularly makes pies for pay can participate. This event was created to expand ways community members could get involved with the fair.
"We haven't done anything like the pie baking competition. We thought it would be popular in this area and so far we've had a lot of people who have expressed interest," Ducharme said.
The judges will base their evaluations on categories, including first taste, crust, creativity and overall impression. Entries must be dropped off between 10 a.m. to noon on Saturday, Aug. 5, at the CCE Administration Building, 4487 Lake Ave, Lockport. No late entries will be accepted. The competition consists of seven categories: cherry, berry, cream, apple, grown in New York, peach and specialty. Closed judging will take place at noon on Saturday, Aug. 5. The awards ceremony is open to the public and will be held at 3 p.m. Saturday, Aug. 5, at the fair. There will also be a pie-eating contest this year, which is new to the fair. A pie sales area will be held at the fair to showcase the bakers and their creations, as well.
The 19th annual classic car show will also be held on Sunday, Aug. 6, at the Niagara County Fair. This event will be held rain or shine at 10 a.m. Registration is from 10 a.m. to noon, with judging from 1-3 p.m. and a showtime from noon to 4 p.m. The entry fee is $15 per car, which includes the driver and one passenger. The award ceremony will take place at 3:45 p.m. Plaques will be given to first, second and third place in several categories such as modified trucks, special interest/kit cars, foreign and radical street/race prepared. Prizes will be awarded to the participants in the show including dash plaques to the first 75 vehicles. Each year, over 100 entries participate in this car show, Ducharme said. A DJ will also provide entertainment at the event.
Homebrewers have entered the fair's second annual homebrew competition, which will be held Aug. 5 at the Niagara County Fairgrounds. Amateur homebrewers who are 21 years or older, who are residents of New York or Southern Ontario, were encouraged to apply. Entries are no longer permitted.
This competition includes five categories: IPA, pale American ale plus amber and brown American beers, dark British beer plus American porter and stout, Belgian, strong Belgian and Trappist ales and fruit and spiced beers.
The winner of the IPA category will have the opportunity to brew their winning recipe at 12 Gates Brewing Company with head brewer Scott Shuler, and have their brew served at the 12 Gates taproom and be distributed on draft around Erie and Niagara counties.
This event was brought back for its second year and highlights the overall idea of the DIY themed fair. The homebrew competition shows there is a resurgence of creativity at home and that people are creating things for themselves rather then going out to buy craft beer, Ducharme said.
Private judging will take place on Saturday, July 29. The winners of the homebrew competition will be announced and receive prizes at the Niagara County Fair at 4 p.m. Saturday, Aug. 5, on the small stage. Ribbons and prizes will be awarded per category, and for Best of Show.
A home wine competition will also be featured at the Niagara County Fair. This includes wines made by amateur wine makers who are 21 years of age or older. Entries are no longer permitted. Private judging will take place Friday, Aug. 5, and awards and prizes will be given at 11 a.m. Saturday, Aug. 6, on stage at the fairgrounds.
Admission to the fair costs $5 per person from Wednesday to Saturday, $3 per person or $10 per car on Sunday, or $18 for a weekly pass. Children age 6 and under enter free every day. The fair runs from 10 a.m. to 11 p.m. Wednesday through Saturday and 10 a.m. to 6 p.m. on Sunday.
For more information on the fair, its activities and performances, visit http://cceniagaracounty.org/niagara-county-fair.
Categories
Home feature NFP Sentinel Tribune