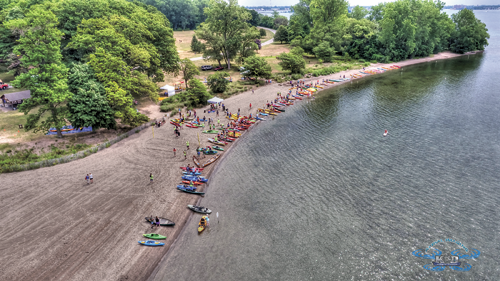 The new launch site for Paddles Up Niagara has been a big hit with participants of the event at Beaver Island State Park. (Photo by K&D Action Photo and Aerial Imaging)

Biggest Paddles Up ever anticipated

Fri, Jul 28th 2017 11:30 am
By Larry Austin
Island Dispatch Editor
Organizers of Saturday's Paddles Up Niagara at Beaver Island State Park anticipate the biggest turnout in the event's 12-year history.
"Weather looks like it's going to be great. Right now we have over 130 people preregistered for the event, which is the highest that we've had for preregistration," said Joe Menter, recreation supervisor for the Town of Grand Island and organizer of Paddles Up Niagara. Menter added two eco tours that are part of the event are both full, but there's still room in the early-morning and late-morning fun paddles.
Paddles Up, founded by Grand Islanders Paul Leuchner, is the signature event of the Niagara River Greenway Commission, which was established by the state in 2004 to plan and develop a greenway of interconnected parks, river access points and waterfront trails along the Niagara River from Lake Erie to Lake Ontario.
Menter said his aim for this year's Paddles Up is to build on last year's successes, adding, "One of our goals is to keep growing the event every year."
Menter said he toured the Paddles Up launch site at Beaver Island State Park with Jeanne Leccese, new executive director of the Niagara River Greenway Commission.
"We sat down and talked about it and went and looked at the location," Menter said. "One of the first questions she asked was, 'How many people do you think this space can hold?' Menter said the event could host probably 400 or 500 participants now, more than twice the number who have attended in the past. Beaver Island has room for expansion, though, he said.
"Looking at that, we could easily have 800 or 1,000 people comfortably in that space," Menter said.
The 2016 Paddles Up saw a change in starting point from Little Beaver to the beach that has proven popular with paddlers.
"That was a big thing. That was something people mentioned a lot last year," Menter said of the feedback he received from changing the departure spot. The old spot near the lagoon had room for only two or three kayaks to launch at a time, Menter said, and then paddlers had to navigate upstream against a current.
"So having that beach launch, we're able to launch 120, 150," Menter said. "And they're all able to launch at the same time ... and they're not bumping into each other."
Menter said in addition to the noncompetitive paddle, a paddle fair will include food trucks, sponsors and vendors. A beer tent will open up at 11:30 a.m. Menter said, "We do that specifically so it opens up after both paddles have started, so nobody's had any beer and then going out on the water."
Eight personnel from the town will help staff the event, supported by volunteers from Buffalo Niagara Riverkeeper and the Water Keeper Alliance.
Five certified safety paddlers on the water and instructors on land will help out as well, and volunteers will help people with parking and loading and unloading paddle craft to keep traffic going, Menter said.
"The biggest things are the new location that we used last year was a success, so we're trying to build off of that. Having that stronger partnership with the Riverkeeper and having Jeanne on as the new executive director and then that continued relationship between the Greenway, the town, and the State Parks is steering this event in the right direction and keep growing and provide a free fun event that people can come out and experience the Niagara River," Menter said.
••••••••
PADDLES UP NIAGARA 2017
The 12th annual Paddles Up Niagara will take place Saturday, July 29, at Beaver Island State Park, Shelter 2B, from 7 a.m. to 2 p.m.
Register online at www.bnriverkeeper.org/paddlesup.
Paddling Schedule
7-7:30 a.m. - Eco tour or Early Bird Paddle: Take a guided eco tour lead by Paddles Up founder Paul Leuchner and Department of Environmental Conservation Niagara River ecologist Tim DePriest. See the Niagara River restoration projects near Strawberry and Motor islands, a bald eagle nesting area, heron rookery and more.
11 a.m.: Non-competitive paddle: Paddle the waters and shoreline of Grand Island and Beaver Island State Park. This paddle stays close to shore and is suitable for paddlers of all abilities.
Paddle Fair
8:30 a.m.-2 p.m. - New York State Parks: "Try a Kayak" is for people thinking about getting a kayak.
WEKANU: Instructors from WEKANU will provide paddling skills and rescue demonstrations.
Food: The Grand Island Historical Society will provide hot and cold breakfast food and drinks starting at 6:15 a.m.; food trucks will serve from 8:30 a.m. to 2 p.m.
Vendors and Demos: Check out paddling merchandise and other goods from vendors including the New York State Parks Marine Division, WEKANU, Buffalo Niagara Riverkeeper, U.S. Coast Guard Auxiliary, Buffalo Geological Society and more.
•Event organizers: Buffalo Niagara Riverkeeper, Waterkeeper Alliance Splash Event Series by Toyota, Town of Grand Island, New York State Parks and the Niagara River Greenway Commission.
•Event sponsors: WEKANU, Anchor Marine, NYS Parks Marine Division, Cabela's, K&D Action Photography, Tops Friendly Markets, Grand Island Fire Co., Bill's Boatworks, Seabirds International, New York State Parks Niagara Region Interpretive, Flying Bison Brewing Company, Buffalo Coffee Roastery.
•Event vendors: Hamburg Natural History Society, Buffalo Geological Society, Grand Island Historical Society, U.S. Army Corps of Engineers and U.S. Coast Guard Auxiliary Flotilla 35 Grand Island.
Categories
Dispatch NFP