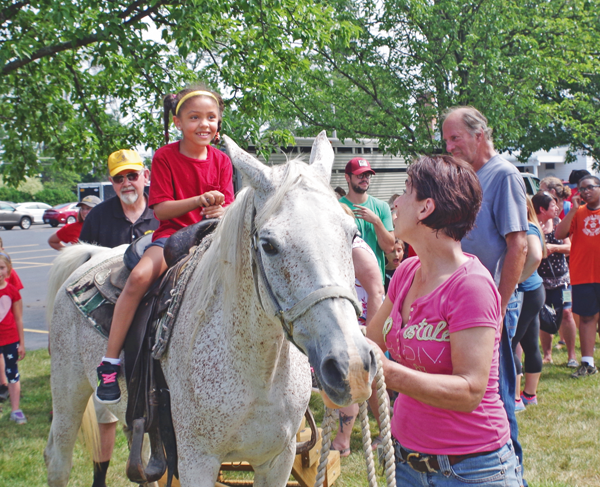 Donna Peffer leads Moriah, a horse from Sparks Trading Post, on a pony ride for one of the hundreds of children at the Grand Island Lions Club Special Kids Picnic. (Photo by Larry Austin)

Sat, Jul 22nd 2017 07:00 am
By Isabella Casilio
The Grand Island Lions Club on July 19 held its 59th annual Special Kids Picnic at the Buffalo Launch Club, an event that brought in over 1,100 kids with special needs and their chaperones. The kids got the opportunity to enjoy entertainment that included boat rides, pony rides, Shriner minikar rides, face painting and baton twirlers.
Lion Annette Boies-Lobl, picnic chairperson, gave credit to the 90 community volunteers involved in staging the event, and said, "We had certainly enough volunteers today; people who just show up ... which is really, really nice."
Eighteen out of 26 Lions from Grand Island were in attendance, and volunteers also included eight Lions from the Club of Merritton, Ontario, Canada, as well as members of the Knights of Columbus, St. Stephen Religious Education program, and Kenmore Boy Scout Troop 104.
"It is a tradition that this club has done for 59 years. We have such support, and if we did not have the Buffalo Launch Club supporting us with the use of their docks, there wouldn't be any ability to have this picnic," said Boies-Lobl.
A school new district brought students to the picnic, Lake Shore, which is independent of Erie 1 BOCES.
"One of the teachers called me up and said, 'Can we come,' and I said, 'Oh, sure,'" Boies-Lobl said. The teacher then said she would bring 105 students.
No problem. The Lions never turn anyone away.
Phil Sullivan, who supplied his 1986 Chris Craft boat, was a volunteer for his second year at the picnic, taking children for boat rides on the Niagara.
"It's a great thing to do, it's great for the kids and it's great for us, too," Sullivan commented.
The kids are not the only ones who learn and enjoy the picnic each year: teachers from several schools see it as an opportunity for not only the children, but themselves to learn more about how the children interact. Holly Bernys, a lead therapist with Erie 1 BOCES from a West Seneca school brought children from a summer school program. This event gives the OT teachers the opportunity to come see how the children act in the community and form ways they can help the children.
"It's just a fun summer activity that gets the kids outside and gets them to see each other because our sites are so separate," commented Bernys, "but a lot of them know each other from going to school together during the year."
Bernys also commended the Lions for how organized they were and the amount of volunteers that turned out to the event. She said the kids were looking forward to the picnic and were talking about it all week in school.
Sabretooth, the Lions mascot and Pringles the Clown were also seen engaging with the children during the event and putting smiles on all of their faces.
Kate Fonte of Grand Island, who visited the picnic with a kindergarten and first-grade class from Maryvale, enjoyed the picnic for the first time. "Opportunities for the children to experience new things like going on a boat ride for the first time or riding a horse was really amazing to see, and the confidence they gained from it was wonderful."
Sharon Battaglia, Rotary district governor from the Sheridan Drive club in the Town of Tonawanda, also volunteered for the first time at the picnic.
"I think it's a great event. It brings so many kids in and does something so special for them and it's fun. The Grand Island Lions are a very special group of people; they are very active in their community, they reach out for anyone that needs them," commented Battaglia.
The Lions also thanked Mount St. Mary's Hospital as a sponsor, the BLC for donating their facilities, the boat captains, Collins Marine who donated boats, the Excalibur Boat crew, Tops Markets, Tim Hortons and Dunkin Donuts for their donations.
Categories
Dispatch Dispatch feature Home feature NFP